A New Legacy is a whole different ball game

FORGET Wimbledon. Forget the Euros. This is the real sporting event of the summer.

In Space Jam: A New Legacy, basketball superstar LeBron James teams up with Bugs Bunny (yes, really) for a showdown to end all showdowns.

Give me five: Lola Bunny and LeBron James hit the court 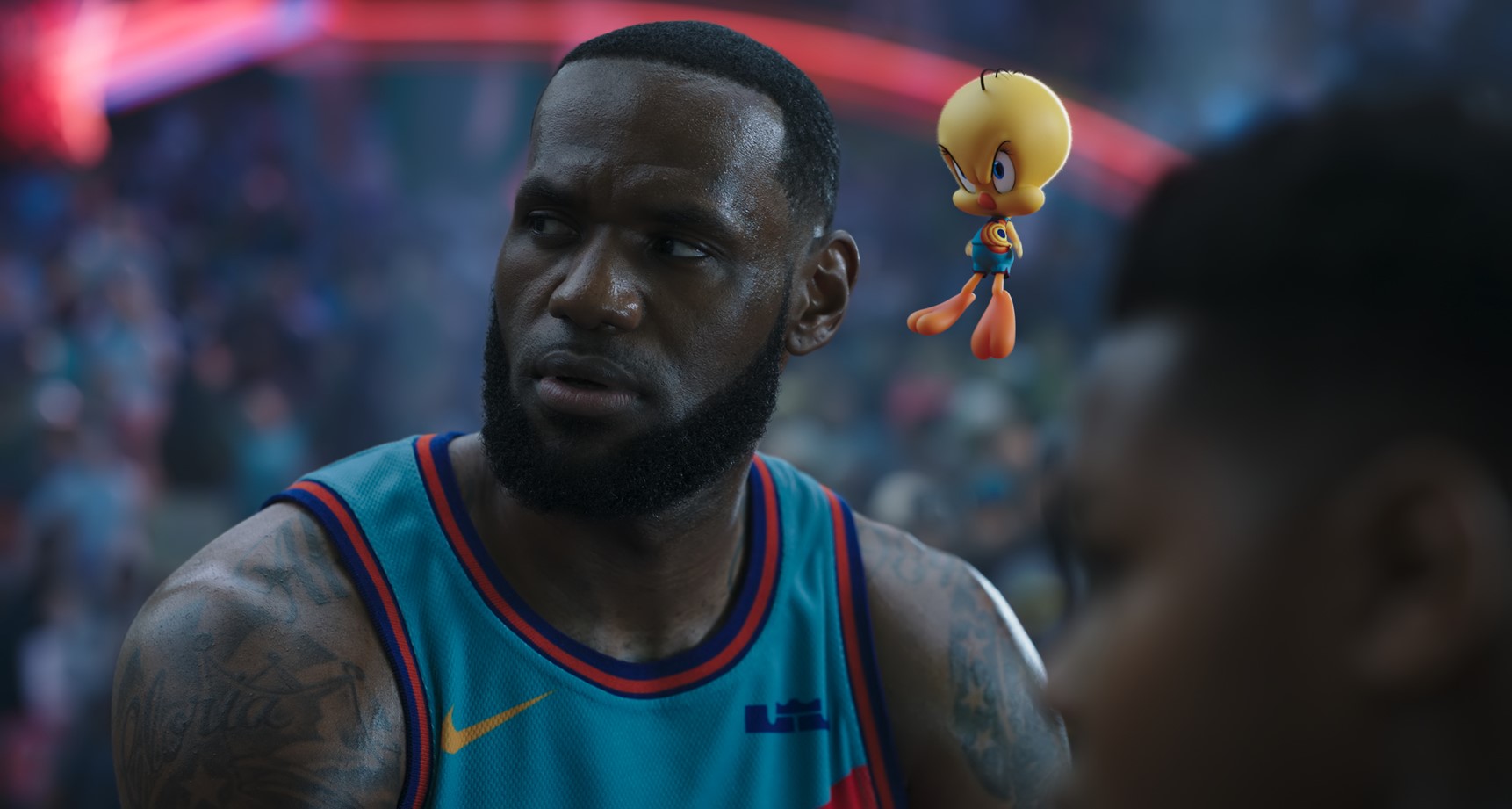 In the zone: LeBron stars alongside Tweety

From Bugs and Daffy to Porky Pig and Tweety, all your family’s favourite Looney Tunes heroes are in the mix for this funny, fast-paced family mash-up of live action, 2D animation and spectacular 3D CGI effects.

LeBron James stars as a dad who is perhaps a little too keen for his son, Dom (Cedric Joe), to follow in his acclaimed basketball footsteps. Dom, it’s clear, would rather follow his own dream to design video games. The two argue and that’s when things get a little weird…

Father and son take an elevator but get off on the wrong floor and find themselves suddenly plunged into a virtual server-verse, trapped by a rogue AI who wants to prove to LeBron that tech is mightier than real life. Evil mastermind Al G. Rhythm (Don Cheadle) holds Dom hostage and LeBron must take on a digital squad of hotshot basketball heroes (the Goon Squad) and win a match to get his son back.

Who has LeBron got on his team? Er, how about a motley crew of cartoon characters? 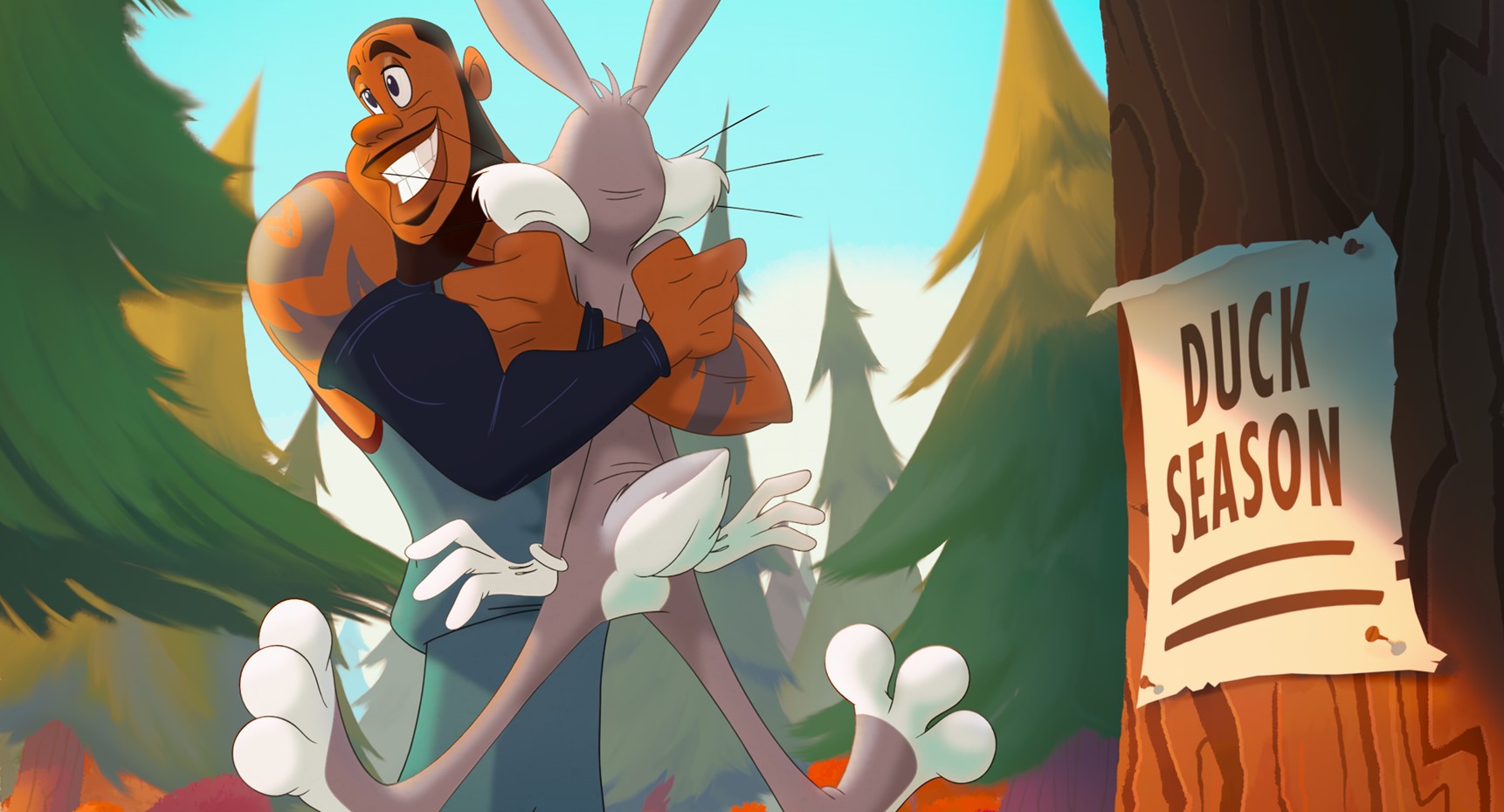 Give us a hug: the basketball player is transformed into a 2D cartoon

The perfect family day out

This reimagining of the 1996 hit Space Jam offers an all-new film experience perfect for getting back out to the cinema with your family this summer.

You don’t have to be a basketball whizz to enjoy the wisecracking thrills and spills of classic Loony Tunes humour mixed with warm-hearted drama as one of the greatest sports stars of all time has to win the match of his life! 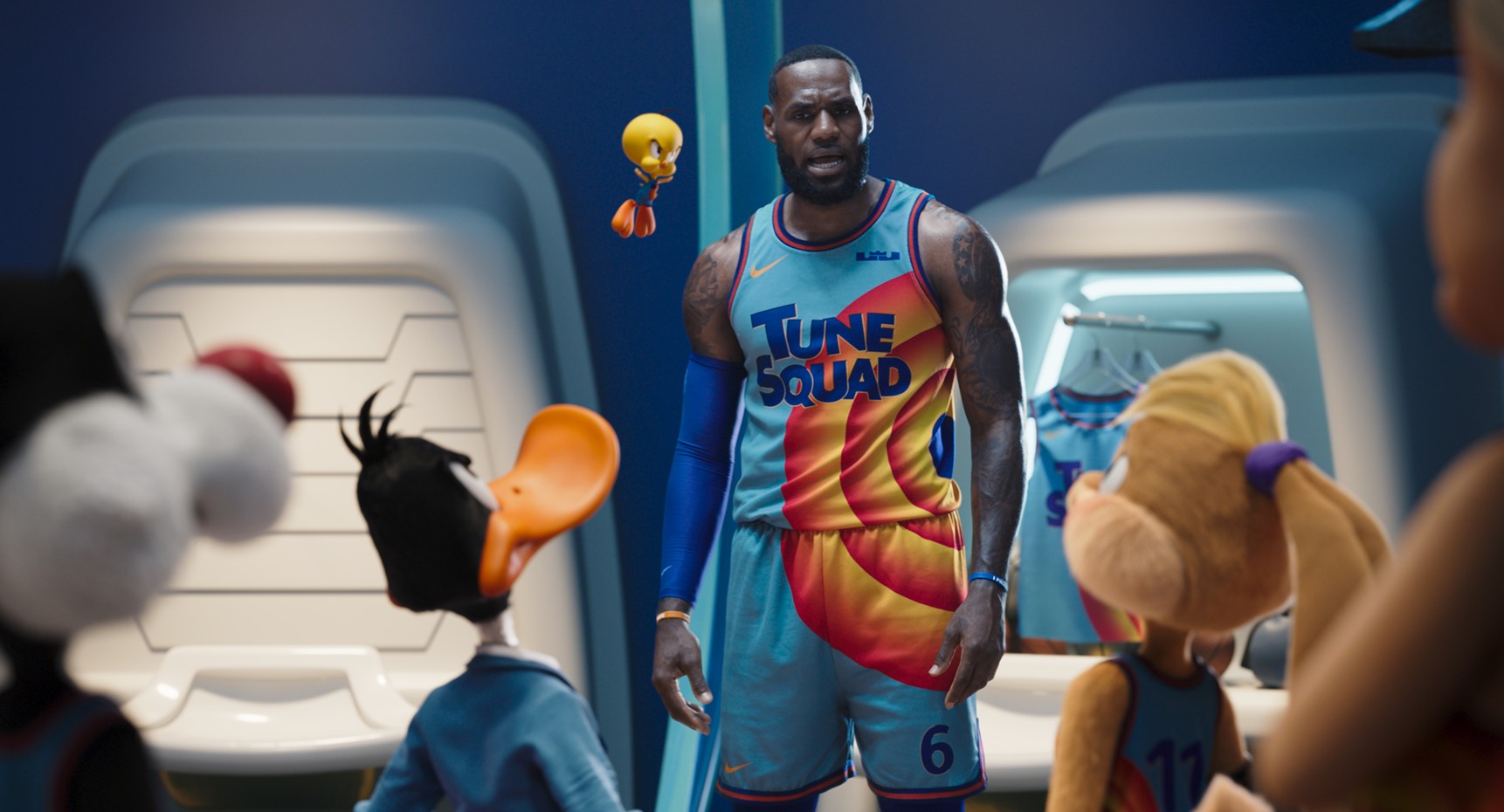 Fighting talk: can one of the world’s greatest athletes save his son?

It’s the Tunes v the Goons

As well as LeBron James, expect to see a few other familiar faces. Along with Bugs Bunny, who could be persuaded to put down his carrot for a dribble or three, there’s blustery rooster Foghorn “I say…” Leghorn, who is so big he gives LeBron a run for his money.

Then there’s Lola Bunny, who brings her smarts to the game. And hapless Daffy Duck who brings the dafts. Add Speedy Gonzales, Road Runner, Wile E. Coyote, Tasmanian Devil, Tweety and Sylvester the Cat, and you’ve got not just a squad, but your ultimate cartoon-lover’s dream team.

However, these animated legends certainly need to be good at basketball. They are up against the Goon Squad, which consists of digital professional basketball players with added superpowers.

Will dad save his son? Will their family be reunited? There’s everything to play for. No chance of a rematch or a reboot. You’ll be willing those cartoons on until the final whistle. 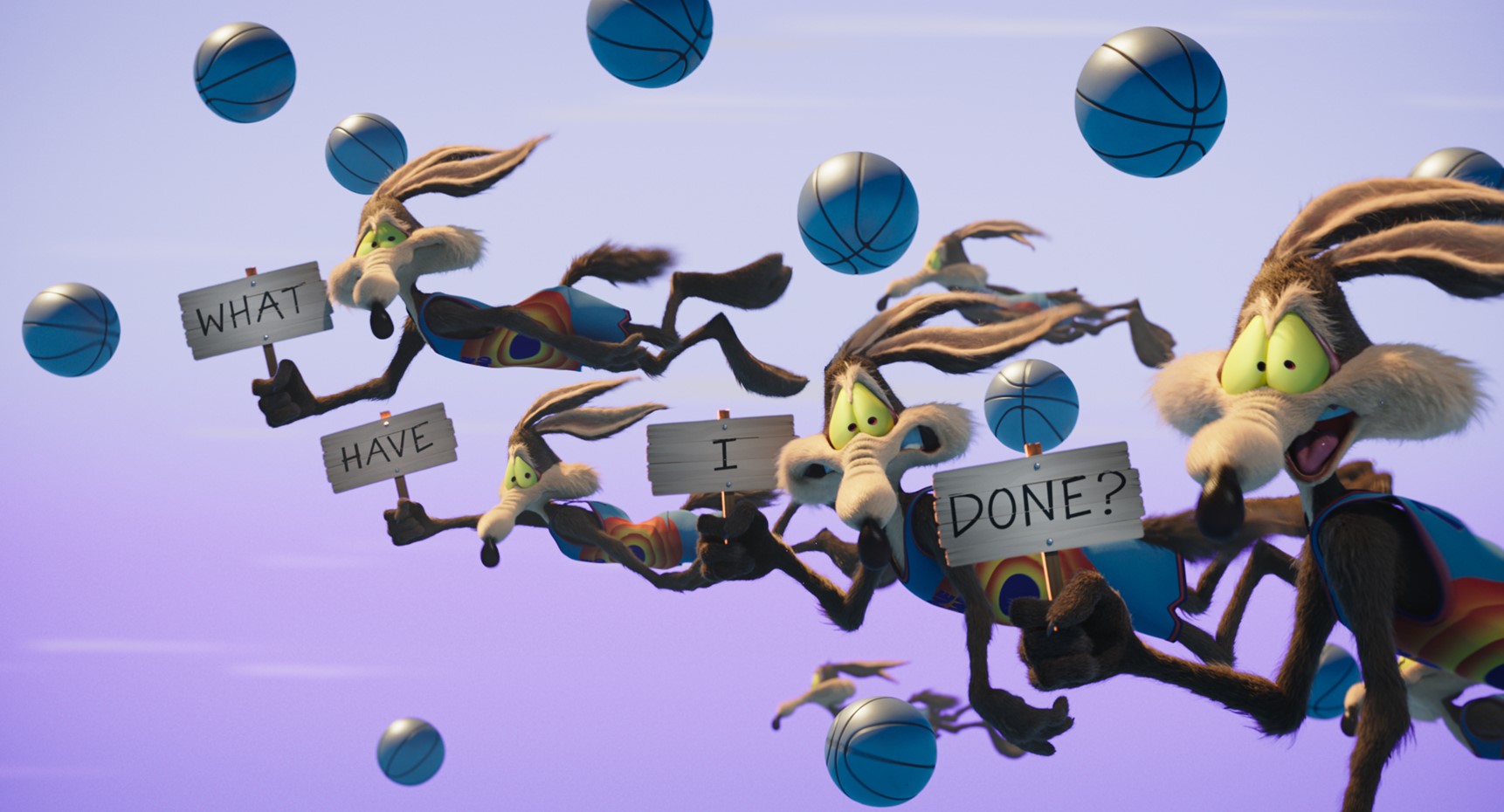 Space Jam: A New Legacy is directed by Malcolm D. Lee, who previously helmed numerous hits including Girls Trip. It has been put together with terrific attention to detail.

In the scene where LeBron is propelled into the digital universe, he hurtles past a collection of themed planets including Westeros, home of Game of Thrones; The Matrix; and The Wizard of Oz. And in the run-up to the big game there are lots of lovely in-jokes. Look closely at the crowds and you’ll spot countless familiar figures (space) jammed in, including Batman, The Flintstones, The Mask and many more.

This is truly a film with something in it for every family member, whatever their age. The pace never lets up as the action shuttles between real life and animation. We even get to see LeBron being “Tuneified” – turned into a cartoon character, which is not something you see on the big screen every day.

You certainly don’t need to be a basketball buff to enjoy this movie. Or know your alley-oop from your zone defence.

If you love cinema, you’ll be cock-a-hoop about Space Jam: A New Legacy.

Space Jam: A New Legacy. In cinemas from Friday.

You can book tickets at www.WatchSpaceJamMovie.co.uk 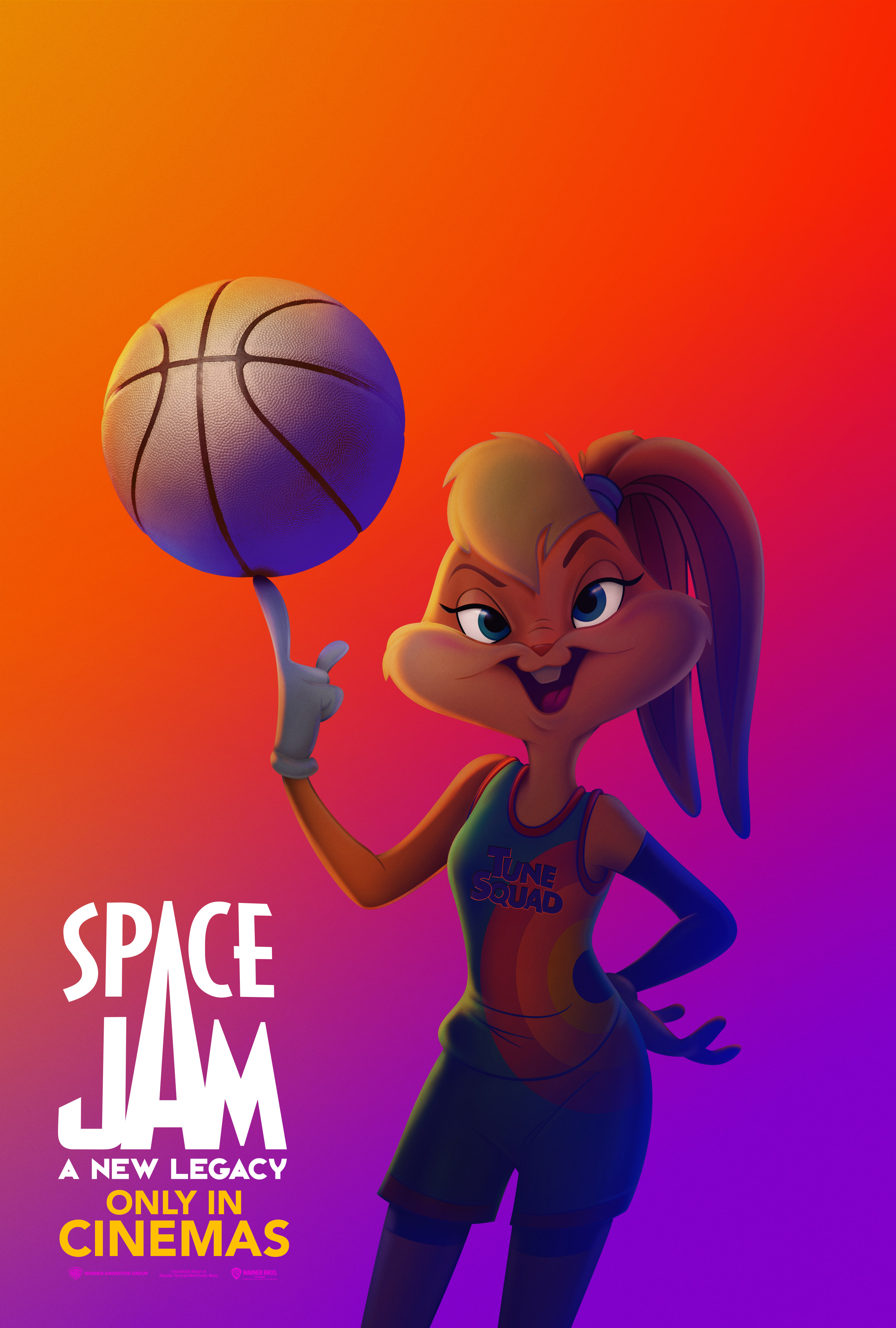