The Downton Abbey sequel has been pushed back again (Picture: Universal/PA)

The release of the highly anticipated sequel to the Downton Abbey film has been delayed by several weeks.

The forthcoming period drama, titled Downton Abbey: A New Era, was due to arrive in cinemas on March 18 but has been now pushed back to April 29 in the UK and May 20 in the US.

It had already faced a delay after bosses originally planned for a Christmas 2021 cinematic release.

The sequel will see the beloved characters go on a grand journey to the South of France to uncover the mystery of the Dowager Countess’ newly inherited villa. 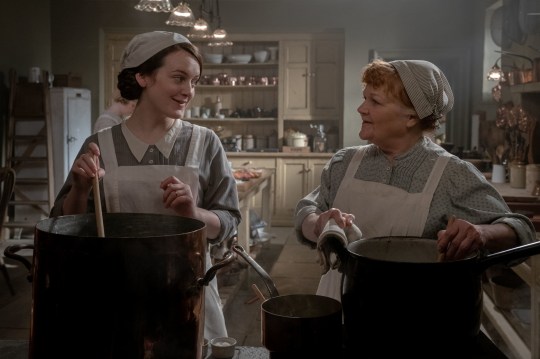 Sophie McShera and Lesley Nicol in a scene from the sequel film (Picture: Ben Blackall/Universal/PA)

Speaking to Metro.co.uk in December, Dockery described the sequel as ‘a really fun film’, which she admitted at the time was ‘all I can tell you’!

Of the shoot, she added: ‘It was brilliant. We’re like a big family so it’s always really fun going back, and we had so much fun.

‘I’m really excited for audiences to see this next film.’

Downton Abbey began life as a TV series, airing on ITV from 2010 to 2015 and following the fortunes of the aristocratic Crawley family and their downstairs servants at a Yorkshire country estate.

The first film, released in 2019, followed a royal visit to the Crawley family and Downton staff.

Show creator Julian Fellowes returned to pen the script for the follow-up, while Simon Curtis, whose credits include My Week With Marilyn, directed it.

Downton Abbey: A New Era will now open in UK cinemas on April 29 and US cinemas on May 20.