For more than a decade, Downton Abbey has had viewers hooked, with the spectacular costumes being a huge part of its success.

Lasting for a five-year run, the show’s success didn’t end there, with its second film, A New Era, about to be released.

Aside from blessing us with a new lot of Downton magic, the new film sees the characters becoming more modern than we’ve ever seen them – and there’s nothing that shows that better than the absolutely stunning costumes.

Costume designer Anna Robbins opened up to Metro.co.uk about what goes into the elaborate clothes and what we can expect.

‘What I’m really proud of in this movie is how we were able to move it on from the first film without it feeling like a massive jump from what we know and love about the characters and Downton,’ she explained.

‘That’s partly due to Julian [Fellowes]’ wonderful script which gave us incredible settings, different worlds to explore. We were able to look at different aspects of their personality, what they would wear on holiday, what they’d wear when they’re working and just giving different facets of the personality.’

Lady Edith is the picture of a modern woman 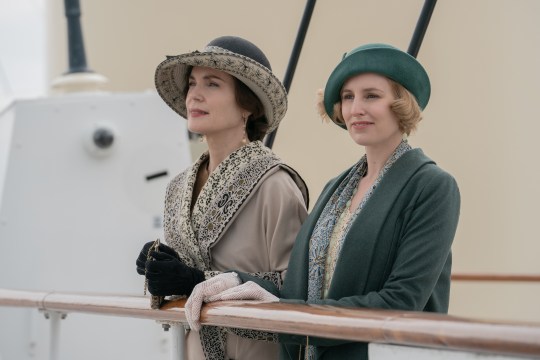 There’s got to be someone who’s at the forefront of new trends and, in Downton Abbey, that’s Laura Carmichael’s Lady Edith.

‘Every character is on a journey and within this film we were able to look at that journey as a continuing thing,’ Anna explained.

‘Particularly with Lady Mary (Michelle Dockery), we wanted to reflect a softer side to her in this film, and we looked at that softness and pallet through fabrics, through textiles, and just creating something that felt slightly less angular and sharp which suits her and looks amazing but this is about finding a different side to her personality.

‘And we took her more towards the 1930s, finding her waist again, looking at 1930s silhouettes that were starting to emerge.

‘The counterpoint to that was taking Lady Edith to the south of France and putting her into trousers. Those pyjama sets on the Riviera at that time were all the rage and Lady Edith would have embraced that as a liberal thinking modern woman of the time. She’s a working mum, essentially, and she would have been that person to embrace that look.’

‘Authenticity is incredibly important to me on this film,’ Anna explained.

‘Downton is known for its historical accuracy but it can’t be 100% accurate, because we’re telling a story from a 21st century perspective.

‘I think of myself as curating from that time so you’re picking pieces that should feel accessible, aspirational and incredibly beautiful to the modern eye and that’s what you’re putting together but in terms of how I design, I love to use original pieces where I can.

‘Even if that’s a fabric, a button, or a piece of jewelry, you’re still anchoring it to the time it’s set in and I think that gives it the authenticity whereas the colours, the textiles, and the fabrics – I shop far and wide for velvet that looks like 1930s velvet because they just look and behave so different to modern velvet.’

The Dowager’s costumes show her settled sense of self 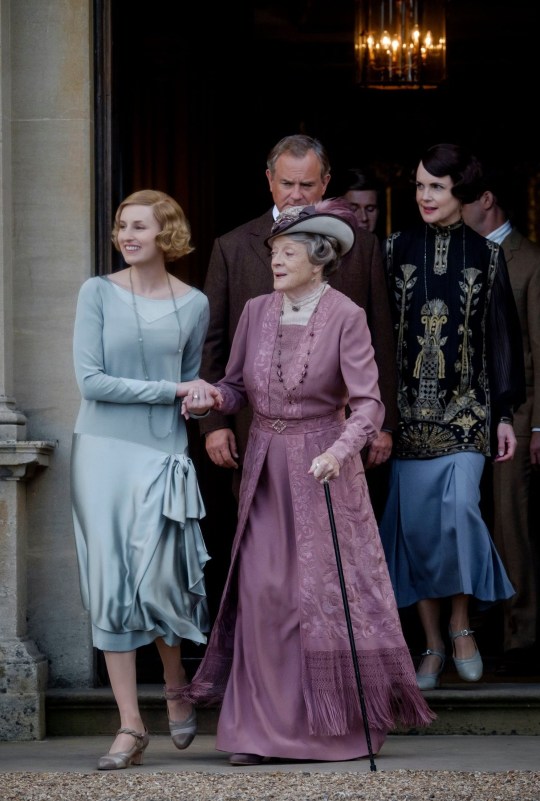 For the older generation, such as Maggie Smith’s Dowager, styles are less likely to change – but that doesn’t mean there’s not still a huge amount to think about.

‘There’s definite signatures for the Dowager, silhouettes and shapes that we don’t look to change because they become quite set in their looks and those looks become quite classic and they stay relatively the same as they get older,’ Anna pointed out.

‘There’s Victorian and Edwardian influences in the Dowager’s costumes that will never go in the same way that Cora (Elizabeth McGovern) will probably settle into a silhouette and a frame and a shape.

‘The young, ever-changing fashion is for younger generations and as they get older, that will settle. So we’re always looking at the Dowager with her settled sense of herself and her identity that she’s created herself and that might be the high-necks, the layered sleeves, the Edwardian silhouette in terms of waist, the fact that a character of that generation would still be corseted compared to the younger generations who lost them.

‘The Dowager’s hem lines have never come above the floor. But what we have looked to do in moving things on is look at textile trends.’

Anna added that it’s about ‘getting in little markers of where she is in time but applying them to this very recognisable silhouette.’

The wedding dress was one of the most expensive (Picture: Focus Features)

‘In terms of expense, when you add in authentic period jewlery, you’re always going to up the ante,’ Anna added.

‘Lucy’s (Tuppence Middleton) bridal ensemble, [royal jeweller] Bentley & Skinner very kindly loaned us this beautiful pearl and diamond tiara and a diamond brooch and they definitely made her costume one of the most expensive.

‘If you looked into that costume in terms of the hours that went into it, it was weeks and weeks of hand-sewing, of research and design, making, fitting, stitching, so in terms of the craft on the costume, it’s a really invested costume which makes it valuable as well.

‘1920s original pieces aren’t cheap in terms of vintage – they are expensive because of the craft involved. The fabrics are just irreplaceable and they’re becoming scarcer and scarcer.