Timothée Chalamet is set to reprise his role in the sequel to Dune (Picture: Warner Bros/Legendary)

Dune: Part Two is officially on the way, with Timothée Chalamet and Denis Villeneuve set to return for the sequel.

The original film is currently enjoying huge success at the box office, and so it will come as a surprise to no one that another chapter has already been given the green light.

Legendary and Warner Brothers confirmed on Tuesday that the second in the Dune series will be hitting theatres in October 2023.

According to Deadline, Canadian filmmaker and Dune director Villeneuve said he ‘just received news from Legendary that we are officially moving forward with Dune: Part Two’.

He continued: ‘It was a dream of mine to adapt Frank Herbert’s Dune, and I have the fans, the cast, and crew, Legendary and Warner Bros. to thank for supporting this dream.

‘This is only the beginning.’

In a statement, Toby Emmerich, Chairman of Warner Bros Picture Group, added: ‘Denis Villeneuve has crafted a film that is both visually extraordinary and emotionally transporting, as evidenced by its global success both critically and at the box office.

‘We are thrilled to continue on this journey with Denis and his cast and crew, and our partners at Legendary, and can’t wait to bring the next chapter of this epic tale to theaters in October 2023.’ 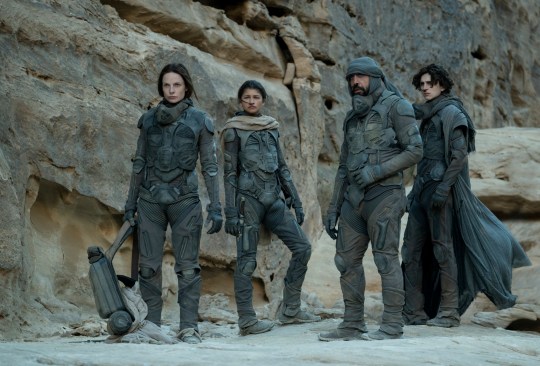 A spokesperson for Legendary said the company was ‘pleased to officially move forward with Dune: Part Two’.

‘We would not have gotten to this point without the extraordinary vision of Denis and the amazing work of his talented crew, the writers, our stellar cast, our partners at Warner Bros., and of course the fans! Here’s to more Dune.’

The film’s lead actor, Chalamet, is expected to reprise his role as Paul Atreides in the epic adaption of the 1965 novel.

He took to Twitter this evening where he shared a poster, that simply read: ‘Dune Part Two’.

Chalamet recently told Metro.co.uk the role ‘feels like a total f**king dream come true, and like I’m pinching myself!’

He added: ‘I feel like it’s the lead character thing and it’s also the Hans Zimmer thing, because these are the kinds of movies he does. [I’m] very grateful, very grateful.’

Dune: Part One is in theatres now.

Alec Baldwin has claimed that he “didn’t pull the trigger” on the gun that killed cinematographer Halyna Hutchins and injured...