I was eagerly waiting for the day that I’d be able to find stories and actors who looked more like me (Picture: Marvel Studios/Julia Dalrymple)

As a child, living in Nigeria, I watched Chitty Chitty Bang Bang on repeat.

While I loved it, I remember asking my parents why there was no one who looked like me. I spoke English, too, like in the film – but everyone on screen was white.

Even the films and TV shows I religiously watched every Saturday night, like The Incredible Hulk, Knight Rider and The A-Team, had mainly white casts, too – with the odd Black character, but almost never any Asians.

Asian characters were in shows like Mind Your Language, but they were nothing like I was – and always shown in dim light. And, even after moving to London aged 12, popular TV shows like The Bill, Neighbours or Eastenders, back then, had few background characters of colour – let alone playing main leads.

Because of this, I saw my future in a linear way – never seeing the option of doing what I really loved, which was working in TV, cinema and music. Had I seen myself on screen, or even in the credits (that I would scour, looking for ethnic names), I would have jumped into pursuing my passions much earlier, and fought for it.

I was eagerly waiting for the day that I’d be able to find stories and actors who looked more like me.

So it’s safe to say that  I jumped with joy when Chinese born, UK/US-raised Oscar winner Chloé Zhao was hired to direct Eternals – making her Marvel’s first woman director of colour.

Truthfully, I wasn’t seeking out Marvel and DC comics until I married my British Nigerian husband, who is an avid graphic novel collector. He took me to see Marvel’s Iron Man in 2008, and I loved the storylines so much, the lack of diversity didn’t really hit me then.

But I felt frustrated when Deadpool came out, and saw the South Asian character playing a cab driver. This trope was seen so much already, and I knew there was so much more to people from Asia, with the talent to boot.

So, when I discovered Zhao would be taking the lead for new film, Eternals, the feeling was akin to when Kamala Harris, who is Tamil like me and half Black, took the position as USA’s first female Vice President.

Eternals is about 10 God-like beings with superpowers that have been sent by their creators, The Celestials, to protect the world from monsters called Deviants.

Usually, most superhero films have a similar end goal: Good vs evil, and saving the world, but this time, it’s with a strong, welcome burst of diversity.

The characters mirror the world we live in, in a way no other Marvel offering has given us. We get an LGBTQ+ married couple, with Phastos played by Black actor Brian Tyree Henry and Emirati born Lebanese actor Haaz Sleiman.

The mixed race marriage between Sersi, played by British East Asian Gemma Chan and Ikaris played by Scottish actor Richard Madden, was so relatable to me, like my own mixed marriage.

Normalising these kinds of relationships is something that means a lot to me, as many couples have to fight family and society, to be accepted for simply falling in love and building a future.

One of the most exciting characters for me, though, was super fast Makkari, played by hard of hearing actress Lauren Ridloff – a case in point, that having a disability need not stop someone being a superhero.

In 2014, James Gunn’s Guardians of the Galaxy franchise brought us some bursts of ethnic mixes, but Eternals gives a somewhat equal footing and screen time to these characters of colour.

Greek mythology, which is also predominant in Eternals, has a lot of parallels with ancient myths that I was weaned on, as Hinduism is my ancestral religion. The character of Thena (essayed to perfection by Angelina Jolie) is like Hindu Goddess Durga who uses her feminine energy, her ‘shakthi’ to conjure up weapons from the Gods to fight evil. 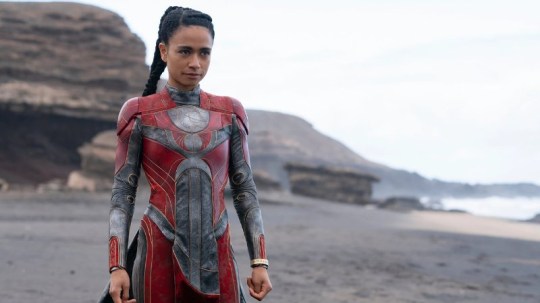 One of the most exciting characters for me was super fast Makkari (Picture: Marvel Studios)

Watching this come to life in a way I’ve never seen the Goddesses depicted in cinema was a huge deal for me, as I’ve always craved to see empowered women on screen, and Hindu Goddesses for me have been just this – women who battled for justice and did it with style, just like the women in Eternals.

My heart swelled with pride seeing Nanjiani dressed up in Pakistani traditional wear at Eternals world premiere, and eating biryani at Darjeeling Express when he was in London for the UK premiere. He’s boldly championing his roots, and I’m here for it.

It’s not the first time a superhero franchise has moved to a more diverse cast, though. Black Panther (2018) was a rousing success, showing that audiences were keen on such stories and that they wielded box office clout.

The making of Eternals is a big stride for representation, and like when my British Nigerian niece wanted to become a scientist after seeing Shuri in Black Panther, this idea that a child can see themselves in mainstream culture really holds – it impacts their future choices, and also builds up their self esteem, to see that they too can do big things.

With Eternals, Marvel plugged a lot of gaps from the past as they have taken the chance of changing characters from comic books to fit a more wide model of how the world looks. Building on this can only be a good thing, and showcasing marginalised, underrepresented people is essential going forward, as we are just beginning to scratch the surface of diversity in the mainstream.

My wish is to see conscious casting, and also care taken when writing characters, by investing in diverse writers rooms, and casting fantastic multicoloured talent.

The doors are now open, and it’s up to the producers of film and TV to take this to the next level, showing that a superhero can look like you or, finally, like me.