Hannah Cloke, a professor of hydrology at Reading University, said a “monumental failure of the system” contributed to the deadliest natural disaster to hit Germany in decades.

Receding floodwaters have left a trail of damage in their wake 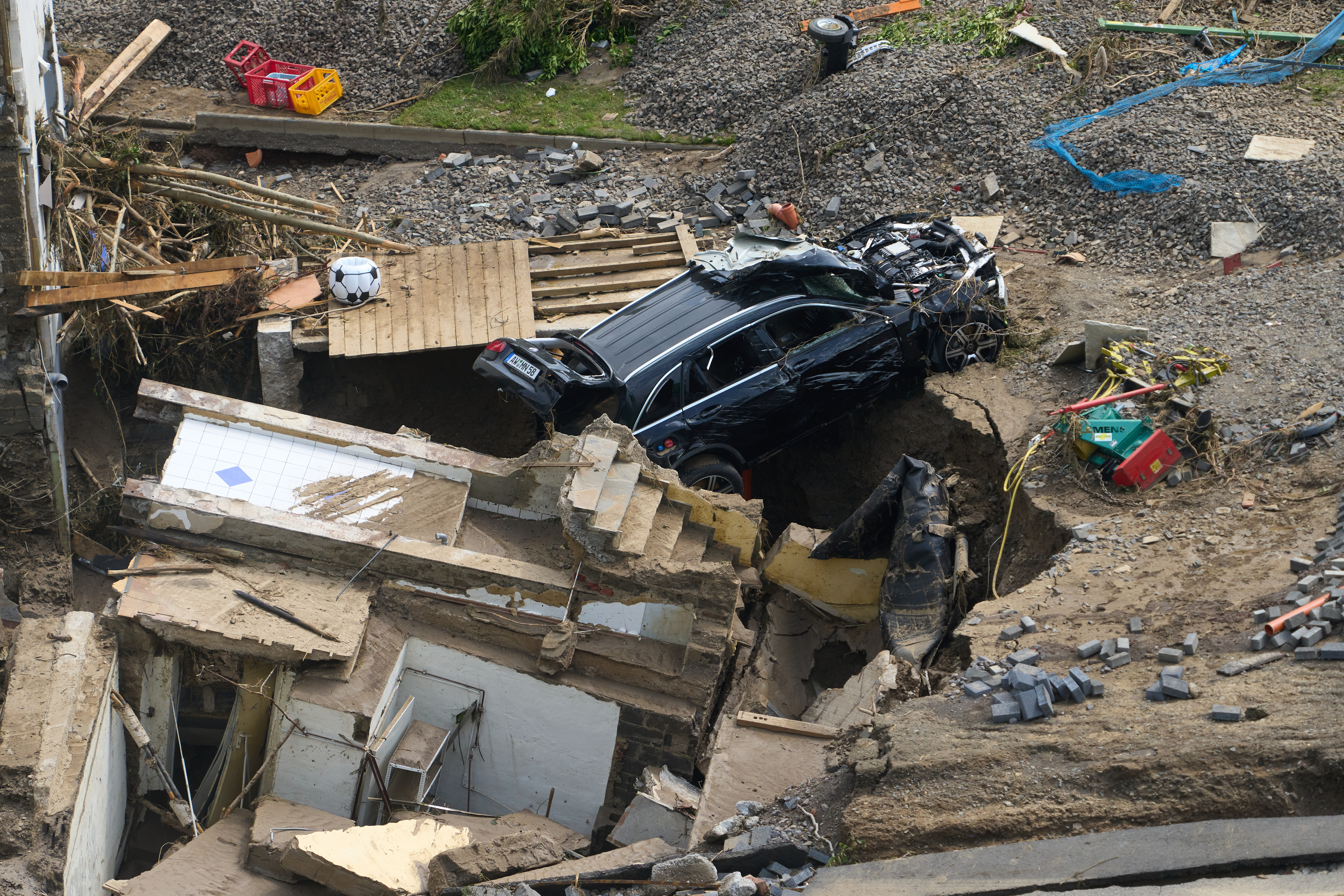 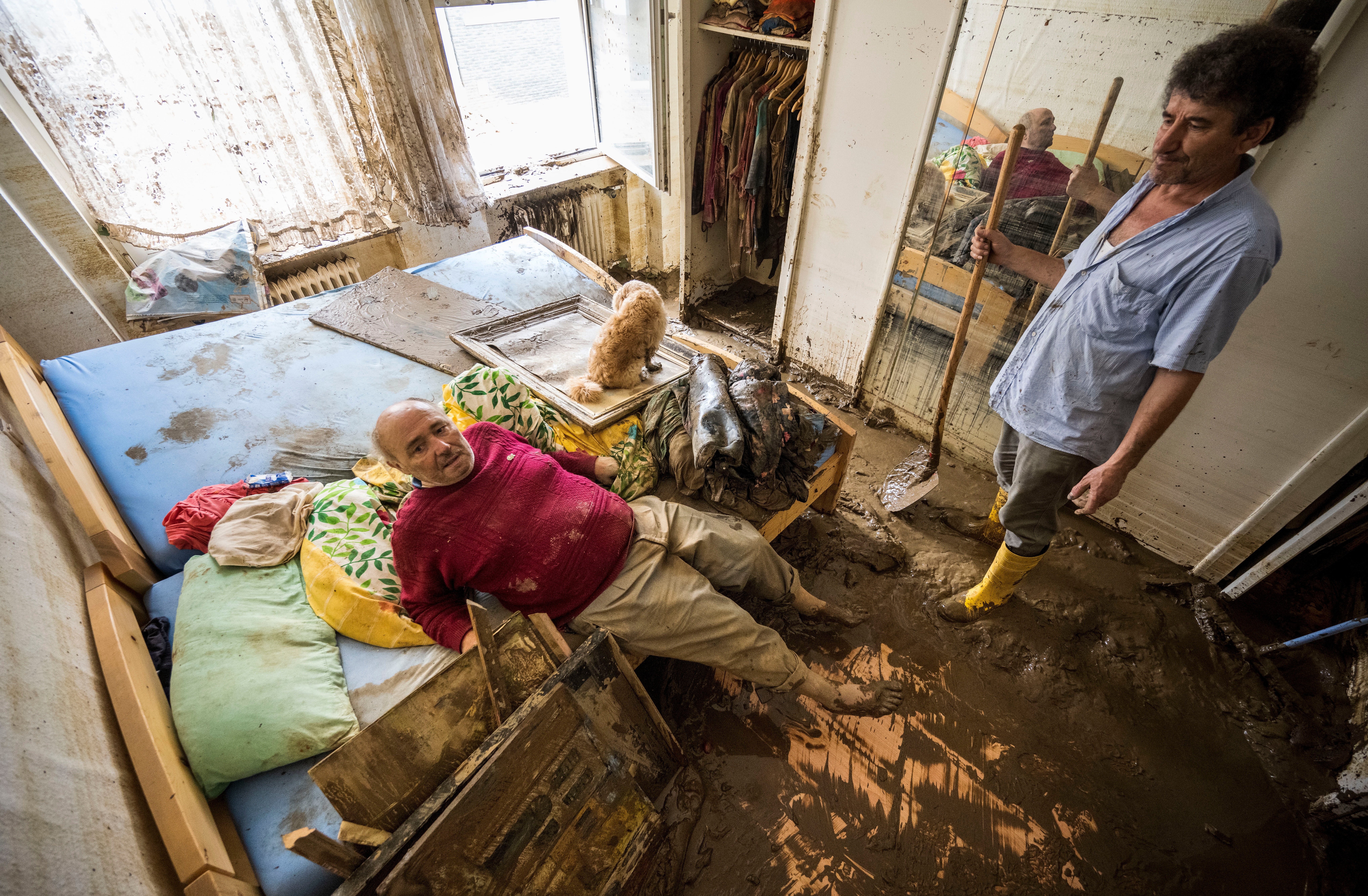 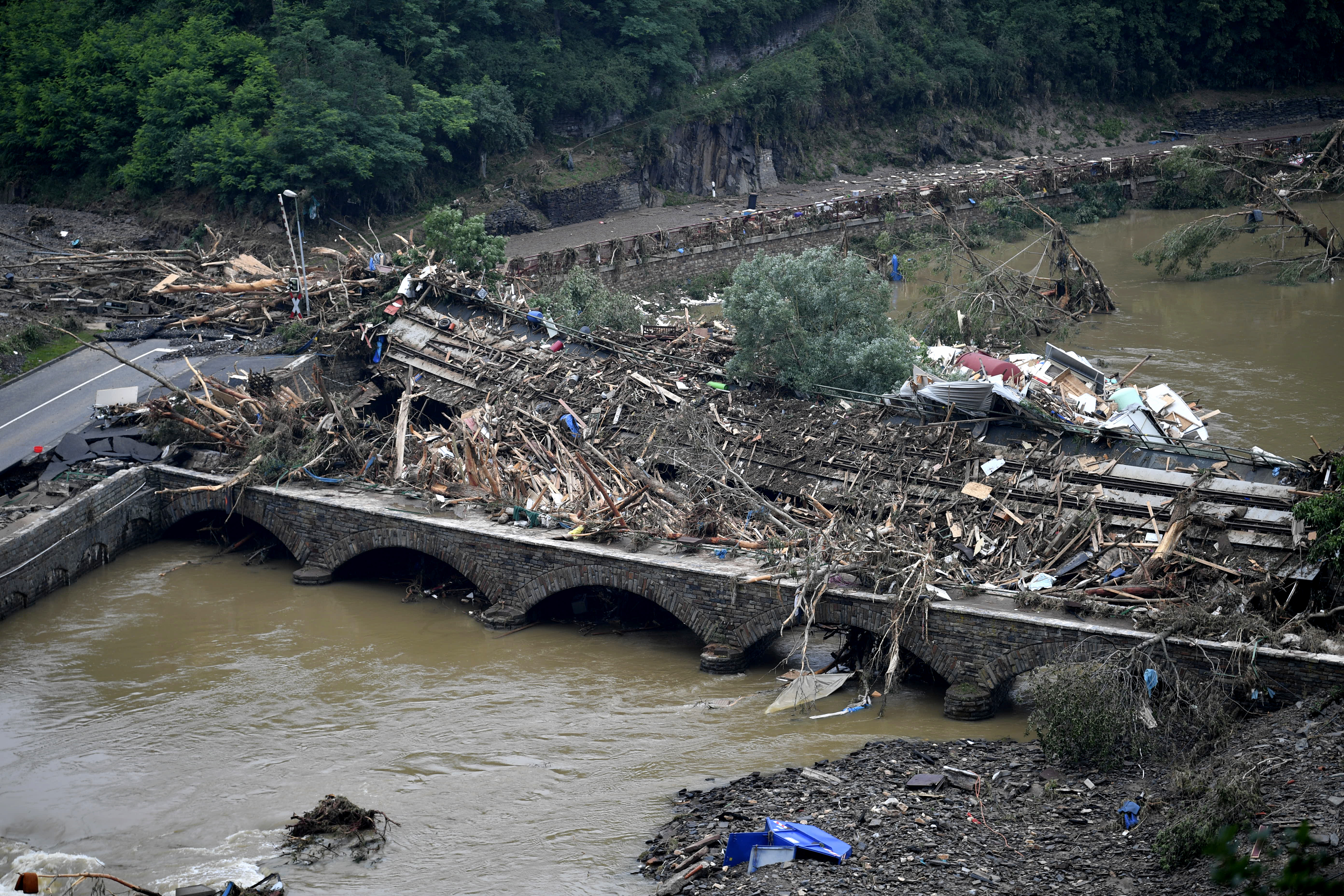 Two bridges at the river Ahr are blocked by rubble in Altenahr, western GermanyCredit: AP

More than a month’s rain fell within 48 hours across parts of western Germany, Belgium and the Netherlands since Thursday, claiming 170 lives and forcing thousands to evacuate their homes.

She told the Times: “I’m disappointed that particularly in the cities you had people washed away. That suggests that lots of things are going badly wrong.

“It’s no use having massive computer models predicting what’s going to happen if people don’t know what to do in a flood.”

The German Government faces mounting questions over how many lives could have been saved had at-risk areas been evacuated earlier and the gravity of the situation been conveyed sooner.

Rescue workers are in a race against time to save those stuck in floodwaters amid mounting concerns of a fresh disaster as more heavy rains are forecast for the weekend.

One dam close to the Belgium border, the Rurtalsperre, is at risk while another, the Steinbachtalsperre, is on the brink of collapse.

Residents are being told dykes along one river from Belgium to the Netherlands is at risk of disintegrating.

Large parts of a dam near Cologne have broken away and there is “enormous pressure” on the structure due to high water levels, a German official warns.

At least 170 are dead in Germany and Belgium in what the media is dubbing a “flood of death”.

Police said that more than 98 people are believed to have died in western Germany’s Ahrweiler district – one of the worst-hit areas.

Another eight people have been confirmed dead in Rhineland-Palatinate, officials said, bringing the region’s total death toll to 98 as of Saturday evening.

In neighbouring North Rhine-Westphalia, another 43 were confirmed dead, taking Germany’s overall total to 143.

Up to 1,300 are still reported as missing, though the exact number is unknown because phone networks are down and people have been rushed to hospital without ID.

In Sinzig – a small town 16 miles south of Bonn – 12 severely disabled residents drowned while trying to escape their care home.

One male resident was heard screaming for help for hours in the water, which swiftly breached the home and “swept away” those inside. It’s unclear if he survived.

It looks like a bomb went off. Everything’s destroyed. There’s nothing left of the city centre.

Managing Director Stefan Möller said the water rose too rapidly for an evacuation.

“The residents were not alone. We had a night watchman in the neighbouring house. But when the employee came over [to evacuate], the tidal wave came. He couldn’t get out and couldn’t help. It’s terrible,” he said.

“It looks like a bomb went off. Everything’s destroyed. There’s nothing left of the city centre,” Michaela Wolff, a winemaker from one of the worst-hit towns told the Guardian.

Michaela’s wine cellar was the only one in her village of Bad Neuenahr-Ahrweiler to survive the deluge.

“We have water and we have electricity. The gas has been shut off, but we have more than most,” she said. “It’s chaotic, absolutely chaotic.”

“Everything is completely destroyed. You don’t recognise the scenery,” another business owner in the same town said fighting back tears.

More than 22,000 emergency services are working on search-and-rescue operations in North Rhine-Westphalia, according to the state government.

“Anything is possible. We do not know what we will find in the cellars,” a fire department chief told Sueddeutsche Zeitung newspaper.

Locals have also come to the rescue.

Renato Yez, a 54-year-old lorry driver from Niederzissen, saved a woman’s life after he heard her cries for help and assisted rescue teams pull her out of the water, local media reports.

Another resident recalls “containers and cars afloats [as well as] gas containers, faeces and puddles of oil,” floating around as he attempted to rescue a group of stranded horses.

He said the flood disaster is “beyond our imagination”, adding: “We have met people who have lost everything. The greatest loss has to be borne by those who have lost relatives in the floods.”

State premier Armin Laschet, who is tipped to succeed Chancellor Angela Merkel in September, said the flooding was a “catastrophe of historic dimensions”.

“The floods have literally pulled the ground from beneath many people’s feet. They lost their houses, farms or businesses,” he told reporters.

Meanwhile, the death toll in Belgium has risen to 27 as emergency workers scramble to find survivors amid the debris.

Belgian officials added another 103 people were still “missing or unreachable”.

Details and pictures of the last contact with people who are unaccounted for were published in German newspaper Bild – as part of a campaign to help find missing people.

Among the missing is one family – dad Hans Neufeld, 71, mum Ella, and their son Frank, 22 – submitted by the couple’s eldest son Harry. 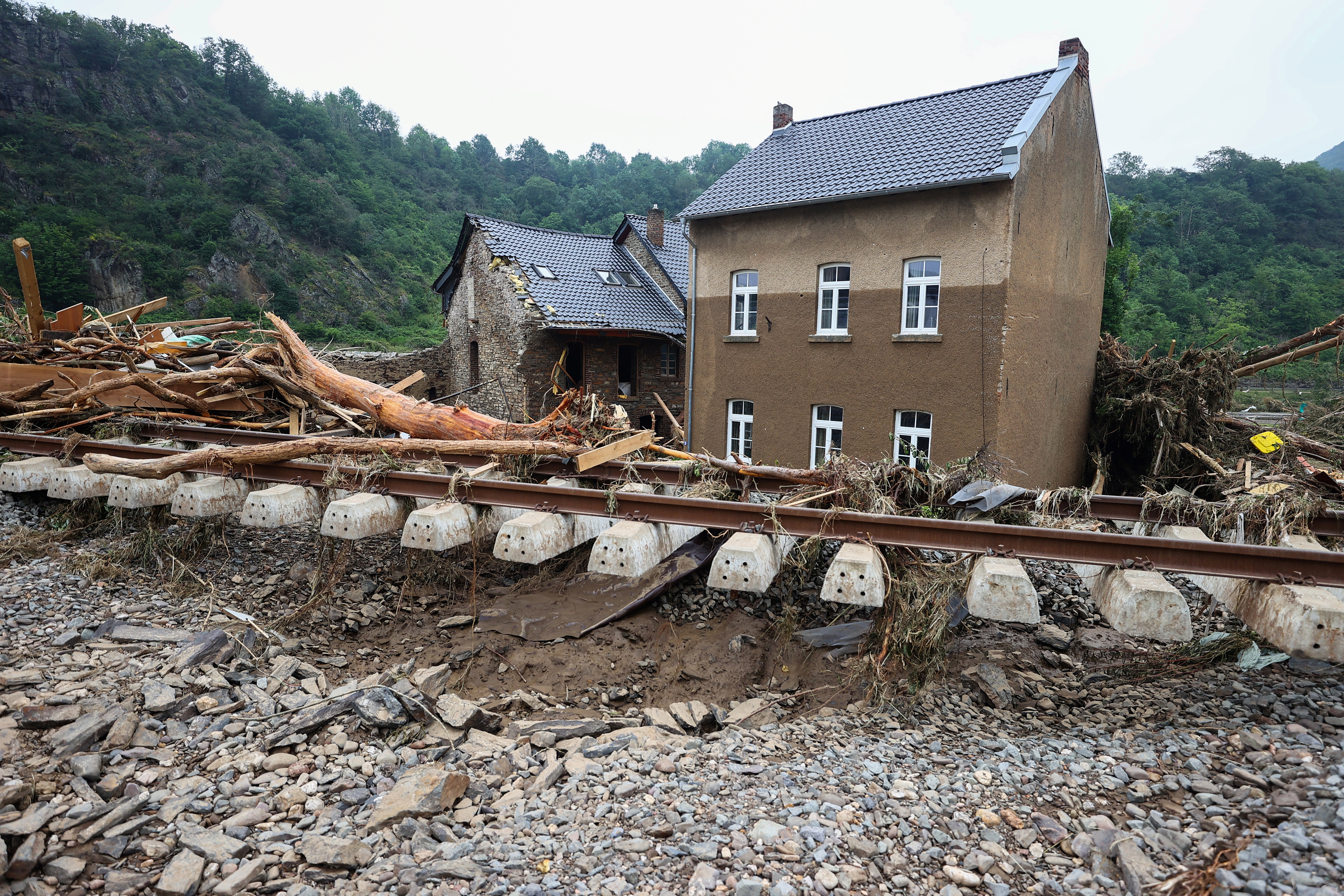 A view of broken trees and debris on a railway track following heavy rainfalls in Kreuzberg, GermanyCredit: Reuters 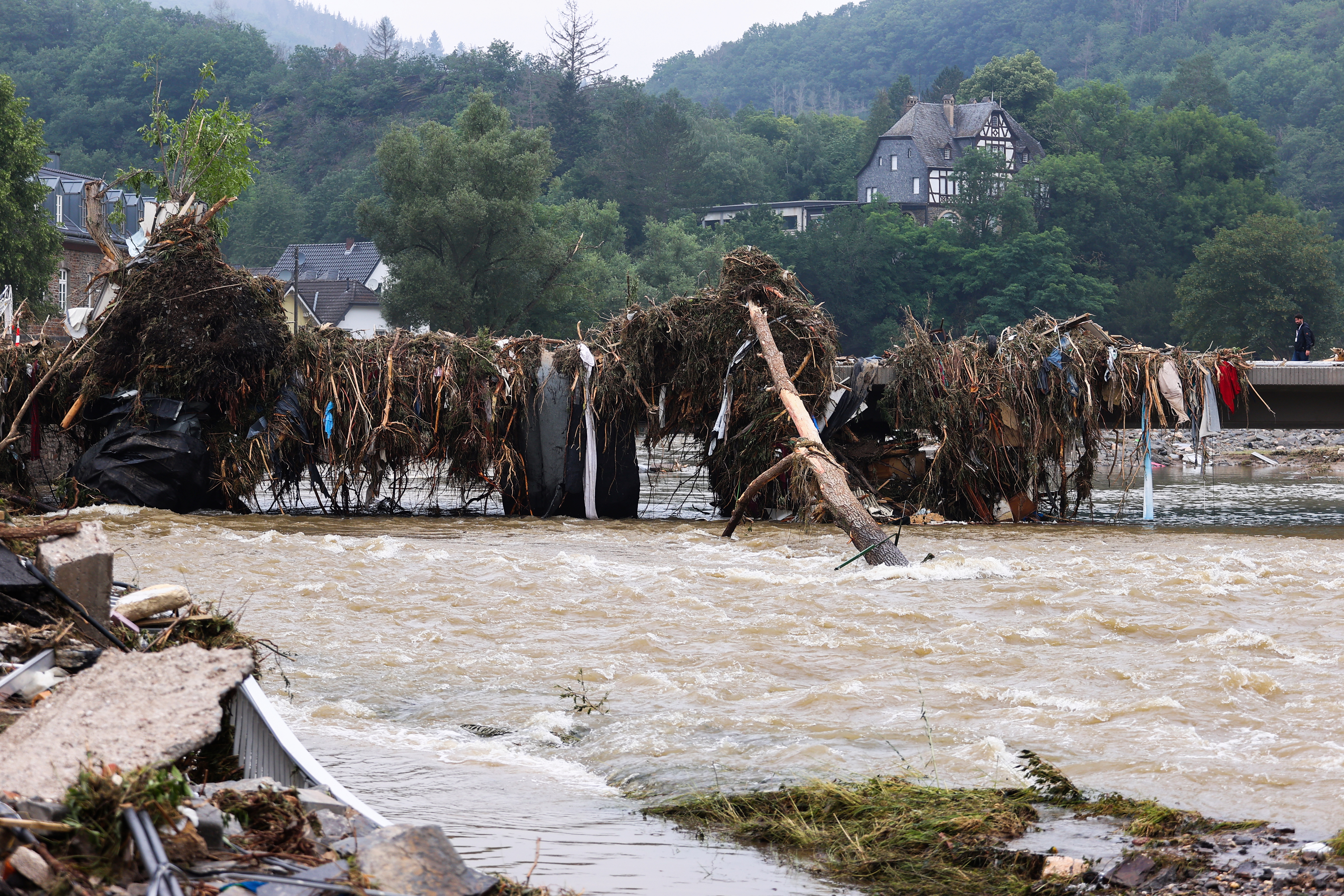 At least 168 people have been declared dead so far across Germany and BelgiumCredit: Reuters 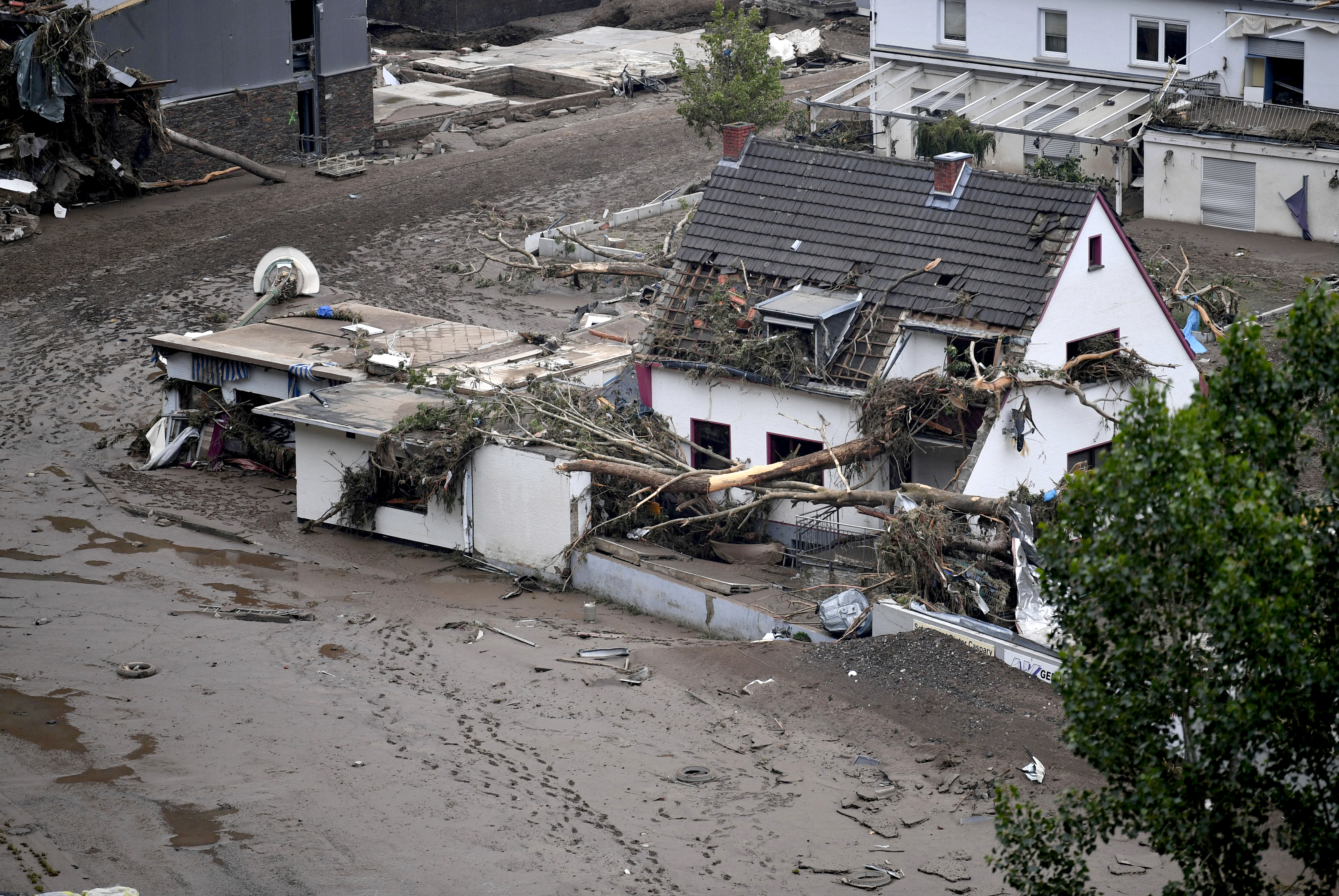 Now there are fears the unfolding disaster could get even worse – with thousands of people already left homeless.

This has threatened to raise the mighty Rhine river to dangerous levels.

About 1,300 people were missing in the Ahrweiler district south of Cologne, the district government said.

In the village of Schuld, Hans-Dieter Vrancken, 65, said: “Caravans, cars were washed away, trees were uprooted, houses were knocked down.

“We have lived here in Schuld for over 20 years and we have never experienced anything like it. It’s like a war zone.”

Mobile phone networks have collapsed in some of the flood-stricken regions, which means that family and friends were unable to track down their loved ones.

Police have asked people to share footage and pictures of the floods to help them locate the missing as hundreds of soldiers were deployed to aid authorities. 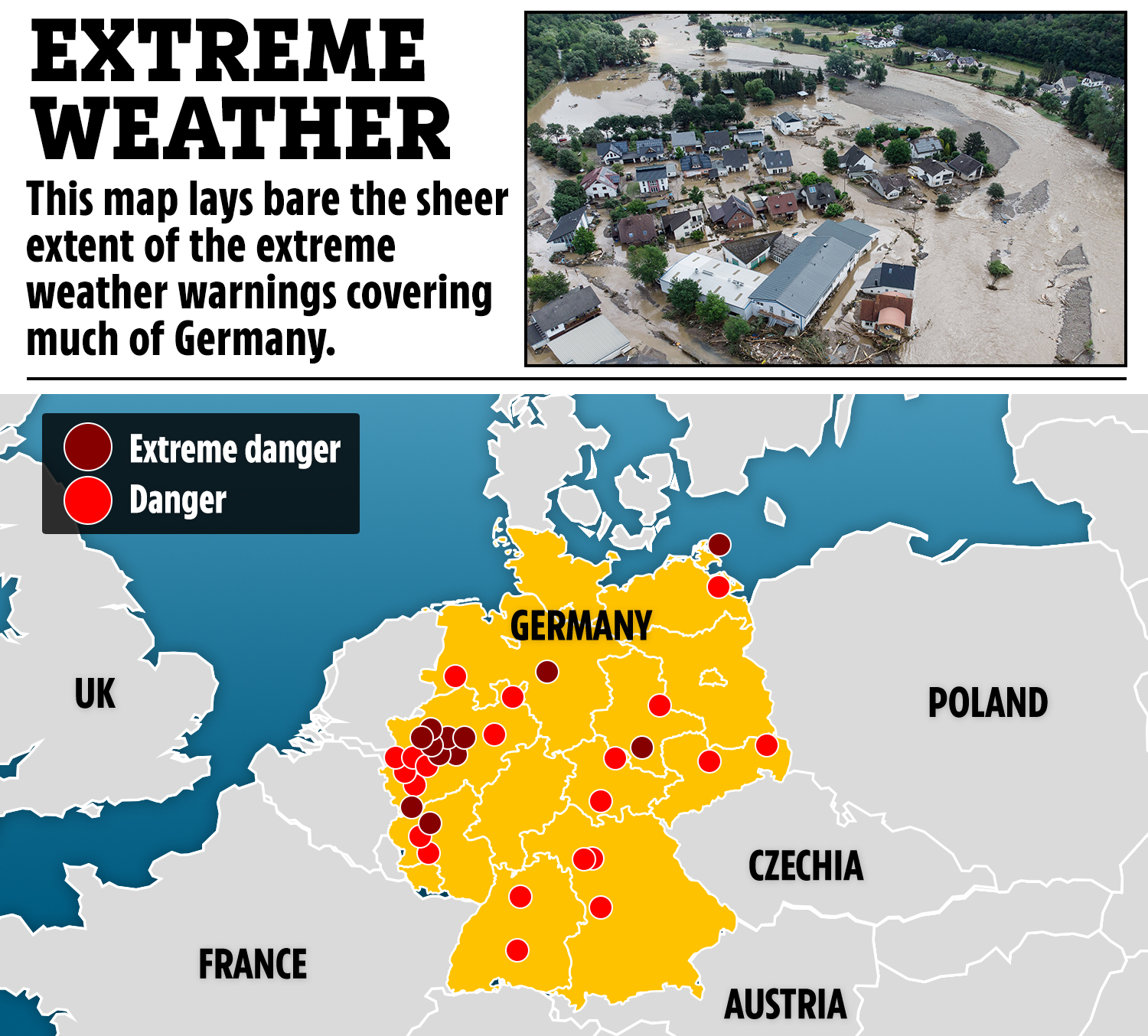 Regional interior minister Roger Lewentz told broadcaster SWR: “When you haven’t heard for people for such a long time … you have to fear the worst.”

“The number of victims will likely keep rising in the coming days.”

Chancellor Merkel dubbed the dire weather “a catastrophe” ahead of a meeting in Washington with US President Joe Biden.

She told a press conference: “Heavy rainfall and floods are very inadequate words to describe this — it is therefore really a catastrophe.

“I fear that we will only see the full extent of the disaster in the coming days.”

The unprecedented weather has created a perilous situation elsewhere in Western Europe, seeing thousands forced to evacuate as homes collapse and cars are swept away by floodwaters. 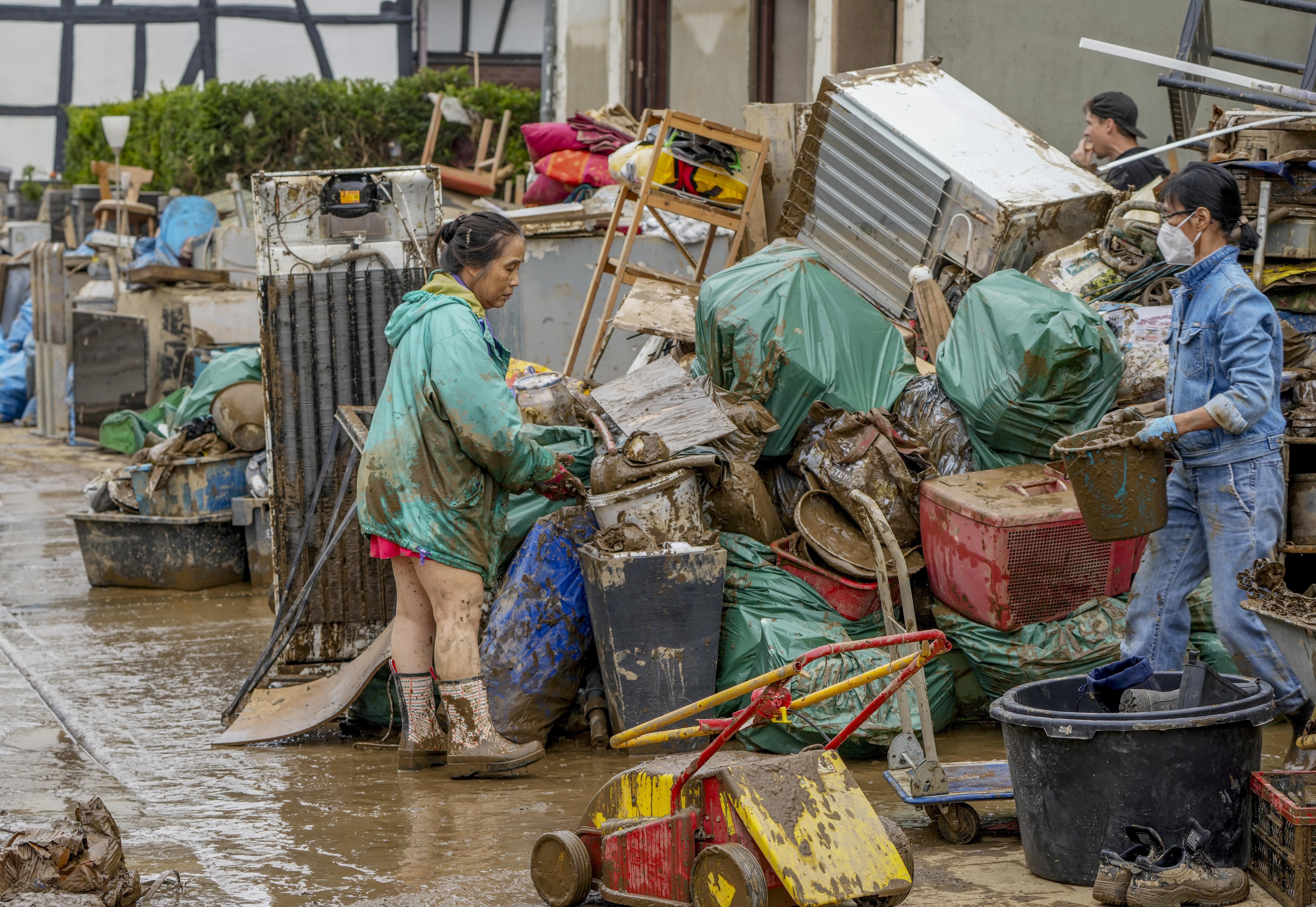 People clean their homes from mud and debris in Bad Neuenahr-Ahrweiler, GermanyCredit: AP 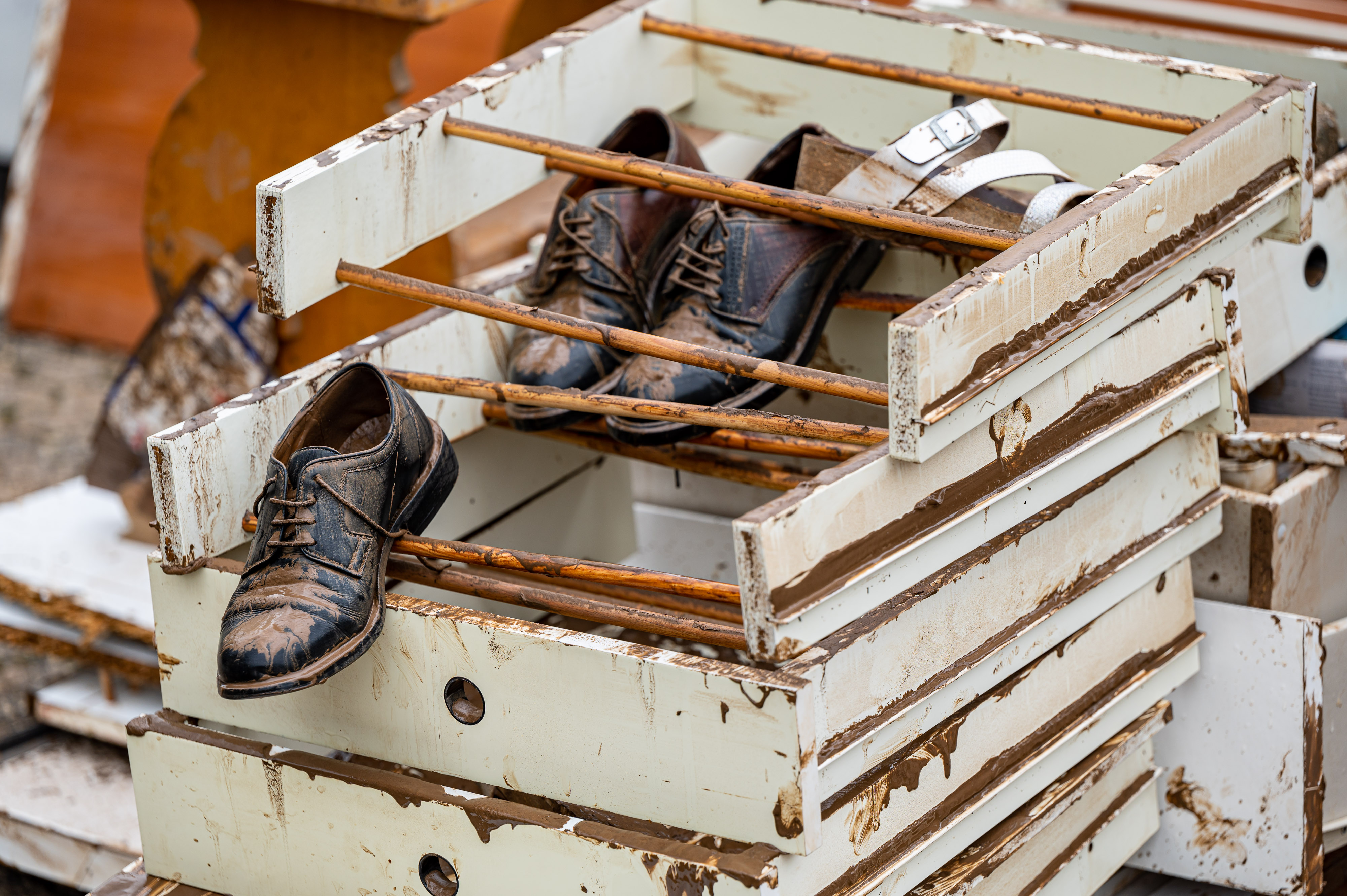 At least 141 people have died in Germany 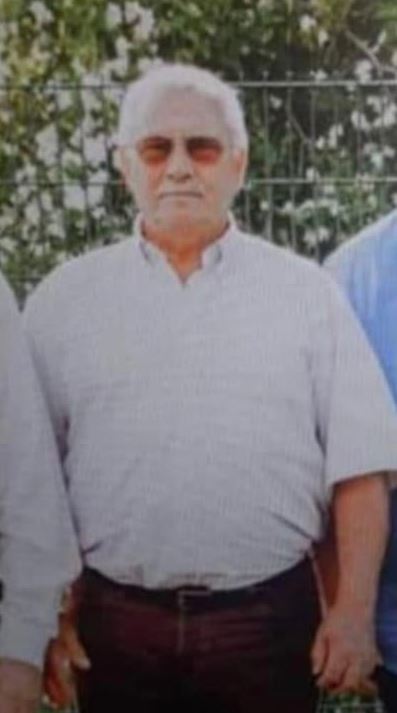 Hans Neufeld, 71, is among the missing 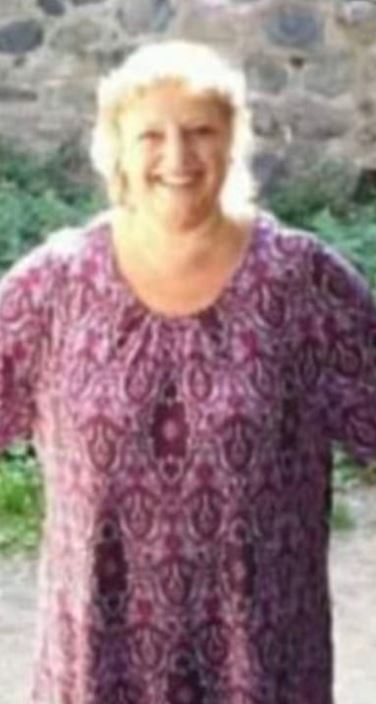 Wife Ella and her family are still missing, in records collected by German newspaper Bild 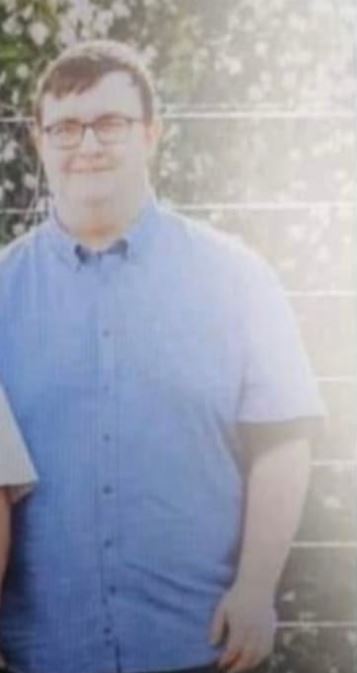 Frank, 22, and his mum and dad are still missing

Thousands of homes have been evacuated in the Netherlands, Luxembourg and Switzerland as raging rivers burst their banks.

France, Italy, and Australia have sent a flood rescue team to help overwhelmed Belgian authorities, as the government of the country’s Wallonia region granted €2.5 billion in emergency aid.

Two German firefighters died during rescue operations in the North Rhine Westphalia towns of Altena and Werdohl, with one drowning and another dying of a heart attack, the Telegraph reports.

In Leverkusen, 468 people were evacuated from a hospital after floods cut off power, according to the Frankfurter Allgemeine Zeitung.

In Erftstadt, southwest of Cologne, 50 people were rescued after the ground beneath their homes collapsed, official Frank Rock told local broadcasters.

Expressing her dismay on Twitter, German Chancellor Angela Merkel said: “I am shocked by the disaster that has affected so many people.

“My condolences go out to the relatives of the dead and missing. I thank the many tireless helpers and emergency services from the bottom of my heart.”

North Rhine Westphalia leader Armin Laschet, who is running to succeed Merkel in September elections, cancelled a party meeting in Bavaria to survey the damage in his state, which is one of Germany’s most populous.

“We will stand by the towns and people who’ve been affected,” Laschet, clad in rubber boots, told reporters in the town of Hagen.

Prince William and Kate also shared a message of support on Friday.

? Read our Germany floods blog for the very latest updates

“The damage and loss caused by the flooding disaster in Germany, Belgium, Luxembourg and the Netherlands is devastating. We are thinking of all those affected by these floods,” they said in a statement.

Large chunks of Rhineland-Palatinate and North Rhine Westphalia are under water while villages in Belgium‘s Liege and Wallonia provinces were being evacuated due to rising river levels.

Belgium news outlet VRT NWS quoted the mayor of Pepinster, a small town of around 10,000 people in the Liege province, who said dozens of houses collapsed along the Vesdre River that flows through the area.

In the town of Chaudfontaine, daily Le Soir reported that nearly 1,800 people had to evacuate while 250 people in Moelingen were forced to leave their homes overnight.

One woman told Belgian TV station VTM News: “The emergency services advised us not to wait until tomorrow morning and to get out immediately.

“The house is completely full of water.” 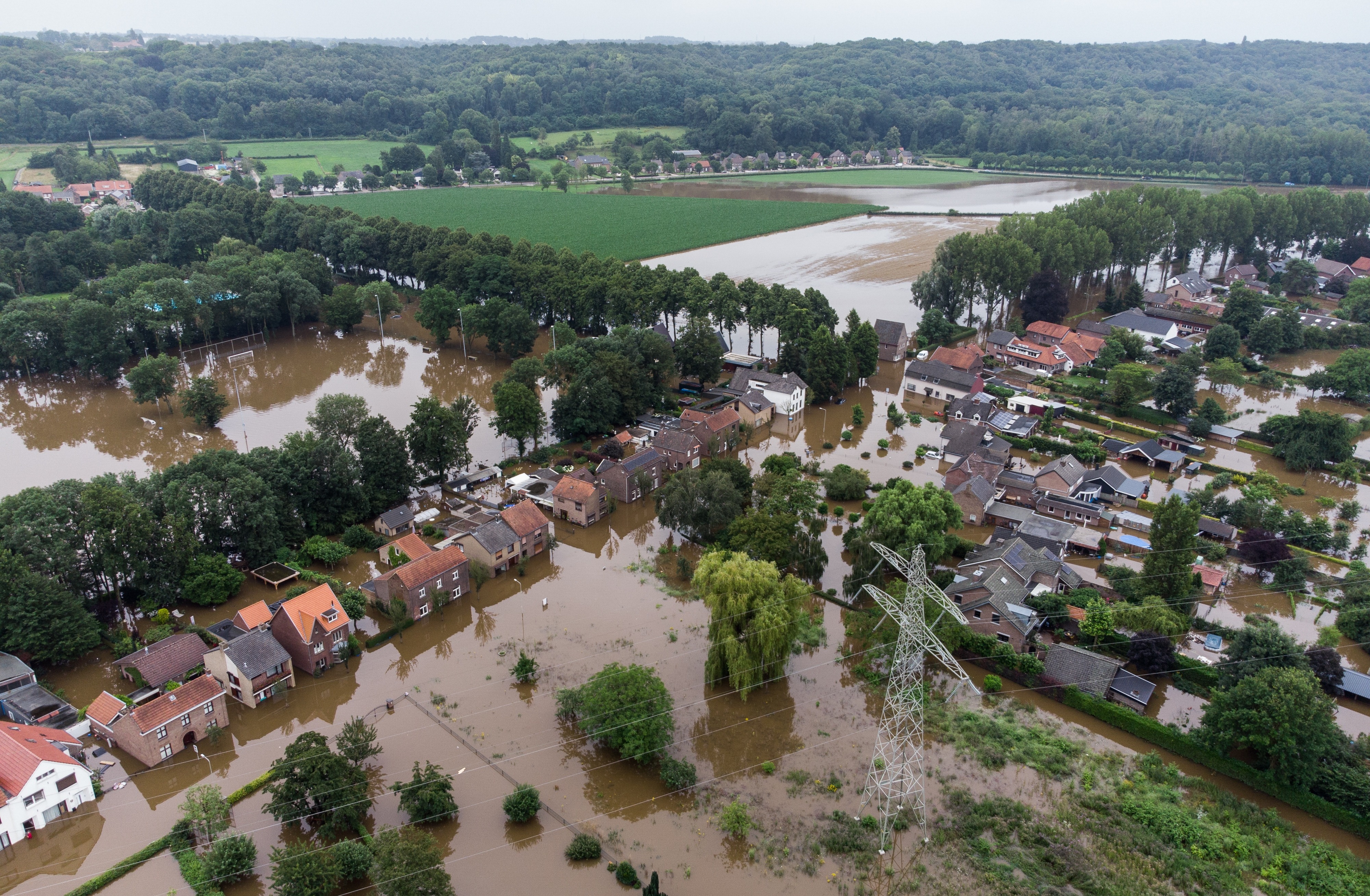 Thousands of people are still missing after the intense delugeCredit: Getty Images – Getty 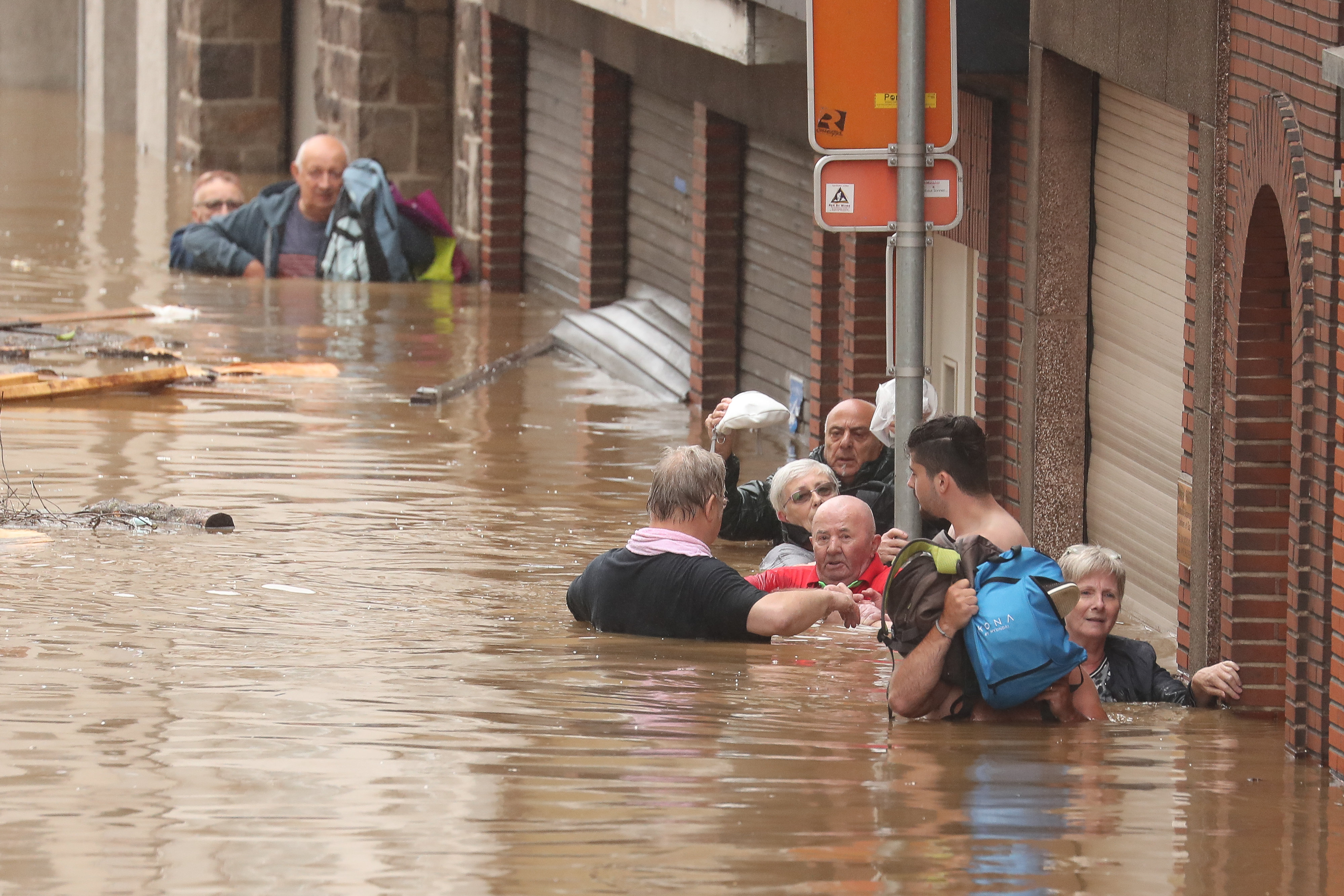 Residents being saved in Liege, Belgium 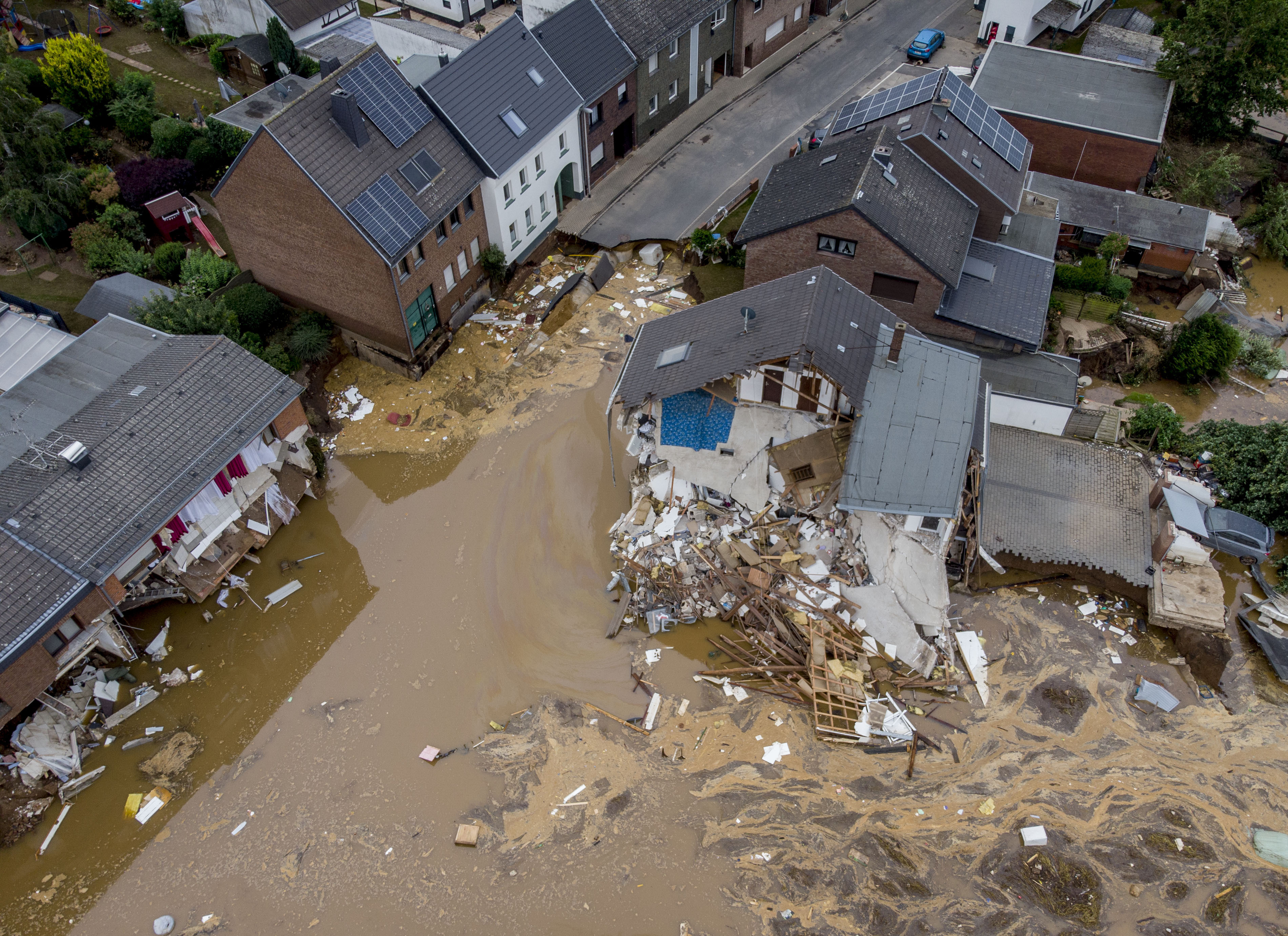 A road is covered with mud in AltenahrCredit: AP