AN event organiser who tried to plan a girly weekend away with her mates was left fuming when she was reportedly told by a hotel manager that she and her plus-size pals weren’t the “clientele they want to attract”.

Activist Miranda Kane had reportedly emailed Marks Tey hotel in Colchester earlier this week – which is part of the Best Western hotel chain – to ask if they could host “a weekend for plus size party animals” – but she was left shocked by the response she got.

Miranda Kane regularly hosts events for her pals but was left shocked by the hotel’s response to her emailCredit: Kennedy News 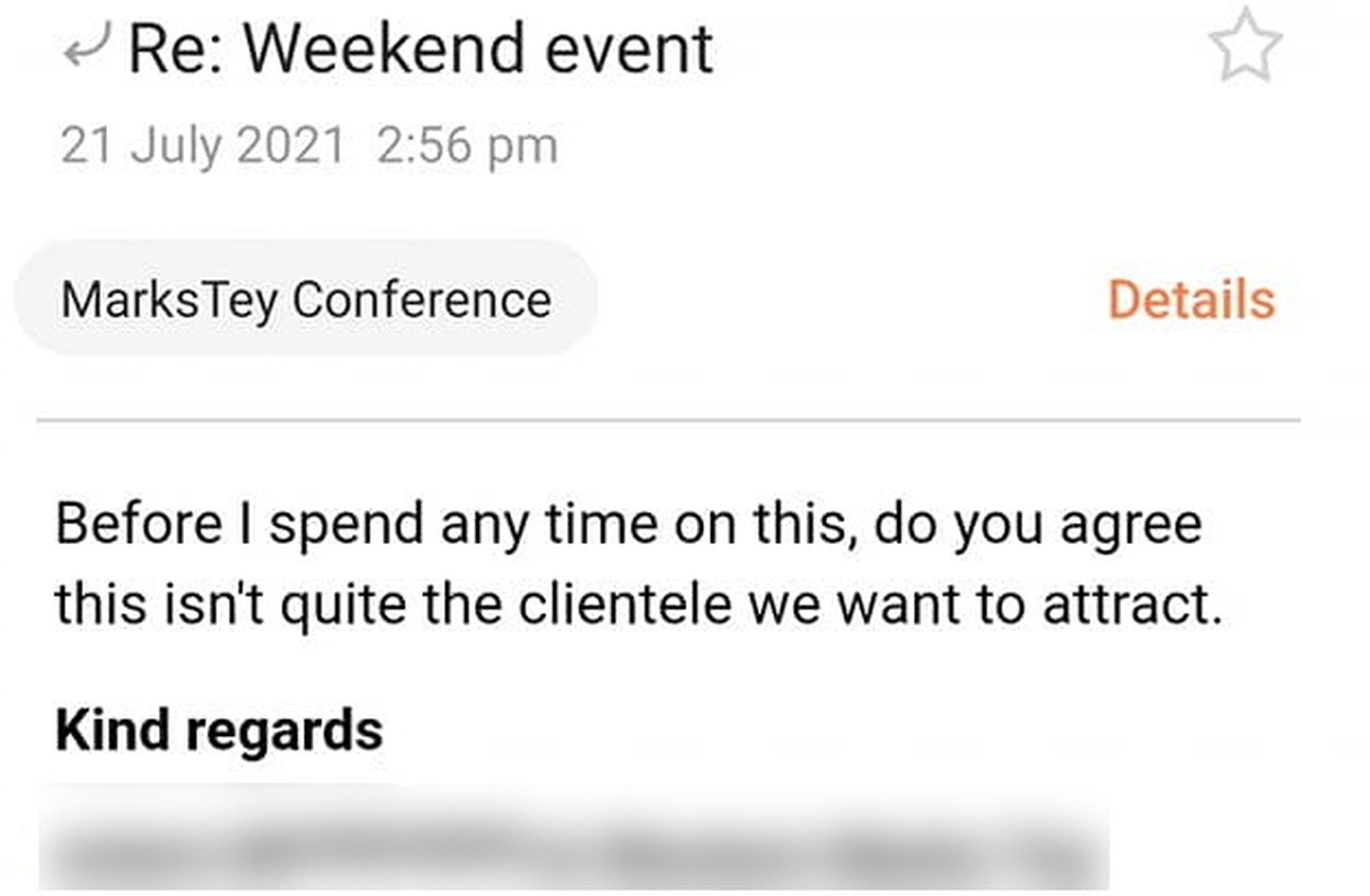 The hotel manager had intended to email another member of staff but the email was sent to Miranda by accidentCredit: Kennedy News

The manger responding to the email had supposedly intended to reply internally to another member of staff but instead replied directly to Miranda by accident.

The email read: “Before I spend any time on this, do you agree this isn’t quite the clientele we want to attract”.

Miranda, who runs ‘body positive’ events company Club Indulge, claimed that her “heart stopped” after reading the reply and slammed them for being “fat-phobic.”

Miranda claimed she “could have cried” as she questioned why plus size people were unwanted guests – when the “sedate'”group only hoped to have dinner, karaoke, and a jumble sale or bingo

Best Western have reportedly apologised for the blunder, claiming they are “hugely embarrassed”, but insist the general manager’s objection was due to the term “party animals” and not their group’s bodies.

It’s fatphobia. I’ve been using the tag line ‘plus size party animals’ since day one and we’ve never had a problem with it.

“It’s fatphobia. I’ve been using the tag line ‘plus size party animals’ since day one and we’ve never had a problem with it.

“Their tagline is ‘Hotels with Personality’. Oh, great. I can see exactly what your personality is mate.

“When that email landed, my heart stopped. I could not believe that someone in this day and age could send an email like that.

“I could have cried. It’s everything I’ve been working on for eight years. You come up against this and it just knocked me for six.

“They’re trying to say it’s the ‘party animals’ bit, but they host events, parties and weddings themselves. We’ve all seen what happens at the end of a wedding. They don’t end up with everyone in bed by 6pm with a Horlicks.

“They can’t bet who comes to a wedding. They can’t say to the bride and groom ‘oh, you can’t have your mad uncle George or your gropey brother along’.

“I’ve met my customers; I can see who’s coming to these weekends. It’s such a conceited attitude.”

Miranda, who has been hosting events around the UK since 2013, claims she has never received such an offensive response before.

“I could have cried. It’s everything I’ve been working on for eight years. You come up against this and it just knocked me for six.

In her introductory email, she explains the party weekend would be for ages ranging between 25 and 45 years old.

She claimed the “sedate” group would have dinner and a karaoke, a smaller event such as a jumble sale or bingo the following day, before a pool party and Sunday lunch.

Miranda, also a comedian and writer, said: “I’ve had venues from London, used hotels in Bournemouth and Bradford. When I contact people, I’ve never ever had a response like that in eight years.

“What is it about our clientele that do not meet their exacting standard?

“On the itinerary it’s things like we’d love to have two hours to ourselves in the pool because we’re plus size people. To us, going into a swimming pool without feeling like we’re being judged is a luxury.

“The itinerary is just things like bingo, a pub quiz. We have dinner and disco in the evenings but it’s nothing mad.

“You can clearly see it’s not a mad, raving party. It’s just people who are trying to have a safe space to feel like they’re not being judged and to have a chat with their mates.

“They could have seen we’re quite a sedate bunch who want a chat.

“It was a professional email. I wrote that email to a good standard to show I was a professional, I showed them my business. I wasn’t a chancer gong ‘oi, oi, me and my mates want to come down for a stag do. What’s the best you can do?’

“If you don’t want someone to have a night out in your hotel, don’t have a bar. Don’t have a hotel. Don’t host weddings.

“They are only different between their parties and mine is that mine have plus size people in it.”

The writer has now slammed the hotel’s manager for his “really pathetic” response, vowing to take her £20,000 worth of business elsewhere.

The manager sent a tweet and a really pathetic trying to say it was because of the ‘party animal’ bit, but again, they host their own parties and weddings.

Miranda said: “The manager sent a tweet and a really pathetic trying to say it was because of the ‘party animal’ bit, but again, they host their own parties and weddings.

“It’s just a fun introduction to say who we are. I then say it’s a body positive event.

“I’ve sent that email to dozens of hotels this week and not one of them have sent anything near that.

“If there’s anyone out there that wants to host us, that wants £20,000 worth of business right after a pandemic, we’d love to hear from them.

“We spend all our time in the hotel. All we want to do is spend our money on drinks in the bar and room service.

“We’re all just mates, no one causes a fight, we haven’t seen each other. It’s not like one half of the family’s having a fight with the other half like at weddings.

“It’s really hard because we’ve worked with Best Western before. Our last event in Bournemouth was really great.

“It’s been a real shock for a hotel of the same family to act like this. It’s something within Best Western that they should look at.”

After posting on social media, Miranda received messages of support from others claiming the comments were ‘disgusting’ and ‘blatant’.

One person said: “Oh my god! So, are fat people just not the types of people they want staying at their hotel? I’m absolutely shot to pieces to read this so blatant. Usually it’s said more subtly.”

While a third said: “As a plus size person who has stayed at many Best Western hotels over the years, I’d love to know when I became to type of clientele you didn’t want?”

Oh my god! So, are fat people just not the types of people they want staying at their hotel? I’m absolutely shot to pieces to read this so blatant. Usually it’s said more subtly.

But others questioned whether it was the line claiming they ‘party animals’ that might have spooked the manager.

One stated said: “I think it was the self-labelled ‘party animals’ that they were probably wishing to avoid.”

Another agreed: “Party animals makes the clients sound like a stag/hen do.

“Many companies have policies against this because they have to consider the other guests staying in the hotel e.g. families, women staying by themselves, who may feel threatened by ‘party animals’. This is not fatphobia. Get a grip.”

A third person said: “Yeah if I owned a hotel I wouldn’t want to accommodate you either. Lost me at party animals.”

And a fourth added: “As a fattie myself, I’d have rejected a booking of ‘party animals’. Just accept it and move on instead of banging a drum for no reason whatsoever.”

“The General Manager from the Marks Tey hotel has responded directly to the original tweet from Miranda [Kane], and have expressed that they are hugely embarrassed and apologetic but insist that their response was in reply to the ‘party animal’ comments and nothing to do with body type.” 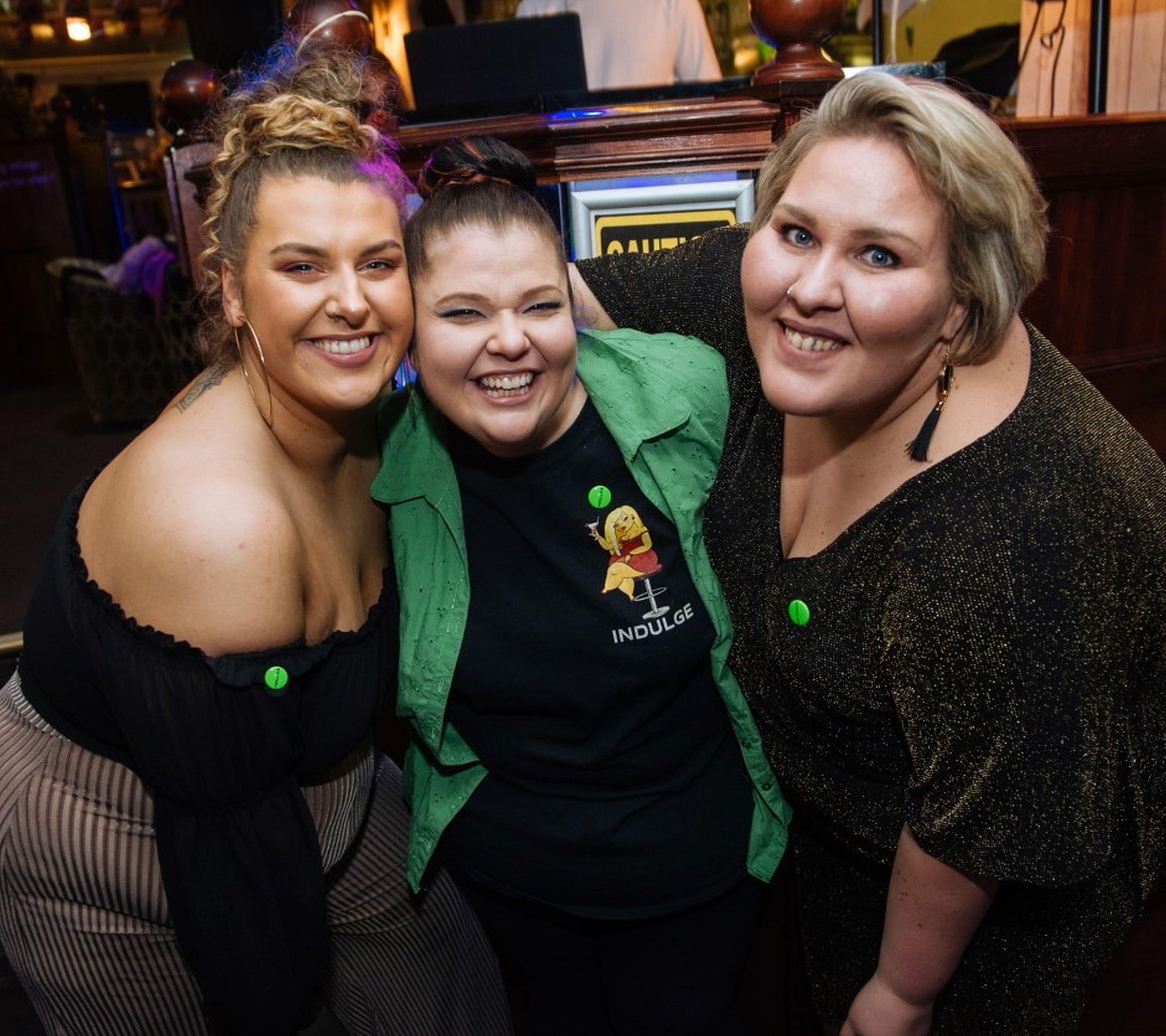 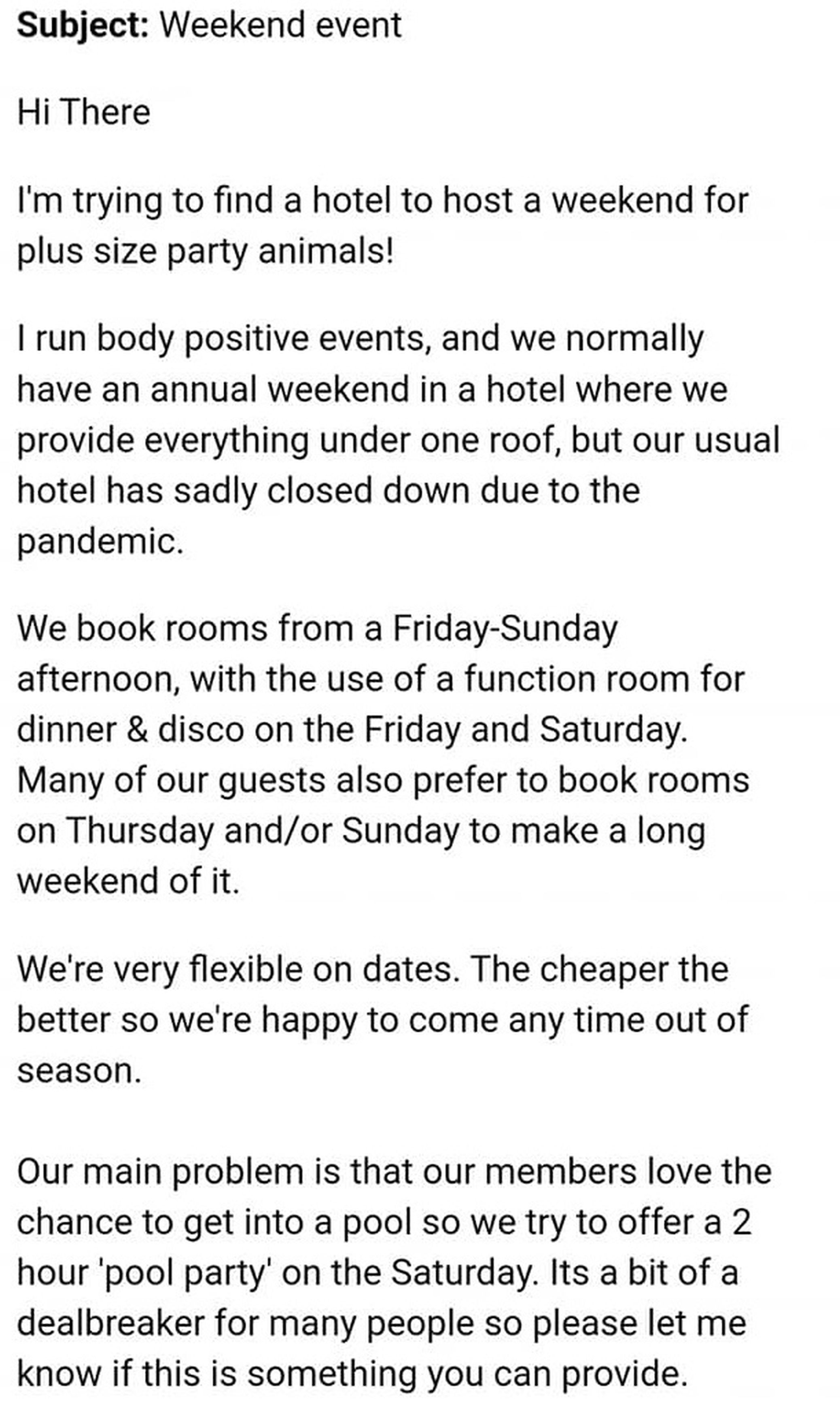 She tried contacting the Marks Tey hotel in Colchester to book in an eventCredit: Kennedy News 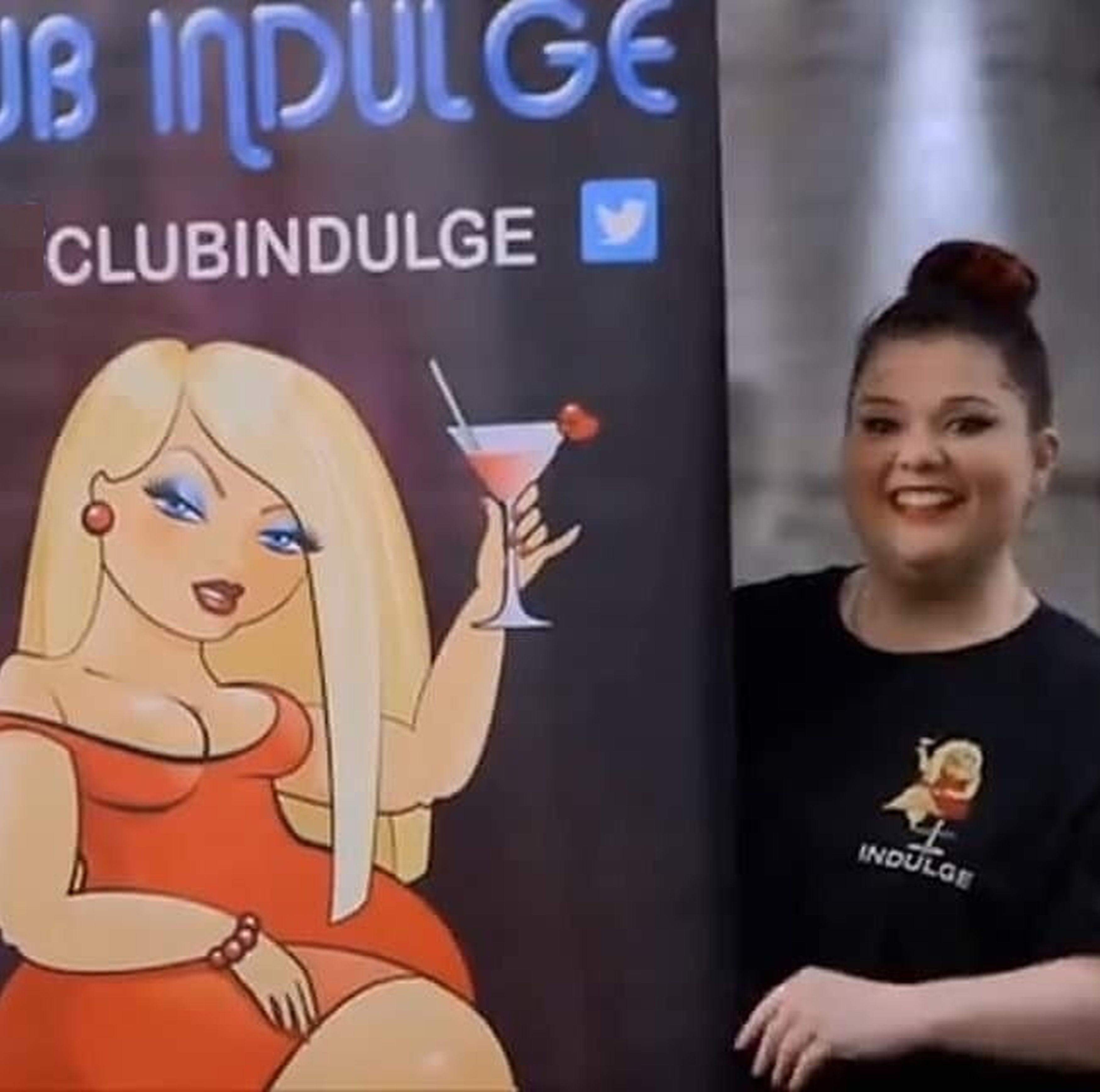 Miranda said she’s booked in at hotels all over the UK and has never had a problemCredit: Kennedy News

Meanwhile, this woman says ‘I’m fat and travelling is a nightmare – toilets are always cramped and ‘fatphobic’ hotel towels are too small.’

Plus this woman posted a snap of herself in a bikini – trolls called her a ‘fat b****’ & told her to ‘eat carrots’, even a doctor piped in.

And a woman owns a £500k house at 24 after selling sexy snaps online.