The last time I met Kristen Stewart, she was in Venice promoting her fantastic performance as actress Jean Seberg.

With her arms clad in tattoos, a Jillian Dempsey ‘Punk Lock’ chain around her neck and Christian Louboutin brogues, the one-time Twilight star looked wonderfully too-cool-for-school.

A year on, I was hoping for something a little more ‘home for the holidays’ – a Christmas jumper, perhaps? After all, she’s jumped on Zoom to promote her new movie, Happiest Season. Sadly, the camera is off – so I can’t even tell if she’s got a sprig of holly in her hair.

Living in Los Angeles, chances of a white Christmas are zero, her attitude to the festive season is what you might expect from someone as unconventional as she.

‘My family is just exceptionally non-traditional but that doesn’t mean we don’t have our traditions,’ she says. ‘There’s never been this level of pressure on Christmas. My whole family are people that are non-participators. It’s chilled. I love Christmas but I can’t really tell you why.’

Now the 30-year-old star is looking to shake up everyone up with Happiest Season, the first mainstream studio Christmas movie to feature a gay couple at the centre. 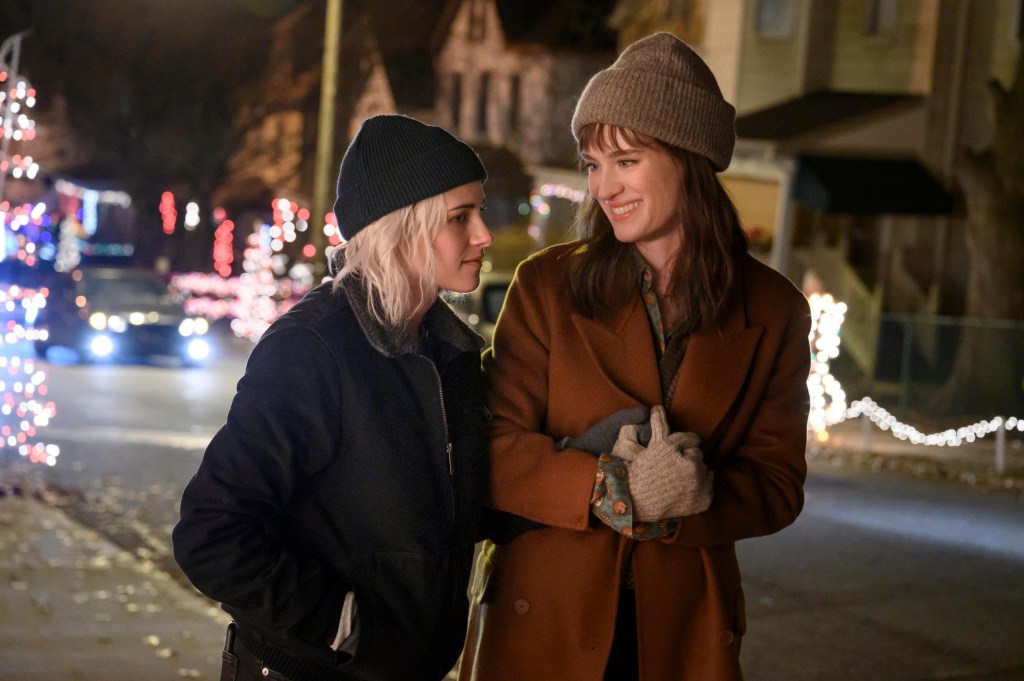 The film is making history as Hollywood’s first Christmas film about a lesbian couple (Picture: AP)

She plays Abby, who gets the shock of her life when girlfriend Harper (Mackenzie Davis) reveals she hasn’t come out to her conservative parents – just as they’re about to both spend five days over Christmas there. And so Abby has to play pretend as the roommate, a wheeze that is destined to backfire like a cheap cracker.

As someone who came out as bisexual a few years ago, even going on Saturday Night Live as guest host and declaring ‘I’m so gay’, Stewart was desperate to make Happiest Season.

‘I would have felt totally jealous if I wasn’t cast in this movie,’ she says. ‘When I read the script and I knew that it was attached to a studio, that it had a big budget behind it and that it was brilliantly accessible, cute and funny, and wasn’t overwrought, I was so relieved.’

The film is by actress-turned-director Clea DuVall, who came out publicly a few years before Stewart.

‘That Clea is the one telling the story, it makes it feel right,’ she reveals. ‘If it was coming from a different perspective, it would be opportunistic, token and weird.’

After working with Elizabeth Banks (Charlie’s Angels) and Kelly Reichardt (Certain Women), Stewart is just as keen to promote women in film as she is to talk LGBTQ+ representation.

‘It’s not easy for women to make movies,’ she says. ‘Not to generalise but men just think they know everything!’

Raised in Los Angeles – her Australian mother Jules worked as a script supervisor, her American father John is a TV producer – Stewart is reluctant to say if she’s ever been through anything like Abby or Harper.

‘I’ve luckily not had specific experience with my family, per se, that I want to get into,’ she adds. Much harder perhaps was dealing with the Twilight hysteria. ‘I was 18 years old,’ she shrugs. ‘There’s no reference for that.’

A dozen years on, Stewart is still finding fresh avenues to explore. As she’s not known for comedy – or even smiling on red carpets – playing in a family farce like Happiest Season was uncharted territory.

‘It was new for me, for sure,’ she says. ‘I hadn’t worked in a while when we started this so I was kind of ready for anything. As soon as we started I realised that everything became funnier the more relaxed it got and the more committed everyone was. So any kind of pressure or intimidation that I brought into it in the beginning was pretty quickly washed away.’

Ready for anything? She’ll need to be for her next intended role – Princess Diana in the film Spencer.

‘It’s hard not to feel protective of her – she was so young,’ says Stewart, who reveals the film will take place over three days, reputedly when Diana resolves to leave Prince Charles. Shaking up Christmas? That’ll be nothing compared to sending a broadside to Buckingham Palace.

Who else is in the Happiest Season?

The Schitt’s Creek star is Abby’s best friend and shoulder to cry on when things take a turn for the worst with the Caldwells. He’s level-headed and reasonable.

Abby’s girlfriend, who asks her to hide their relationship from her parents over Christmas. Can she finally embrace her sexuality?

Harper’s competitive sister is hiding a secret of her own from the family that could shatter the perfect image she’s cultivated.

The Caldwell patriarch is running for mayor of his conservative small town and is the reason Harper is hiding her sexuality.

A perfectionist who expects the very best from her family and proves the hardest for Harper to win over.

Happiest Season is available on demand to buy and rent.