The couple both star alongside each other in crime thriller Midnight In The Switchgrass, with Megan, 35, playing the role of Rebecca Lombardi, an FBI agent working with her partner Karl Hetler (Bruce Willis) to bust a sex trafficking ring.

One scene shows Rebecca go undercover to act as ‘bait’ for a pimp, played by MGK, 31.

And after first meeting on set for the movie, MGK, real name Colson Baker, and Megan, quickly began dating – not long after the actress split from ex-husband Brian Austin Green.

However, it seems MGK reckons the flick actually isn’t all that good, which has baffled many of his fans.

Taking to Twitter, the rapper tweeted: ‘If I don’t talk or tweet about a movie I’m barely in it’s because it’s [trash emoji].’

His followers were quick to respond, with one asking: ‘Lmao then why did you even take the role in the first place.’

Another added: ‘Well then don’t do it idk what to tell you.’

And another fan also echoed the same thoughts, as they wrote: ‘LMAO THEN WHY R U IN IT.’

It comes after both MGK and Megan appeared to diss the film on an Instagram Live earlier in the month.

Discussing his acting chops, MGK said: ‘I would never act in something I don’t believe in… Ha, except…’

MGK and Megan first met on the set of Midnight In The Switchgrass, and began dating shortly after (Picture: Lionsgate)

He then started laughing and pointing at Megan, who was off screen and was heard saying: ‘Don’t do that yet.’

The couple later dropped out of the film’s official premiere at the Regal LA Live, citing concerns about the rise of Covid-19 cases in Los Angeles.

A rep for Megan said: ‘Due to the recent California mask mandate and rise of COVID cases, Megan Fox will no longer be attending the premiere tonight. We appreciate your understanding.’ 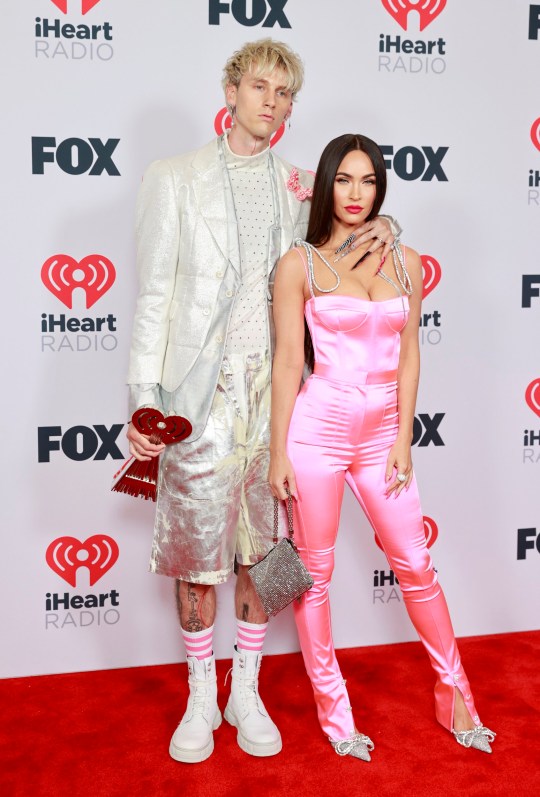 However, it appears Lala Kent, the fiancé of Midnight In The Switchgrass director Randall Emmett, was not impressed with Megan, MGK or co-star Bruce Willis, who also skipped the premiere.

On her Instagram Stories, Lala posted congratulatory posts for her partner and all of the cast members, including Emile Hirsch, but excluding those who did not attend the premiere.

The Vanderpump Rules star also posted a very pointed snap, in which she stood in front of Megan on the movie poster, and shared the caption ‘So excited for this’ over the actress’s name. 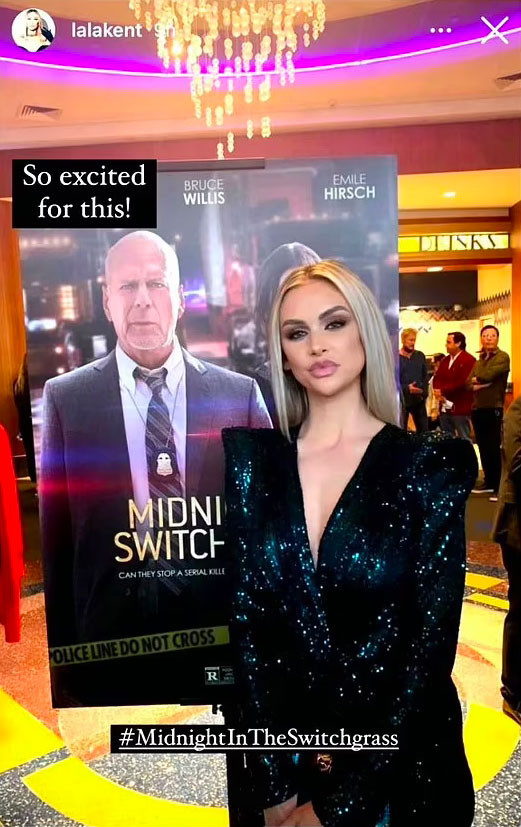 Lala appeared to shade Megan when she did not attend the film’s premiere (Picture: Instagram)

Randall Emmett, however, did thank all of the cast in his Instagram post celebrating the premiere, tagging Megan and Machine Gun Kelly alongside the rest of the cast who attended the screening.

While missing the premiere was down to Covid restrictions, Megan and Machine Gun Kelly have done very little to promote the movie, and have not shared any promo material on social media.

Some fans have also been questioning why MGK and Megan had not promoted Midnight In The Switchgrass, but had instead brought attention to the Transformers star’s upcoming horror film, Til Death, instead.

Midnight In The Switchgrass is based on the true story of the Truck Stop Killer, real name Robert Rhoades, who is serving a life sentence without parole after being convicted of three murders.

Rhoades is suspected of torturing, raping and killing more than 50 women between 1975 and 1990.

Emile Hirsch, Lukas Haas and Sistine Stallone are some of the other stars of the film.

Midnight In The Switchgrass is now out in cinemas.