Want to know what Margot Robbie’s Barbie will sound like? (Picture: Dsanchez/CPR / BACKGRID)

We’ve seen what Margot Robbie’s Barbie looks like and now we’ve got an ever-so-brilliant snippet of what she’ll sound like, too.

A leaked clip snapped by a dedicated fan following all the mayhem on the Venice Beach set captured actress Margot rollerblading along with America Ferrera, in quite the get-up, as they trailed a camera crew.

Giving us a glimpse into the Greta Gerwig-directed movie, Margot’s voice is evidently both exactly what we’ve been expecting Barbie to sound like, while also being an absolute iconic voice.

It’s a wild mix of exuberance, enthusiasm and perk and just what the doctor of this wild world we’re finding ourselves in with this set ordered.

In the video uploaded by a fan account to Twitter, Margot is heard saying: ‘Ready for fun?’

America – who wasn’t dressed in the neon brights we’ve witnessed from Margot and Ken’s Ryan Gosling – replied: ‘Yeah,’ before Margot squeals: ‘Yay’, and the pair skated off along the beachside boardwalk.

We don’t know whether it’s the outfit, the voice or just the general vibe, but we are all kinds of amped for this film, even though we have no flippin’ idea what it’s all about. Apart from, you know, being about Barbie.

We’ve been spoiled with a range of psychedelic costumes that look more at home in a Jane Fonda aerobics studio than anywhere else, but it’s only gone a long way to piquing our interest even more so. 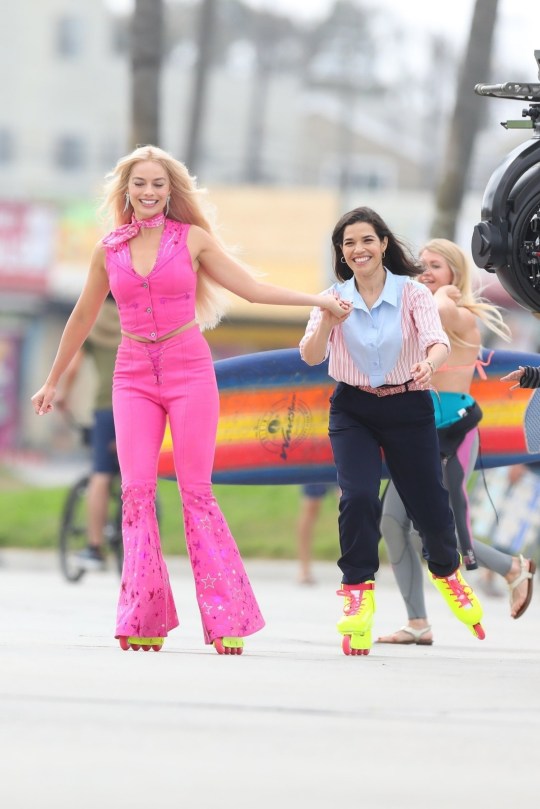 Margot was skating with fellow star America in the scene (Picture: Dsanchez/CPR / BACKGRID) 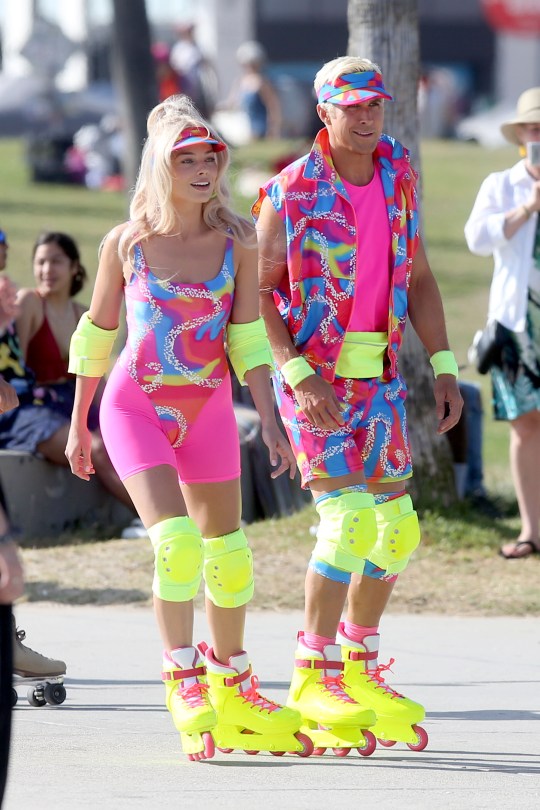 We have been given a treat with Margot and Ryan’s outfits (Picture: SplashNews.com) 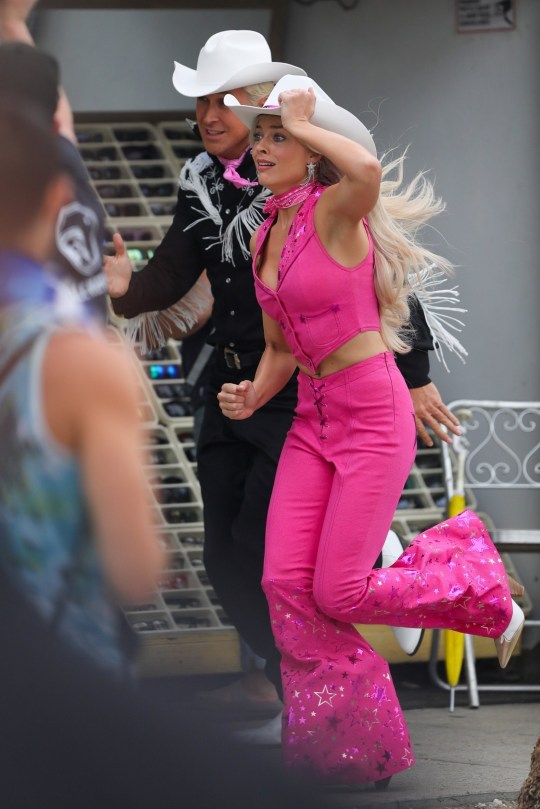 And would you get a load of the drama (Picture: CPR/D.SANCHEZ / BACKGRID)

Production on the anticipated Warner Bros flick has been in full swing recently, with Margot, 31, and Ryan, 41, fully transforming into Barbie and Ken and living in their very pink world.

And while we’re yet to hear what Ken sounds like, fans are absolutely living for every frame of the action, which has so far seen Wolf of Wall Street actress Margot taking her bubblegum pink Barbie car out for a spin outside her equally bubblegum pink house, and The Notebook actor Ryan debuting his platinum blonde hair as Ken. 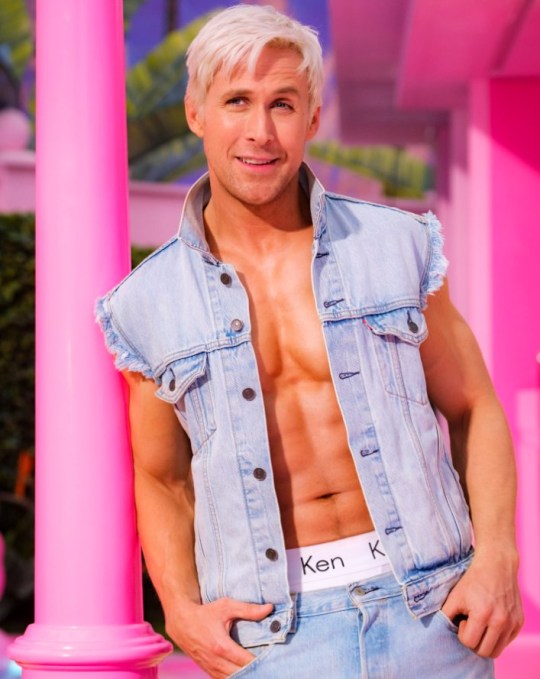 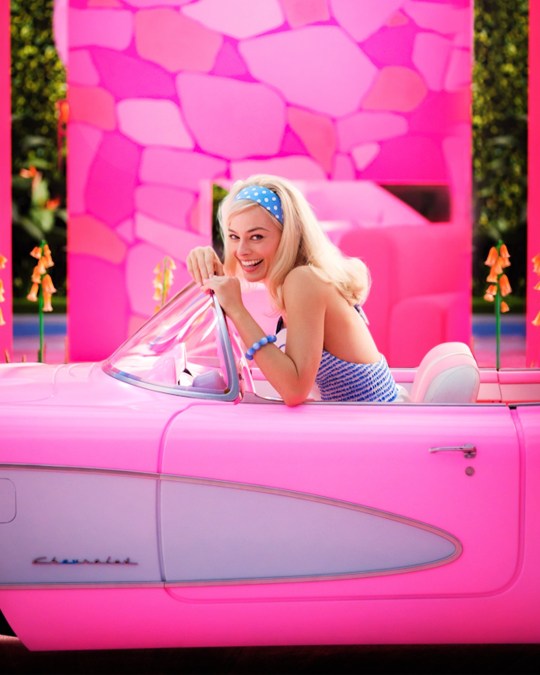 Get ready for a whole load of pink (Picture: Warner Bros)

The Hollywood stars were spotted filming intense scenes elsewhere in Venice this week, looking frantic as they made a mad dash through the streets together with Margot clad in a pink cowgirl outfit featuring flared trousers with a bandana tied around her neck, while Ryan donned a black western-inspired outfit complete with tassels across his shirt.

After recovering from the drama, the two were seen chatting and sharing laughs in between scenes.

The film will also see Will Ferrell and Doctor Who’s Ncuti Gatwa star alongside the two leads making for a particularly A-list cast. Gerwig will direct the live-action rom-com which is based on the iconic Mattel doll. 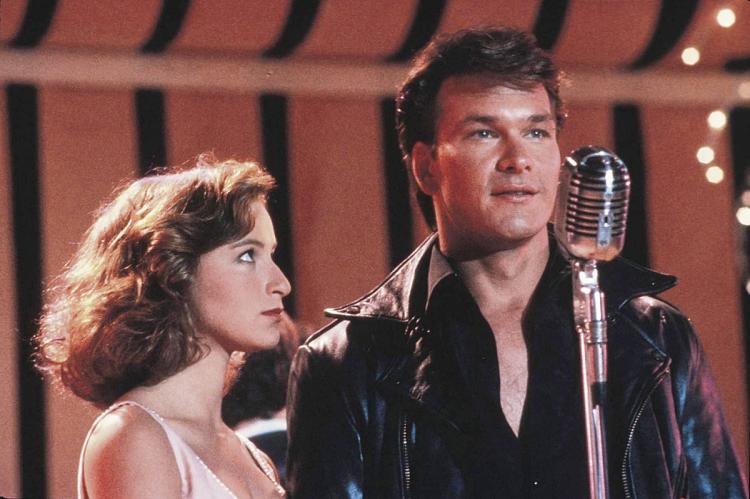 FROM "I carried a watermelon" to "No one puts Baby in the corner," Dirty Dancing has become one of the...