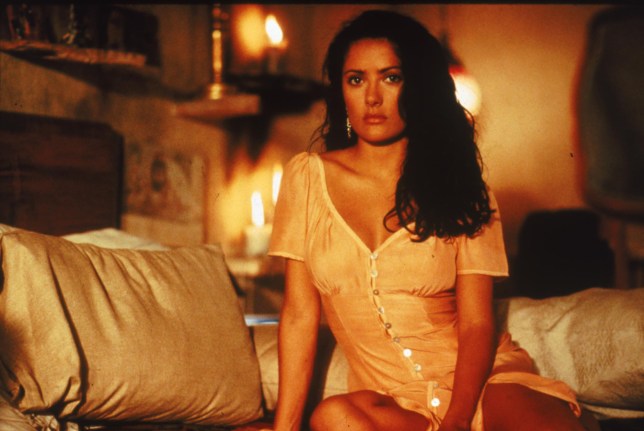 Salma Hayek has revealed she had a ‘hard time’ that filming the sex scene in her breakout Hollywood film, Desperado, because she couldn’t stop ‘crying.’

The Mexican-American actress made her mark in the industry thanks to her part alongside Antonio Banderas in the 90s flick, however, one of the most iconic scenes was a real struggle for the actress to film.

Opening up about the project in Dax Shepard’s Armchair Expert podcast, the 54-year-old star explained the scene had been added into the flick after she’d agreed to play Carolina.

The star explained: ‘Oh God, I’m gonna be in trouble – but the love scene was not in the script. It was demanded by the studio when they saw the chemistry test.

‘I had a really, really hard time with that… I don’t enjoy the scene.’

The Frida actress explained how she was lucky enough to film on a closed set with the help of director Robert Rodriguez and his then-wife Elizabeth Avellán (who was a producer for the movie). 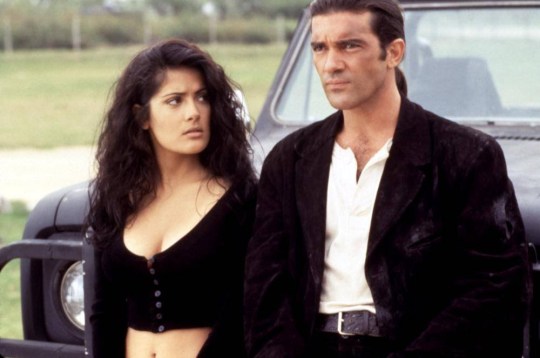 The actress starred alongside Antonio Banderas in the hit flick (Picture: Columbia Pictures)

Salma recalled: ‘The wife of Robert Rodriguez at the time became my best friend and she was the producer. Robert, thank God, can do everything on a film set. He can do the sound, operate the camera and he was like my bro so they closed the set.

‘It was Robert, Elizabeth, Antonio and I so that was nice, except that I had never done anything like that so when we were going to start shooting, I started to sob’.

She continued: ‘I kept saying, “I don’t know that I can do it.” One of the reasons I was afraid was because Antonio was so free.

‘He was an absolute gentleman and we’re still very close friends but he was very free so it scared me that for him it was like nothing but that scared me because I’ve never been in front of someone like that, in that situation.’ 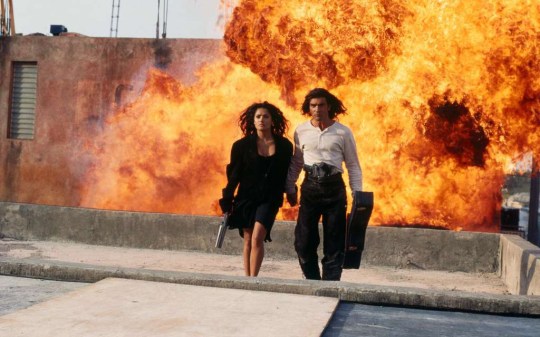 The actress says the studio added in a sex scene due to her chemistry with Antonio (Picture: Columbia Pictures)

The actress added: ‘I started crying and I was so embarrassed that I was crying. They were great but I was not letting go of the towel. They were trying everything to make me laugh and I would take it off for two seconds before I would start crying again. But we got through it.’

Salma praised Robert for being able to adapt how he planned to film the scene due to her obvious discomfort as she explained: ‘They were amazing, we did the best with what we could do at the time. They were so magnificent, these three people.

‘The few moments that I was able to get into the character after Robert would walk me through it… but I couldn’t stay in character. That’s why it was all in little clips. Robert decided he was okay with that because he was an editor also so he was going to do it like that so he wouldn’t put pressure on me.’

Thinking back at her reaction, she explained: ‘I just keep thinking of my father and my brother and thinking, “Are they going to see it? Are they going to get teased? Guys don’t have the father [worry].

‘My father was great, I just said “You can never see it”. We walked out of the theater [in the screening] and when the scene was over, we went back in.’

The actress also recently spoke out about how the studio had originally wanted another Hollywood star in the role – simply because she had a Mexican name.

It turns out Sony-backed Columbia Pictures execs had been eager to sign Cameron Diaz for the part before Salma landed the role.