When it was announced that we would be getting a Space Jam reboot, 25 years after the Michael Jordan classic first hit the big screen, fans were definitely divided on how LeBron James would fare against the iconic Looney Tunes.

And it turns out that the sequel, Space Jam: A New Legacy was not the slam dunk that we had our hopes up for.

Basketball legend LeBron stars as himself in the Warner Brothers flick, which sees him battling to win his gamer son Dom (Cedric Joe) from the evil grips of simulation Al G Rhythm (Don Cheadle), as well as saving the world who will be faced with spending eternity in Tune Town if he loses an all-important game. The only problem are that his teammates are less Dwayne Wade and more cartoon rabbits.

The movie also serves as a whistle-stop tour of everything Warner Brothers has ever released, with a string of cameos from other cartoons, including Rick and Morty, Marvin the Martian, a Superman stunt and appearances from a string of basketball players, giving something for every member of the audience.

But, despite director Malcolm D Lee inserting fun at the heart of the production, and nostalgia by the hoop-full, ultimately it just falls flat.

Al’s motives for trapping everyone in Tune Town felt thin and left us with more questions than answers – mostly, if he’s an all-controlling algorithm, couldn’t he have just found another way to get his big idea on the screen instead of making everyone play basketball? 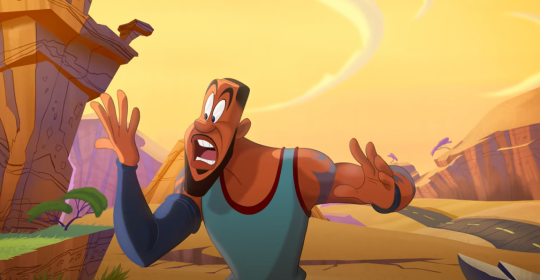 LeBron also popped up as a cartoon character in the flick (Picture: YouTube)

And if he’s really that intuitive, why did he try to go up against the best baller in history? Even someone who has rarely paid attention to games knows that LeBron’s talents are on another level – with or without added cheat codes.

We’re barely given any time with the leading man and his other family members to really push the climax home, except for a few seconds with his criminally underused on-screen wife, Kamiyah (Sonequa Martin-Green), eldest son Darius (Ceyair Wright) and daughter Xosha (Harper Leigh Alexander). 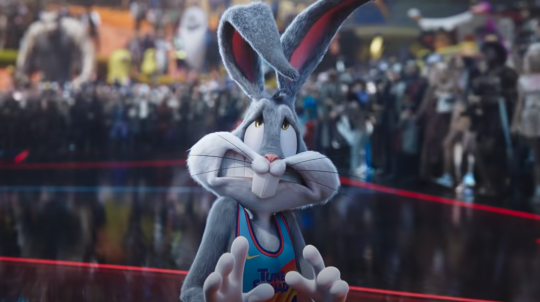 Bugs Bunny was about as much help as you can imagine on the court (Picture: YouTube)

Plot aside, the movie felt slightly too long, with a run-time of nearly two hours, and too many Tune-tastic cameos shoe-horned in. When we got to the all-important game, as exciting as all the graphics were, the sequence felt hugely drawn out and not even the athlete’s ‘inspirational’ team-talk could really save it.

There are some laughs to be had – with the biggest one coming at the sniff of a possible Michael Jordan cameo that doesn’t quite go to plan – and there are some heartfelt scenes, but it’s not enough to overtake the love we have in our hearts for the original.

For his first starring role away from the court, LeBron gave a fun, personable performance that could win the hearts of many, but he didn’t manage to shoot and score his way to success this time.

Space Jam: A New Legacy is in cinemas from July 16.