Eating disorder charity Beat has raised concerns about the ‘graphic’ and ‘glamorising’ scenes of Princess Diana’s battle with bulimia that were included in Kristen Stewart’s new film Spencer.

The highly-anticipated movie is a fictionalised account of three days from the late Royal’s life during a Christmas at Sandringham amid the breakdown of her marriage to Prince Charles.

However, it does include some elements of reality, including the Princess’s eating disorder, which she spoke out about before her death.

Martha Williams, a Clinical Advice Coordinator at eating disorder charity Beat, told Metro.co.uk that, while it’s important to see representations of eating disorders, it needs to be done responsibly.

‘One thing that we were quite concerned about in Spencer’s representation of bulimia was that it included some quite graphic eating disorder behaviours, there was self harm in there, there were specific mentions of weight throughout the film, and eating disorders, as we know, are really competitive illnesses, and I think that showing such specific behaviours can kind of serve as an inspiration to people that are unwell,’ she said.

‘One thing that probably concerned us the most was that, in the film’s trailers or the synopsis, there was no mention of Diana’s eating disorder despite the behaviours and discussions featuring heavily throughout Spencer. So our concern there is that it means viewers might not be prepared for the level of detail that was included in the film.

‘Also, some aspects of the film, we felt, seemed to glamorise the eating disorder. So, for instance, at one point there was an image of Diana wearing a ball gown and slouching over the toilet, and I think the issue with glamorising eating disorders is that it adds to the stereotype. [It’s seen] as illness of luxury and a middle class white female’s disease, which obviously just isn’t the case.

‘What we would do is [urge the filmmakers] to include a trigger warning and, given the content of the film, we would advise anyone who’s currently unwell or concerned about their health not to watch Spencer, and I think if they do watch Spencer, we would really encourage people to go to our helpline for support, which is open 365 days a year.’

It has not been confirmed whether the filmmakers of Spencer spoke to an eating disorder charity during the making of the film, however, Metro.co.uk has put this question to them. Beat confirmed to us: ‘Beat were invited to a screening of Spencer in October, after which we raised concerns about the content of the film. This is the extent to which Beat was involved.’

‘We don’t feel negatively towards the whole film,’ Williams continued. ‘There were aspects of the film where Spencer represented bulimia well.

‘What we really liked was Spencer’s focus on bulimia which is typically represented far less than anorexia. When you look in the media, all you really see is anorexia. So I think representing a wide range of eating disorders in the media can really help to raise awareness of different signs and symptoms and I think the strength of that is that it can help people to recognise the signs in themselves or others and reach out for support.

‘And I think the film also highlighted and made it really clear that bulimia is a serious, all-consuming mental illness that can cause people to feel a great deal of guilt and shame. I think they really portrayed that with Diana. 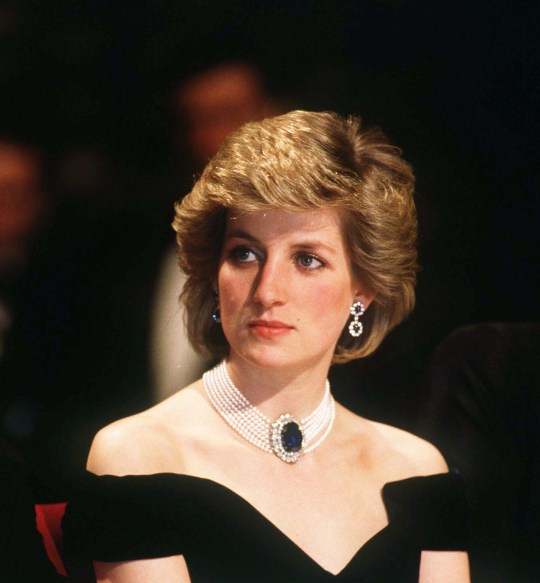 Princess Diana spoke out about her eating disorder (Picture: WireImage)

‘Also, I think some of the scenes were really powerful – so when Prince William was trying to comfort his mother, I think that shows the strain of eating disorders on the rest of the family and how hard they try to support their loved ones through the eating disorder. And I think that’s something that a lot of people go through.’

Speaking generally about how filmmakers can represent eating disorders responsibly, Williams added: ‘We would urge filmmakers just to avoid any specific numbers, so about weight or calories, and I think that it’s crucial for filmmakers not to include emaciated scenes or images because the problem with this is if you always just portray someone in the media with an eating disorder as really emaciated [or] underweight, it adds to the misconception that, to have an eating disorder, you have to be really underweight. And actually, that’s not the case at all.

‘A lot of people that present with eating disorders are either a normal weight or a healthy weight, or can be overweight. If you keep reinforcing the stereotype that you have to be underweight to have an eating disorder, this stops people from coming forward. People of all shapes and sizes have eating disorders. So we’d like to reassure people that there is support for anyone that needs it.

‘I also think that filmmakers shouldn’t include graphic eating disorder behaviours or self harm, because, again, this can kind of be inspiration for people who are unwell. And actually Beat has media guidelines, which are on the website and we’ve put this document together to try and support people to represent eating disorders in the most responsible way possible in the media. So I think we would always encourage people to either contact us directly – we’re more than happy to support – or to have a look at our media guidelines.’

In terms of the future of representation of eating disorders, Williams explained that there’s a long way to go.

After struggling to think of films that represent eating disorders particularly well, she pointed out that a lot of times, we see a stereotypical presentation of them.

Princess Diana confirmed she had struggled with bulimia during her controversial 1995 interview with Martin Bashir.

‘I had bulimia for a number of years,’ she said. ‘And that’s like a secret disease.

‘You inflict it upon yourself because your self-esteem is at a low ebb, and you don’t think you’re worthy or valuable.’

Stewart previously told PA of the film: ‘Our first step into this always was with love and admiration, and if we didn’t love her we wouldn’t have made the movie.

‘So, it comes from a genuinely careful and considerate place, and we’re lucky to have had the opportunity.’

Spencer is in cinemas now.

If you’re worried about your own or someone else’s health, you can contact Beat, the UK’s eating disorder charity, 365 days a year on 0808 801 0677 or beateatingdisorders.org.uk.