The Little Mermaid: Halle Bailey shares first look of herself as Ariel

Halle Bailey has shared a little insight into the upcoming remake of The Little Mermaid (Picture: Instagram/hallebailey/FilmMagic)

Halle Bailey has blessed us with the first glimpse of herself as mermaid Ariel in the hotly-anticipated live-action remake of Disney’s The Little Mermaid, as shooting wrapped on the delayed film.

The 21-year-old singer and actress also paid tribute to her ‘lovely and talented’ co-stars and the film’s ‘beautiful’ crew as she reflected on the ‘toughest’ experience of a lengthy shoot during the pandemic.

In a stunning photo posted on Instagram, Halle is sitting in the waves as the sun sets in Sardinia, where the film was shot, casting a beautiful orange backlit glow.

Although it’s a little tricky to make out many details of her in her full mermaid glory, the star wears her hair long and in a far more natural hue, with just a hint of russet, compared to her 1989 animated counterpart’s flaming red locks.

This was more obviously seen in snaps from the set that were leaked in June, where Halle as Ariel was seen hitching a ride on a wagon and rehearsing a scene on the beach in a wetsuit.

Here though, the top of her tail can just be made out above the water and seems to be a more neutral tone than bright green, while it also seems that the iconic purple shell bra has been ditched for a more realistic (and dare we say, more comfortable?) top.

In an emotional reflection about the long process, the Chloe x Halle R&B singer wrote: ‘and just like that..that’s a wrap ❤after auditioning for this film when i was 18 just about to turn 19 , to now finishing filming through a pandemic when i turned 21 ..we have finally made it…?’

‘i feel so grateful to have experienced this film in all of its glory..it has been the toughest experience being away from everything and everyone i’ve ever known, to feeling self doubt/ loneliness, but also feeling such freedom and perseverance as i’ve reached the end.’

Crediting the experience for ‘ma[king] me so much stronger than I ever thought I could be’, Halle gave shout outs to her castmates, calling Jonah Hauer-King, who plays Prince Eric, ‘my friend for infinite lifetimes’, and shared how ‘proud’ she was of Jacob Tremblay, who is voicing Ariel’s best friend Flounder the fish.

It seems rock-solid friendships were made on the set of The Little Mermaid as the star also shared goofy snaps of some of the crew and cast rocking a long red Ariel wig and a shell bra, in a cheeky throwback to the animated classic, including Jonah. 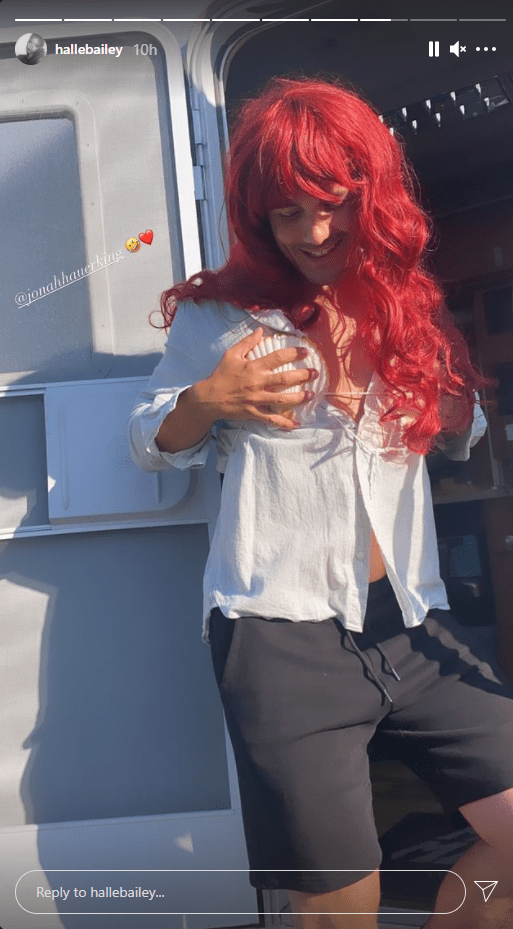 Halle took the time to praise Javier Bardem, who plays her father King Triton, Melissa McCarthy, who will be sea witch Ursula, Awkwafina, who voices Scuttle, and Daveed Diggs, who takes on the role of Sebastian, as ‘masters of their craft’ who were ‘so welcoming and open to little old me’.

Anticipating the excitement that’s built up around the remake as it finally moves to its post-production phase, Halle exclaimed: ‘i cannot wait for time to speed up so you all can watch this film because it was made with so much love (plus blood sweat and tears).’

The film is directed by Chicago and Marry Poppins Returns’ helmer Rob Marshall and will feature brand new songs alongside the classics by Alan Menken and the late Howard Ashman, with Hamilton’s Lin-Manuel Miranda stepping in to provide words to Alan’s music.