Andrew Lincoln’s Rick Grimes is returning – but this time to the big screen (Picture: AMC)

The Walking Dead creator Rick Kirkham has vowed that the upcoming Rick Grimes film will be ‘worth the wait’ following a string of delays.

After the trailer for the AMC show’s season finale was released during Comic-Con 2021, an update was given on the status of the Andrew Lincoln-led movie, which will definitely arrive before 2032.

‘Andrew Lincoln is amazing, I miss seeing Andrew Lincoln running around as Rick Grimes,’ Kirkham teased. ‘I can’t wait until we’re filming this thing and then this thing’s coming out, it’s gonna be awesome.

‘Everybody’s working very hard to make this thing as good as it can be. All I will say: we don’t want a bad Rick Grimes movie.

‘We want an amazing Rick Grimes movie, so everybody behind the scenes is making sure that when this comes out it was worth the wait and it is actually the special, character-building Rick Grimes journey that everybody wants it to be.’ 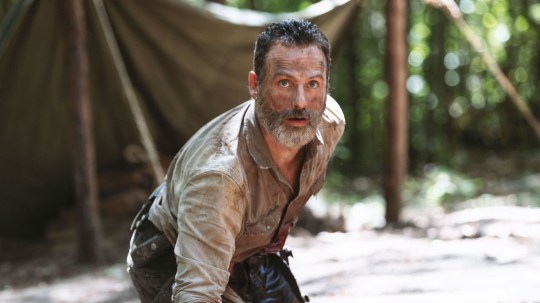 Kirkman added that the film won’t be rushed, with plans in place to make sure that ‘it’s perfect’.

‘And when it finally comes out, when we’re showing trailers and stuff, you’ll see. You’ll be like, “That’s exactly what we wanted. I’m so glad they waited”,’ he continued.

Rick was last seen in season nine, losing his group, falling off his horse and being impaled on a bar before being rescued by Anne (Pollyanna McIntosh) who waved down a mysterious helicopter and whisked Grimmy off to a location currently unknown.

As soon as fans waved goodbye to the hero, AMC confirmed three Rick Grimes-centric movies were on the way.

Naturally, with a real-life pandemic going on outside of The Walking Dead, the films have been delayed.

The Walking Dead returns August 15 on AMC Plus or August 22 on AMC.