Maverick is back where he belongs (Picture: Paramount Pictures)

One of the producers of Top Gun: Maverick has opened up about the challenges the creators faced when embarking on the huge challenge of creating the film.

Creating any blockbuster is no walk in the park… but going about producing a sequel to one of the most celebrated action films of the 1980s – starring Tom Cruise as the lead – was always going to be another level.

Top Gun: Maverick ups the ante with high-octane stunts, a cast consisting of familiar faces and newcomers alike, powerful music and a compelling story, but along the way the makers of the movie had their doubts.

At the London premiere on Thursday evening, Metro.co.uk writer and producer Christopher McQuarrie if there was ever a moment during the making of the film when they thought that it was perhaps too ambitious, or questioned that they were ever going to make it a reality.

‘Oh every day. Every minute,’ he admitted.

Despite the enormous fanbase the 1986 Top Gun film had, Christopher – a longtime collaborator of Tom’s – said that they ‘never took it for granted’ that people would automatically come to see Maverick just because it was a continuation of the original.

‘We never took it for granted, we knew we had a really tall order. We never said, “Oh, they’re just gonna come because it’s Top Gun,”’ he stated.

‘You really have to make a film that stands on its own.’

Maverick is still as sharp as ever (Picture: Paramount Pictures)

After the long period of piecing the puzzle together, including a three-year delay from the original release date, the time has come for fans to finally take in Top Gun: Maverick in all its glory.

Christopher said that he knew they ‘had something’ when they tested the movie with audiences for the first time.

‘It was a very rough form, the music wasn’t finished, the sound design wasn’t finished, Lady Gaga’s song wasn’t in it. And there was spontaneous applause. That’s when I knew we had something special,’ he recollected fondly. 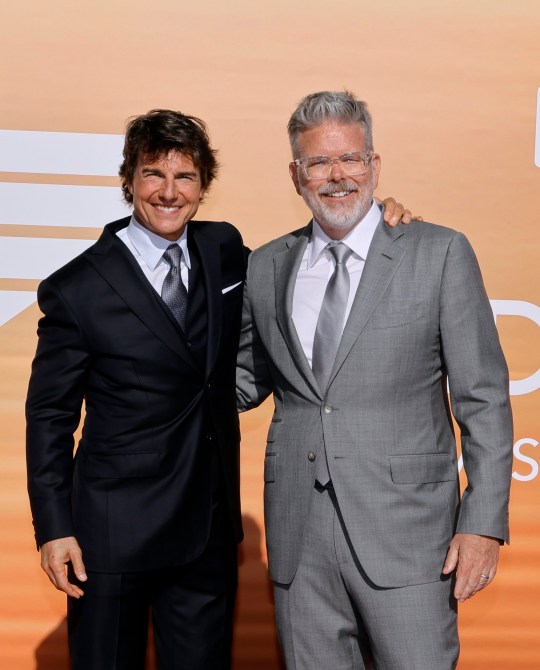 The screenwriter has worked with Tom on several occasions throughout his career, including on Jack Reacher, Mission: Impossible and Edge of Tomorrow.

However, the adrenaline-loving actor can still surprise him from time to time, he revealed.

‘I’ll think I’ll know exactly what Tom’s going to do when I bring him something, and he constantly surprises me or looks at it with a different perspective. That’s any day on the job with Tom.’

Top Gun: Maverick will be available in cinemas from Friday May 27.