Tom Cruise has opened up about the emotional reunion he shared with Val Kilmer in Top Gun: Maverick, 36 years after their characters’ rivalry turned to friendship in the original film.

On Thursday night, the red carpet was rolled out in London’s Leicester Square for the explosive blockbuster, with Prince William and Kate Middleton, the Duke and Duchess of Cambridge, greeting the cast before heading into the cinema.

The movie is an extremely nostalgic watch for Top Gun fans, especially when Val, 62, and Tom, 59, share the screen once again as Admiral Tom ‘Iceman’ Kazansky and Captain Pete ‘Maverick’ Mitchell respectively.

At the UK premiere, Metro.co.uk asked Tom how it felt to reunite with Val, as he said that it was a ‘lovely’ experience while one of the producers emphasised how ‘emotional’ it was to witness.

‘It was lovely. The whole experience, you know, 36 years to make this film. There were so many moments in making it that were very special, incredibly unique,’ the Edge of Tomorrow star said.

‘He’s an actor that I greatly admire, so it was wonderful.’


Iceman and Maverick had a tense relationship to start (Picture: Paramount/Kobal/Rex/Shutterstock)

Iceman has risen the ranks since we last saw him (Picture: Paramount Pictures)

Producer David Ellison, who’s previously worked with Tom on films including Jack Reacher and the Mission: Impossible franchise, said that Maverick and Iceman’s scene was his ‘favourite in the movie’.

‘The first movie made me want to become a pilot. This was the first movie when we originally started working with Paramount 12 years ago we said we wanted to make,’ he said.

‘So to see the two of them on set, the emotion that people hopefully get from that scene, was how it felt to be on set. It was a surreal experience.’

In 2017, it was revealed that Val had suffered a two-year battle with throat cancer and had undergone a procedure on his trachea that had ‘reduced his voice to a rasp’.

A few months previously, the actor wrote on a Reddit AMA that he had a ‘healing of cancer’, saying: ‘My tongue is still swollen altho healing all the time. Because I don’t sound my normal self yet people think I may still be under the weather [sic].’

In a profile of Val published in The New York Times Magazine in May 2020, it was said that he used a tracheostomy tube, with his voice sounding ‘something between a squeak and a voiceless roar’.

After the cast of Top Gun: Maverick appeared at the Cannes Film Festival, Val celebrated the release of the film, tagging Tom as he tweeted: ‘Congratulations old pal. Well deserved reception. Here’s looking forward to another 36 years of fun!’

In his 2020 memoir, I’m Your Huckleberry, the actor explained how he begged to return to the franchise as Iceman. 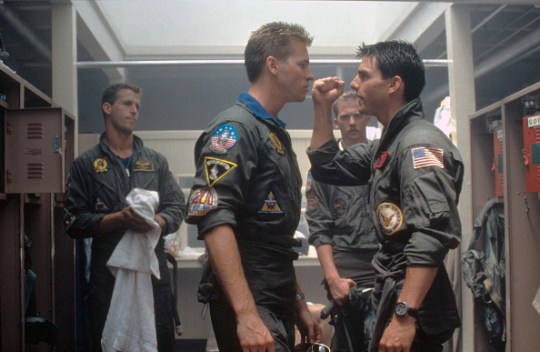 He wrote: ‘Tom was Maverick, but Maverick’s nemesis was Iceman. The two went together like salt and pepper.

‘It didn’t matter that the producers didn’t contact me. As The Temptations sang in the heyday of Motown soul, “Ain’t too proud to beg.”’

Top Gun: Maverick will be available to watch in cinemas from Friday May 27.