DaBaby slammed for ‘homophobic’ comments about gay men and HIV

DaBaby has been criticised for comments made during his set at Rolling Loud in which he claimed people with HIV and Aids ‘die after two, three weeks’ while also making comments about gay men which many have slammed as ‘homophobic’.

The rapper took to the stage at the Miami music festival over the weekend, and while there was plenty to talk about when it came to his headline-grabbing performance – in which he brought out Megan Thee Stallion’s nemesis Tory Lanez right after she performed – his comments have raised eyebrows.

In a clip being circulated on social media from the event, he tells men who aren’t ‘sucking d**k in the parking lot’ to put their phone torches on, while also reaching out to those who ‘didn’t show up’ with a sexually transmitted infection.

He is heard saying, while pacing the stage: ‘If you didn’t show up today with HIV, Aids, any of them deadly sexually transmitted diseases that’ll make you die in two, three weeks, then put your cellphone light up.

DaBaby’s comments caused irate social media users to condemn the rapper, with many pointing out his comments on HIV and Aids do not reflect the facts.

While there’s currently no cure for HIV, with an early diagnosis and effective treatments, most people with HIV will not develop any Aids-related illnesses and will live a near-normal lifespan.

One fumed on Twitter: ‘Hoping somebody checks #DaBaby about his ignorance regarding HIV & STI’S. Ridiculing people about that is not cool at all. [sic]’

Dababy brought out T*ry L*nez to his performance and went on a homophobic rant last night? Heâs dunzo

I’m not a fan of cancel culture but its time for the industry to let go of DaBaby. His comments specifically targeted people living with HIV, AIDS, women, and gay men, unprovoked. Not only was it ignorant as hell, offensive but sir, what the hell is wrong with you? He has to go.

He was fast losing fans, as another wrote: ‘People live with HIV on a daily and I’m pretty sure they’re were people at the concert who were positive so for dababy to say that homophobic uninformed bulls**t last night I can no longer support anything he does period. [sic]’

Many others tapped in DaBaby collaborator Dua Lipa and wanted her two cents, as one wrote: ‘How is DaBaby gonna collab with Dua Lipa, who is A QUEEN to the gays, and then spew such homophobic bulls**t? Make it make sense!’

DaBaby – real name Jonathan Lyndale Kirk – was also slammed for seemingly pouring a whole heap of fuel on his recent beef with Megan Thee Stallion by bringing out Tory Lanez during his controversial set. 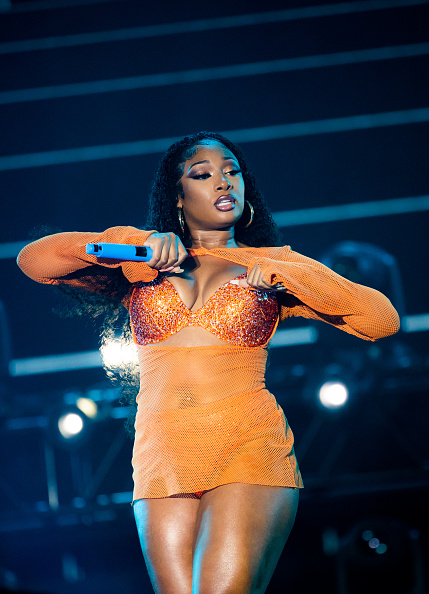 Tory was accused of shooting Megan Thee Stallion in the foot last July and was arrested on assault charges.

He has denied the allegations and pleaded not guilty to one count of assault with a semiautomatic firearm, and one count of carrying a loaded, unregistered firearm in a vehicle.

However, his surprise appearance at the Miami music festival over the weekend has not gone down well with fans after Tory emerged from a costume to perform SKAT alongside DaBaby.

Many felt the move was off, seeing as Megan had just come off stage following her own performance at the Hard Rock Stadium in Miami Gardens.

Megan and DaBaby clashed publicly recently after Megan saw he had shared a fan comment which poked fun at her alleged shooting at the hands of Tory last summer.

In reference to the incident and DaBaby’s January arrest for allegedly punching a club promoter in the face, a fan had tweeted of his and Tory’s track SKAT: ‘I guess @DaBabyDaBaby and @torylanez cool now bc they shot somebody and don’t have to do no jail time.’

After Megan found out about the repost, she slammed DaBaby for behaving differently towards her in public and in private and fumed at the way her shooting has been ‘downplayed’.

‘Support me in private and publicly do something different…these industry men are very strange,’ she tweeted. ‘This situation ain’t no damn “beef” and I really wish people would stop down playing it like it’s some internet s**t for likes and retweets.