DEVASTATING pictures show a little bear cub clinging on to a tree as the Oregon Bootleg fire torched its habitat last week.

As the largest wildfire in the United States ripped through The Beaver state destroying thousands of acres, scorching homes and habitats alike.

A little bear cub clings to a tree during the Bootleg wildfire blazeCredit: AP 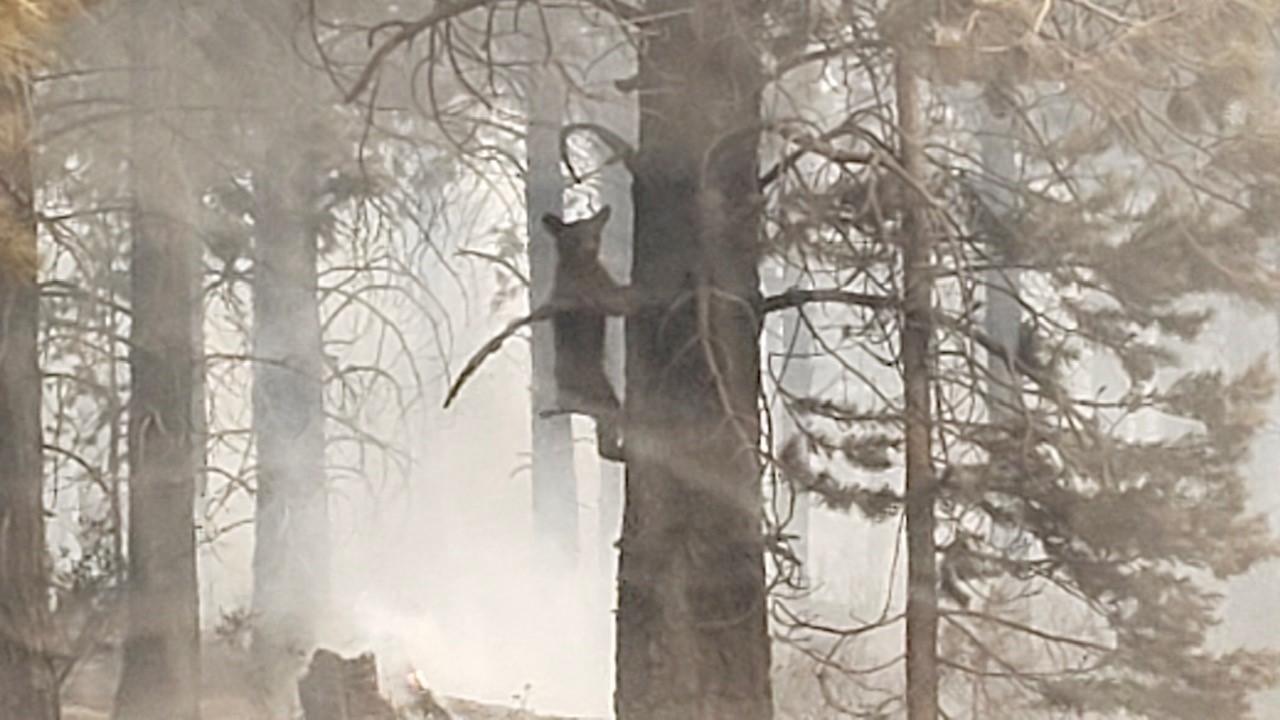 He didn’t drink the water left out by firefighters and climbed up a nearby treeCredit: Bootleg Fire Info

Safety Officer Bryan Daniels found baby bear on the southeastern flank of the Bootleg Fire on 28 road and got out of his car to help the terrified critter, who ran up a nearby tree.

More firefighters arrived on the scene as the cub made its way down the truck and emergency personnel left water for it, but the scared animal refused to drink it.

An older female bear was seen by fire managers minutes before Daniels saw the cub and officials told KDRV that “it is likely that it reunited with its mother.”

“It’s very good news that the animal is not an orphan,” they told the paper as The Oregon Department of Fish and Wildlife warned people not to try and pick up animals.

Striking a positive note, fire managers also pointed out that not all of the wildlife die when wildfires rip through the countryside.

“While fire can reduce important habitat and food sources, it can also create new habitat and opportunities for some species,” they told the newspaper.

“This bear servers as a reminder that there are wildlife on roads in the fire area. As the public drives on area roads that are open, please use caution.

“A lot of slow, heavy firefighting equipment are on the roads and smoky conditions persist. Also, you may encounter wildlife such as this young cub.”

The heart-wrenching bear sighting comes as chilling satellite footage revealed the extent of the wildfire with smoke clouds billowing out of the US and Canada on Wednesday.

Firefighters scrambled to mitigate the damage at the start of the month before the vicious blaze triggered fire tornado warnings as it scorched the Oregon landscape.

Scientists say the large inferno, which has destroyed more than 300,000 acres, is changing weather patterns by affecting winds and disrupting the atmosphere, the New York Times reported.

The unpredictable winds have also caused the inferno to light rows of trees and ignite “spot fires” in random locations.

Scientists are also worried about lightning strikes as a mixture of smoke, hot air and water can create towering clouds, leading to thunderstorms.

The stark warning comes as the blaze has already burned through an area larger than the city of Los Angeles.

The blaze erupted on July 6 and more than 2,000 firefighters have been trying to keep the flames under control.

The Bootleg Fire is burning about 300 miles from the state’s largest city, Portland, in and around the Fremont-Winema National Forest.

Over 160 homes and buildings have been destroyed as residents have been told to evacuate as the blaze ballooned to a third the size of Rhode Island as thousands are evacuated this week.

Satellite footage captured by the National Oceanic and Atmospheric Administration shows the fire burning from space as smoke migrated.

Wildfires have ravaged parts of the southwestern United States as the West Coast remains trapped under a heatwave.

Raging infernos gutted homes and cars in Doyle, California earlier this month as a devastating blaze was pushed along by heavy gusts.

Scientists have warned that the persistently high temperatures could lead to a “megadrought”, which has the potential to unleash a climate catastrophe along the West Coast.

Water levels in the Great Salt Lake, Utah are almost at a record 58-year low and they are nine feet lower than average, according to the Daily Star.

Arsenic could be picked up by the wind as soils dry out, creating a potential dust storm.

The western US baked as Las Vegas hit a record of 117 degrees – barely two weeks after a 1000-year heat event brought record highs of 116 and 121F in Portland and Lytton, Canada.

Scientists believe the 1000-year heat event that has the Northwest would have been “virtually impossible” without human-caused climate change.

In Seattle, temperatures are expected to top at 100 degrees for the 15th time this year, putting it on par to reach the city’s record of 21 100-degree days in a year.

The National Weather Service confirmed that it’s the first time Washington state has been in “exceptional drought” since meteorologists launched the Drought Monitor in 2000, according to CNN.

During the week of June 25, temperatures hit a sizzling 40 degrees above average, setting 175 record high numbers around the Northwest as it drives people and animals out of their homes. 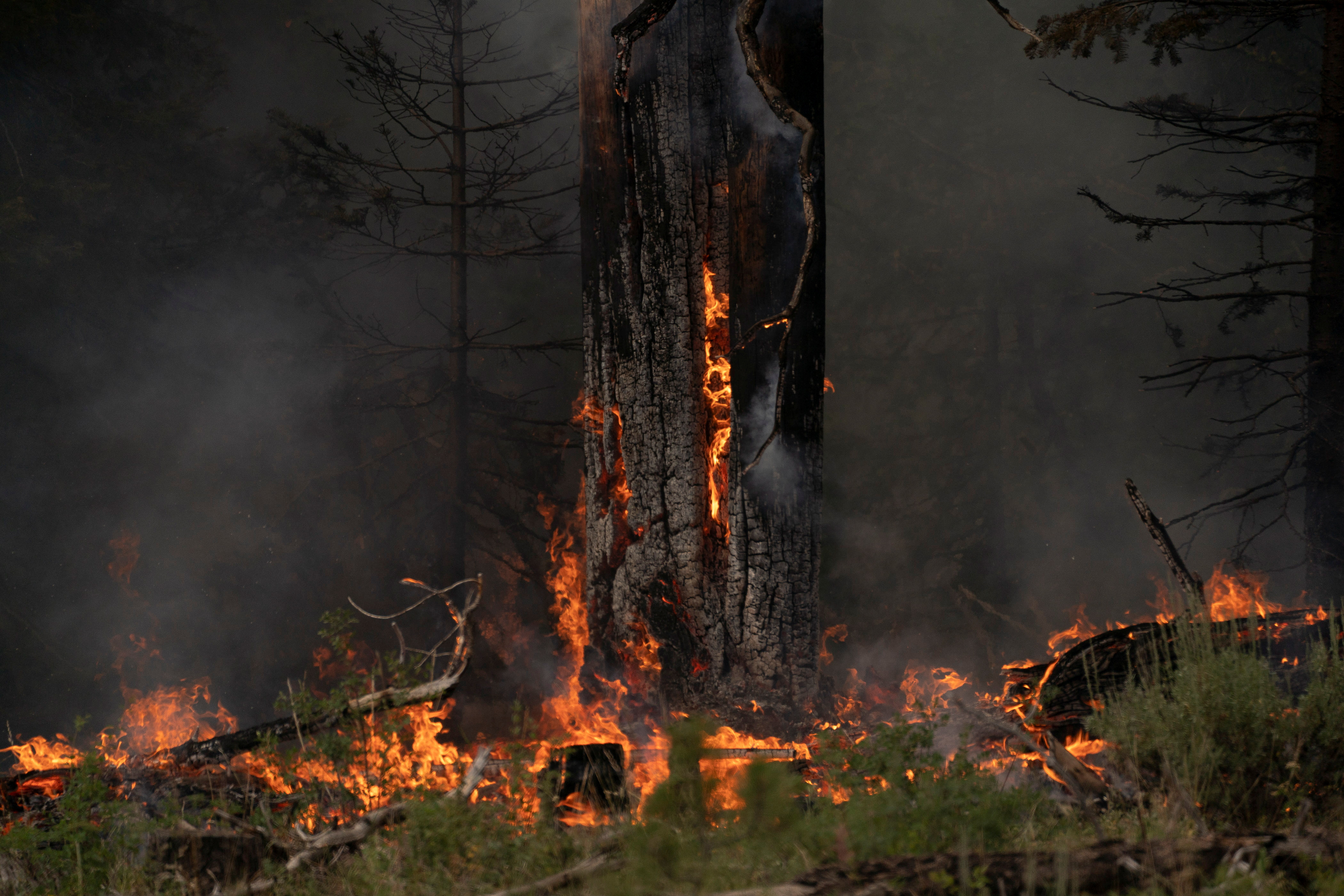 Striking a positive note, fire managers also pointed out that not all of the wildlife die when wildfires rip through the countrysideCredit: Reuters 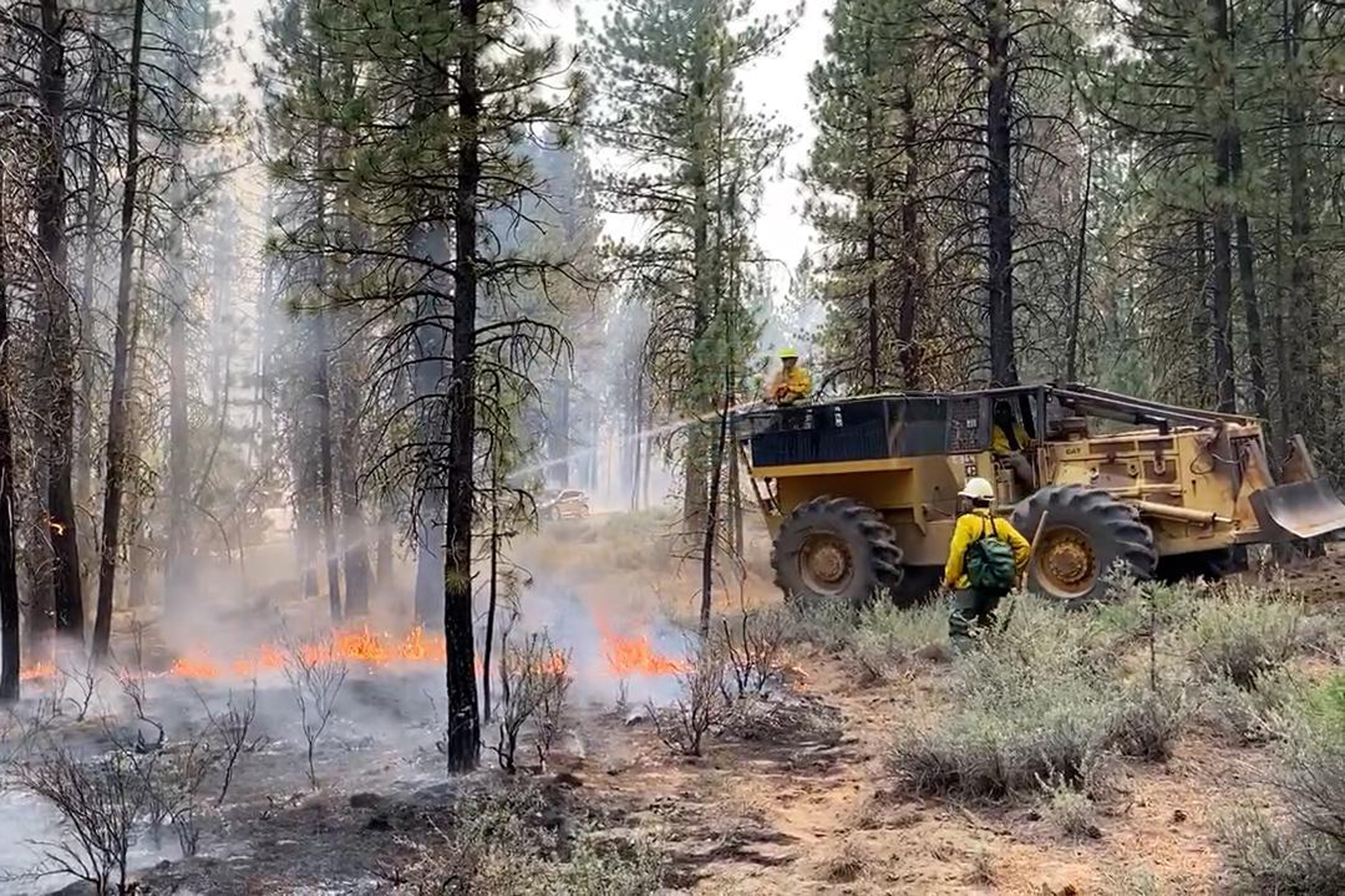 ‘This bear servers as a reminder that there are wildlife on roads in the fire area,’ fire officials saidCredit: AP 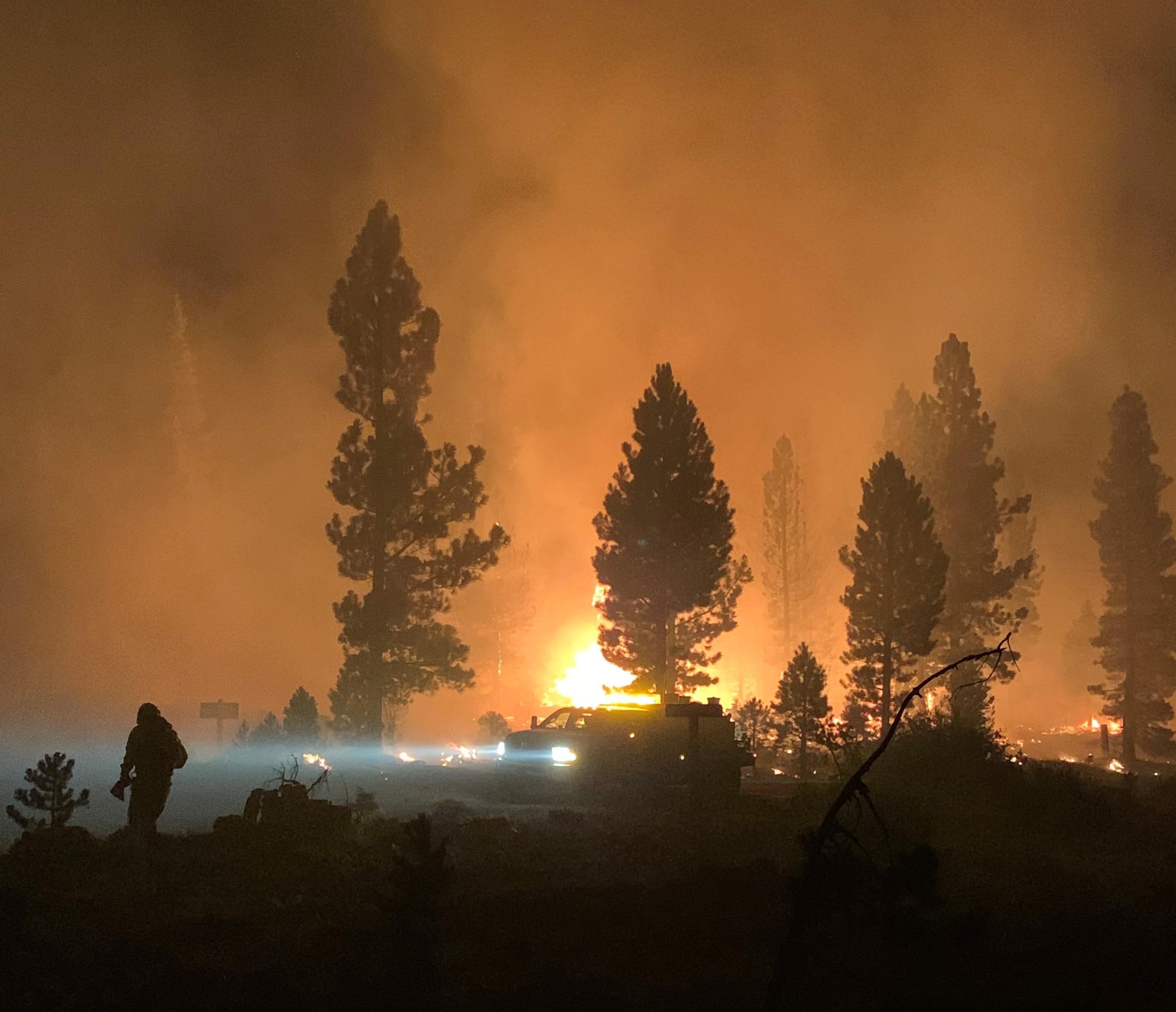 The terrifying blaze has raged in Oregon, destroying homes and habitatsCredit: EPA 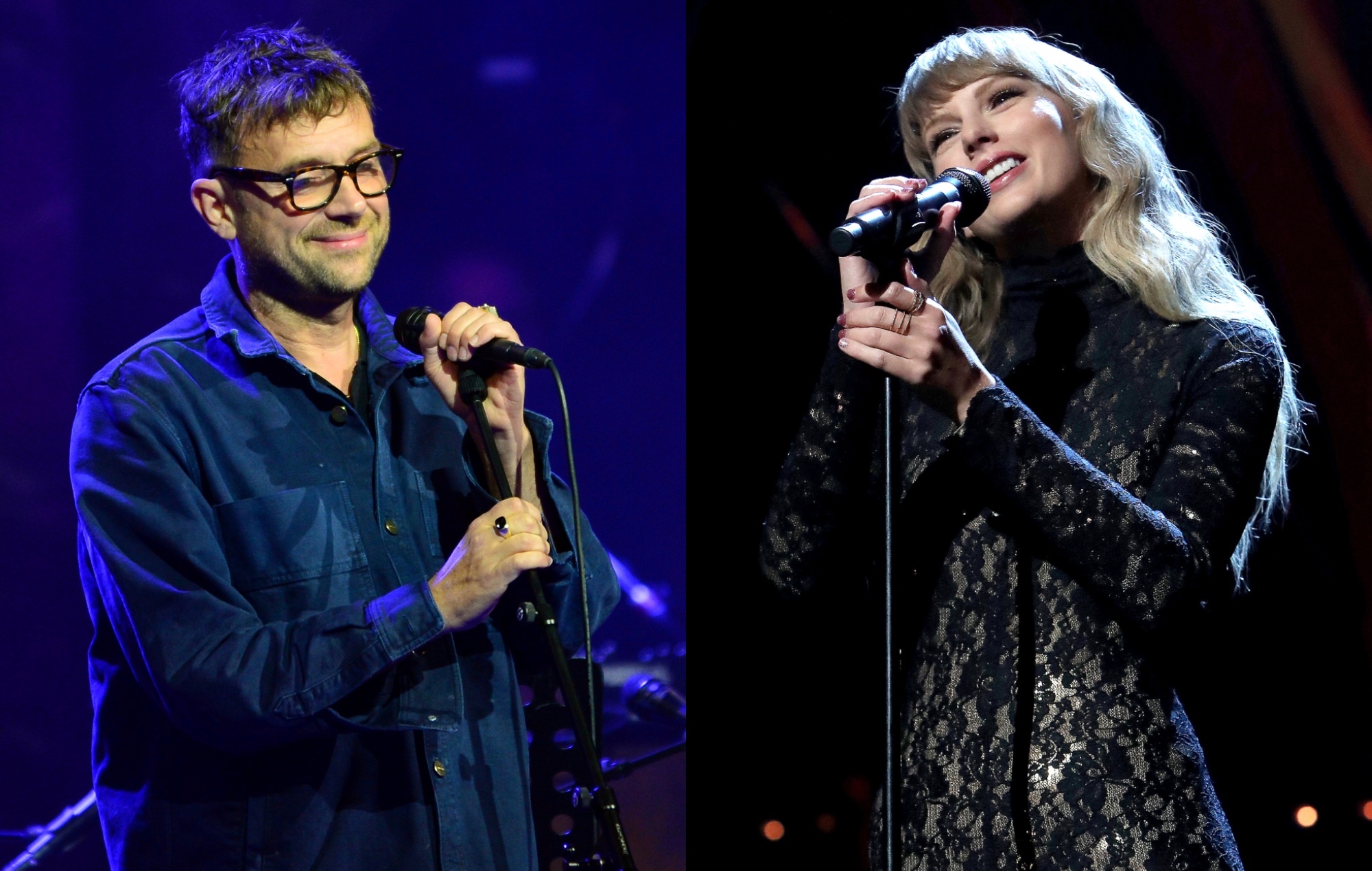