It’s the Spice Girls’ 25th birthday, and they’re celebrating in the best way.

Well, the best way would be a full blown reunion, with Victoria Beckham back, so maybe the second best way.

The iconic girl band are re-releasing their debut album Spice to mark their anniversary, boosting the record with remixes, demos and unreleased tracks.

Emma Bunton, Geri Horner, Victoria Beckham, Mel B and Mel C curated the new Spice 25 themselves, with their favourite bonus tracks and B-sides joining the original tracklist of Wannabe, Say You’ll Be There, 2 Become 1, Love Thing, Last Time Lover, Mama, Who Do You Think You Are, Something Kinda Funny, Naked and If U Can’t Dance.

CD2 features demos for Take Me Home, Last Time Lover, Feed Your Love, If U Can’t Dance and Who Do You Think You Are and the unreleased One of These Girls, as well as a radio mix of Say You’ll Be There with a saxophone replacing the harmonica solo.

The CDs come in an A5 hardback booklet, with a collection of iconic images and a set of six Spice Girls postcards, while the original album is also available on limited edition vinyl and cassette.

Baby Spice herself Emma said: ‘From the first wannabe baby steps to conquering the whole world with a team of Spices, thank you doesn’t seem enough to all of you who have supported us, followed in our footsteps, walked in our great big shoes and who have shared our dreams. It’s been 25 years of pure magic. Spice Girls forever!!!’ 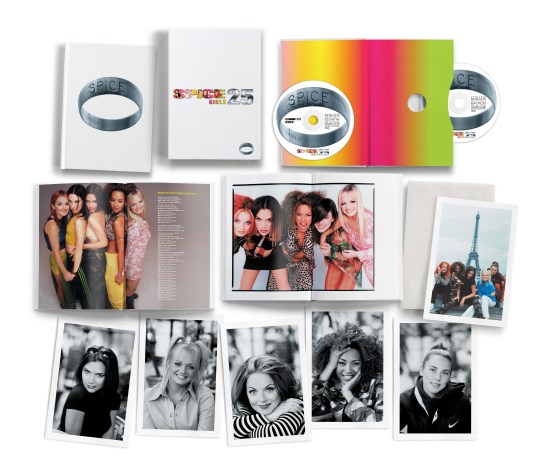 Spice 25 comes with all sorts of added bonuses

Geri, aka Ginger Spice, said: ‘To our diehard and loyal fans; without you there is no us – sending endless love and gratitude. Whoever you are, whatever your dreams – live them, be them. The Spice Girls motto is testament to that.’

Sporty Spice Mel C added: ‘25 years, wow! I have so many wonderful memories of writing, recording, promoting and touring this album and so many people to thank. This is the record that set us off on our incredible journey. A huge thank you to our fans and family all around the World. Thank you for always being there with your unrelenting support and making our dreams come true. My love and gratitude always.’

Mel B, or Scary Spice, said: ‘All I ever wanted was to be accepted and to make everyone around me – gay, straight, brown, black, shy or loud like me – to feel they can celebrate who they are and to be free to be themselves. All I hope – 25 years on – is that message has been heard loud and clear. It’s true that in the end love IS all you need so I thank everyone who has ever bought a Spice Girls record or stood in the rain to greet us or got dressed up in pink, in a tracksuit, a ginger wig, a leopard print catsuit or put on Vic’s iconic pout!’

And Posh Spice Victoria, who didn’t return for 2018’s reunion tour, said: ‘We couldn’t let 25 years pass without thanking the fans for their incredible support. There are so many people who have played a part in the success of the Spice Girls throughout the years, you know who you are and we thank you.’

Spice was released in November 166 and spent 15 weeks at number one in the UK altogether, as well as selling 23 million copies worldwide and becoming the third best-selling album of the decade in the UK.

While it may feel like a lot more music followed, the band only released two more albums – 1997’s Spiceworld and 2000’s Forever – before going on hiatus.