The rock outfit talk taking their fans to the pub after gigs (Picture: Sports Team)

It comes to something when a top-notch rock star, vying for the No.1 album this week, a Mercury Prize nomination in his pocket and a trip to play New York, Los Angeles and San Francisco at the weekend has to pop home between gigs to put a hot wash on.

‘We’ve all run out of clothes so it’s wash day,’ says Alex Rice, lead singer of Sports Team, easily the most fun, likeable and watchable rock outfit operating today. Well, not many bands keep their sets short ‘because no one wants to listen to an hour and a half of live music’ and then invites the entire audience down the pub.

The band, all six of them, five of whom met at Cambridge University, are currently on a record store tour in a tiny Piaggio van, whose door fell off when they went to meet football legend Stuart Pearce, a fan of the band, outside Wembley Stadium the night of England v Germany, blocking the England team bus in the process. Just another night out with Sports Team.

‘Our fans quite enjoy seeing us as idiots,’ says Alex. ‘But we’re starting to love the van because we’ve noticed whenever you get in it you start to feel sleepy because the engine is under the seats.’

As for going down the pub with the audience… ‘When people come, they just want a fun night out so you do a quick 40-minute show then meet everyone,’ he says. ‘It’s how we started out and they’re all really cool, have got bands and are doing pretty amazing things anyway.’

‘We’re just not very good at doing earnest,’ he adds. ‘When you’re not going on stage all in black and pouting and trying to create a mysterious social media personality, I hope it feels welcoming and that people can come and have a chat. If you’ve got any bunch of mates, all different with big personalities, if you do go too sincere on something someone’s going to shoot it down pretty quick. That’s where the tone of the band comes from.’ 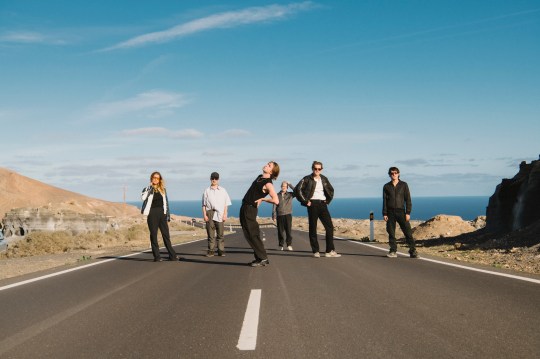 Alex admits that life is now pretty bizarre for the group (Picture: Supplied)

The lyrics from the first album, Deep Down Happy, stood out for tackling the nuts and bolts of living in a regular English town, up to and including Wetherspoons pubs.

‘We’ve probably moved away from that a bit,’ says Alex, his voice deep and quite sexy. ‘When you start, you write about things from growing up, suburban life, but none of us could pretend we’re living a normal life when we’ve been a band for four years. Life is quite bizarre now.’

The group migrated from the Cambridge halls of residence to the Portland Arms to watch live music together until someone said, ‘OK, let’s give it a go!’ ‘I guess we were all listening to the same records, had a guitar and had done a YouTube tutorial to learn AC/DC Back in Black.’

Then, having moved into the same house in London so they had a base while touring, they’d rehearse until the early hours and are still somehow genuinely all very happy to be in each other’s company. 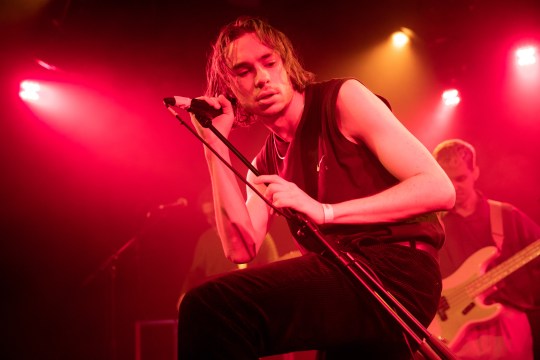 Staying humble is important to Alex: ‘We’re not driving around in Lamborghinis’ (Picture: Redferns)

‘We all see it as an experiment on how to live well when you’re young,’ says Alex. ‘It’s the kind of thing everyone is searching for. We split everything, the money, publishing rights, so there’s never a money question to get annoyed about. It got a bit intense during lockdown when we were all living in the house together permanently, not seeing anyone else.’

Bearing in mind the new album is in a race to the top spot – ‘With Five Seconds of Summer and Mark Owen who I think was in Take That’ – Alex still thinks of the band as up-and-coming.

‘We’re not driving around in Lamborghinis,’ he says, ‘and we’d probably make a lot more money if we went and did a proper job but our ambition was always to do this as a career, so the big joy came when we could all quit our jobs to do this.’

And the secret of enjoying the ride is doing it as a bunch of mates. ‘It’s us against the world!’ he says. ‘It’s hard work, there are a lot of things wrong with the music industry and people like Sam Fender are pulling shows for mental health issues.

‘It can get a bit much and there’s the feeling that if you don’t push yourself, someone else will do it… I don’t think anyone ever feels safe. But we never forget to feel lucky that something you had between the six of you clicked. And it seemed appealing to people!’