Ricky Gervais is ‘overwhelmed’ by the ‘beautiful’ reaction to the final series of After Life (Picture: Netflix)

Ricky Gervais has thanked viewers for the ‘beautiful’ reaction to season 3 of his hit show, After Life.

The actor, 60, who created and stars in the phenomenal comedy-drama, last year confirmed that the show’s third series would be its last, leading to a lot of upset fans.

However, he later admitted he ‘wishes he could do season four’, and stars have suggested Ricky could do a Christmas special in the future.

But for now, fans – and Ricky – have bid goodbye to the much-loved show, with the final episodes dropping on Netflix on Saturday.

The devastating finale brought many – if not all – fans to tears, and The Office star has been ‘overwhelmed’ with the messages he received after thousands binged the entire series within a few hours of its release.

Taking to Twitter on Sunday, Ricky wrote that he had ‘woken up to literally thousands of the most beautiful tweets about #AfterLife3’.

‘Trying to read them all. Thank you. Have a great day.’

The iconic actor attached a photograph of his character, Tony, along with his late wife Lisa (Kerry Godliman) and their dog, another star of the show, German Shepherd Brandy.

After Life revolves around local news reporter Tony as he struggles with the loss of his love, Lisa, from breast cancer, continuously contemplating suicide.

The show’s raw, devastating and, somehow still hilarious, storyline, has resonated with countless people, with the third season currently topping the Netflix charts.

Taking to Twitter, comedian Ricky shared dozens of fans’ reactions to the finale, with many referencing their own losses. 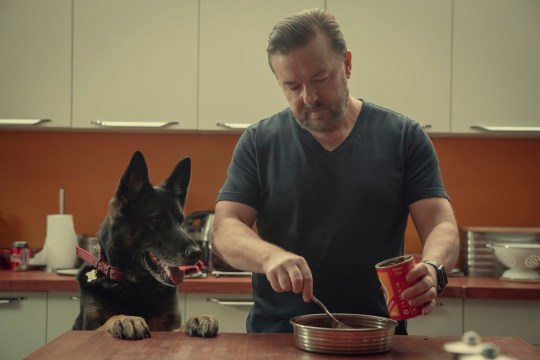 Ricky created, wrote and stars in the comedy-drama (Picture: Netflix)

One person wrote: ‘ My mum lost her husband last year (my dad) she has had a rough year – but I can hear her belly laughing to @rickygervais After Life in the other room – she said it helps her realise what’s important in life and to not just be sad all the time – Thank You Ricky’.

‘What a perfect ending, not a dry eye in sight,’ another wrote, while one said: ‘I am in pieces. Season 3 was beautiful mate’.

One woman, who lost her aunt to cancer, said the series ‘explained how I felt when she passed perfectly’, while another, whose father died last year, said they ‘thought of my Dad every minute’ of watching the show, and thanked Ricky for ‘kick-starting my grieving process’.

Watched #AfterLife3 yesterday. Thank you @rickygervais for capturing so many emotions all in one glorious series. I lost my Auntie to cancer ðthis series explained how I felt when she passed perfectly. X

Lost my Dad in May of last year. He was my hero – and my biggest supporter. I hadn’t felt like I grieved his death. I knew this series of #AfterLife3 would be a tough watch – thought of my Dad every minute of it. Thanks @rickygervais for finally kick-starting my grieving process.

Do not stand at my grave and cry. I am not there I didnât die. @rickygervais I am in pieces. Season 3 was beautiful mate â¤ï¸

Ever since the drama premiered on Netflix in March 2019, it has received critical acclaim, with Ricky himself often speaking of how much the series means to him.

After Life is the first drama written and directed by Ricky that he’s taken to three seasons, having usually finished TV shows with two seasons and a special, as was the case with The Office and Extras. 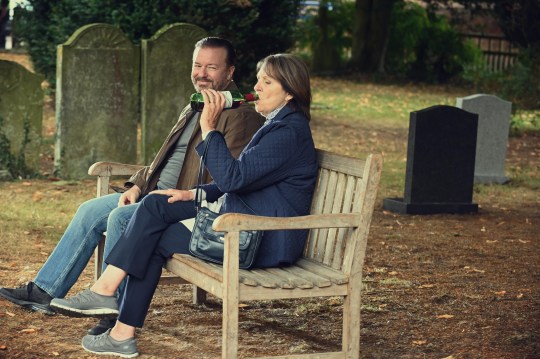 The actor has signed a deal with Netflix to create a new show following After Life coming to an end (Picture: Netflix)

In May 2020, Ricky struck a multi-year deal with Netflix, which was said to have been worth eight figures.

Rather than stretch After Life into further series, the actor is set to make  a new show as part of the deal, with Ricky revealing that he’s ‘got it down to three possible ideas and one is edging its way’.

After Life is available to watch on Netflix