America’s Next Top Model has come under fire from outraged fans who have labeled an episode ‘toxic’ over remarks of a contestant’s body.

Created by Tyra Banks, the reality programme follows aspiring models as they win the chance to kickstart their catwalk career.

The show first launched in 2003 and has produced spin-offs across the world in countries such as Albania and China.

But the early episodes have certainly not aged well – and now footage from a 2003 show has gone viral on social media among angry viewers, who have described the treatment of an asipring model as ‘toxic’.

The two-minute long clip shows Robbyne Manning on the receiving end of a barrage of criticism about her body from judges including Tyra, 48, and Janice Dickinson.

Janice calls the 27-year-old ‘fat’ and ‘huge’ as she scrutinises a picture of her, while Tyra says she has a ‘problem’ with the contestant not being ‘plus-sized on top’ when ‘she is plus-sized on the bottom.’

Trying to get her ruled out of the show, Janice, 67, refuses to entertain the idea of Robbyne going on to win, adding: ‘America’s Next Top Model is not a plus-sized model.’

In another scene in the montage, Robbyne is grilled on why she did not participate in a nude shoot, to which she responds that she ‘didn’t want to feel uncomfortable.’

‘My body is mine and that isn’t what I needed to do in order to get ahead,’ she added.

However, the judges appear to not respect her boundaries, telling her they’re ‘disappointed’ she refused to take part in the photoshoot. 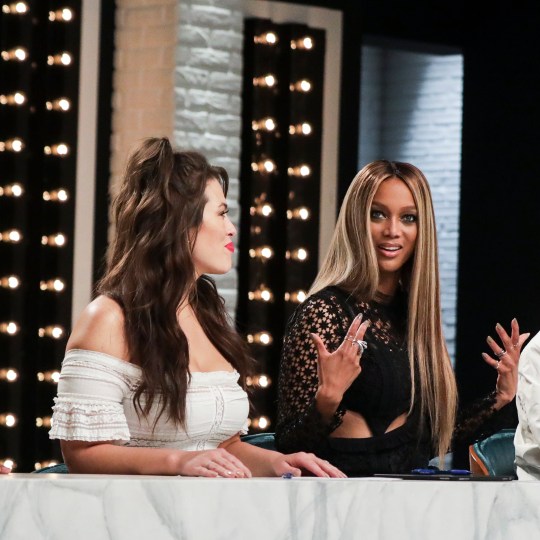 Tyra is best known for her America’s Next Top Model role (Picture: CBS)

Viewers were ‘floored’ by the remarks, with one writing: ‘I’m floored. Full-figured? Botticelli-esque? They’d probably tell me to go hide in a cathedral and never let anyone see my hideousness.’

Another penned: ‘Didn’t realise how toxic this show was.’

‘And I can’t believe I grew up watching it obsessed with it, not realising how damaging it was to one’s self esteem,’ a third said.

It’s not the first time America’s Next Top Model has been slammed for its treatment of models and discourse around body image.

In a 2006 edition of the show, Tyra reprimanded Danielle Evans for not fixing a gap in her teeth.

‘So Danielle, you went to the dentist but refused to have your gap closed,’ Tyra said while gesturing to her own teeth.

‘Do you really think you can have a Cover Girl contract with the gap in your mouth?’

Tyra has since apologised for controversial moments on America’s Next Top Model, admitting it had been ‘insensitive’ in the past.

On Twitter, she wrote: ‘Been seeing the posts about the insensitivity of some past America’s Next Top Model moments and I agree with you.

‘Looking back, those were some really off choices. Appreciate your honest feedback and am sending so much love and virtual hugs.’