An Antiques Roadshow expert stunned one guest after revealing he was unable to value their item because of its ‘distressing history’.

In the latest episode of the BBC programme, viewers were taken to Newby Hall in Yorkshire.

One guest presented expert Mark Smith with a gold medallion which he suspected was from 1955.

After inspecting the item further, Mark explained that the coin was given to people who survived the Holocaust and escaped concentration camps.

He went on to add that because of that reason, he could not put a value to the medallion.

Mark began by asking the guest where they got the mystery coin from, to which she replied: ‘Unfortunately my mum passed away in February this year and while we were sorting out her things we came across the medal that belonged to my grandad Tommy, which was her father. 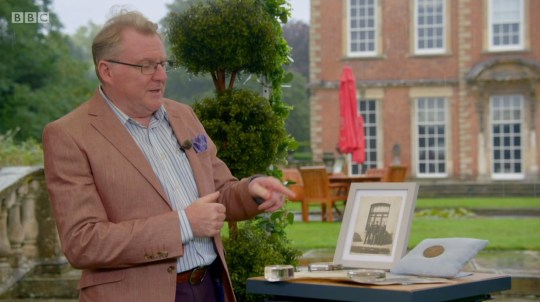 ‘So it’s all been a bit of a mystery because we couldn’t find out why he actually got the medal.’

As Mark quizzed the guest and her daughter further, he discovered that grandad Tommy used to travel to Austen in Belgium.

The antique guru told the guest that the medal was not awarded to her grandfather, he would have received it as a present.

‘It’s something that he does on a yearly basis as far as I can work out where he’s taking probably back old soldiers,’ Mark continued. 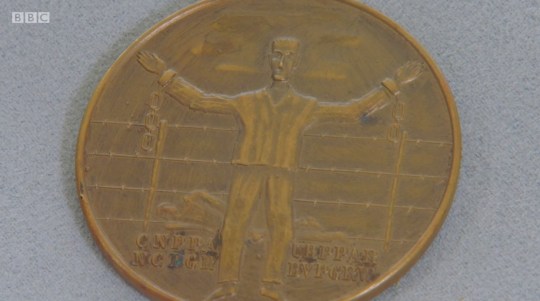 The medal was given to the guest’s grandad (Picture: BBC)

‘And the group in Belgium he has affiliated himself with are a very rare group of people because they are concentration camps survivors.’

Speaking about what the concentration camp would have been like, Mark added: ‘It had two gas chambers, it had firing post to execute people, it had gallows to hang people and it had torture chambers and it’s still there.

‘So the medal you actually have, on this side the front of it shows a prisoner wearing a concentration camp uniform.’

As he pointed to the back of the item, Mark said the symbol of a triangle and B was sewn on to the concentration camp uniform to show you were Belgian. 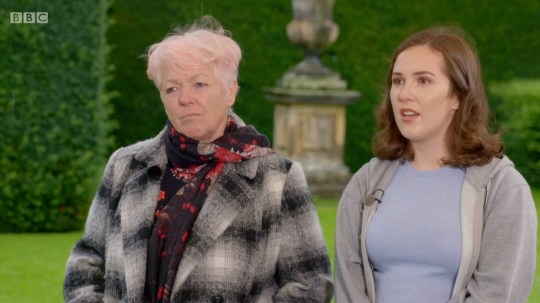 The guest found the item in her late mother’s attic (Picture: BBC)

He added that the colour on the medal also indicated what you were in the prison camp for.

‘If the triangle is yellow you’re Jewish, if it’s black you’re a political prisoner, and if it’s pink it’s a homosexual, it’s a terrible regime,’ he told them.

‘Now in 1955 a programme was started to record the names of everyone who perished in the Holocaust and they’re still doing it today.

‘I think they’re up to about four million names now but that’s when it started and I have a feeling that’s what this is.’

Before Mark explained to the owner of the medallion why he couldn’t give her a price, he pointed to a photograph of a man she had also brought with her.

‘This is the man who gave him the medal and it’s actually signed that he was in the underground forces, part of the resistance movement and he was also in a concentration camp,’ he concluded.

‘Now we always give you a valuation on the Antiques Roadshow.

‘But we don’t give valuations to Holocaust things because there is no price you can put on what someone went through to be awarded that medal.

‘So I can’t tell you what it’s worth but now you know what it is, I hope you think it was worthwhile coming to the Antiques Roadshow.’

Antiques Roadshow airs on Sunday at 6.40pm on BBC One.