When will Sally return to the red sofa? (Picture: James Stack/BBC/PA)

People tuning in to watch BBC Breakfast today may have been confused as to why Sally Nugent wasn’t presenting alongside Dan Walker on the red sofa, with Nina Warhurst taking her place instead.

In October last year, it was announced that Sally had replaced Louise Minchin as a host on the programme, joining Dan, Naga Munchetty and Charlie Stayt as a main presenter.

In a statement, the 50-year-old said: ‘I’m absolutely thrilled to become the new presenter of BBC Breakfast and bring the nation the latest news, top entertainment guests and stories that matter every week.

‘It’s an honour to take the reins from Louise and be part of the UK’s most watched breakfast show.’

Prior to her current role, she co-presented the show on a freelance basis, before her position became permanent upon Louise’s exit.

Where is Sally Nugent today as she misses BBC Breakfast?

On Wednesday January 12, Dan presented BBC Breakfast with Nina, prompting some to question the whereabouts of Sally. 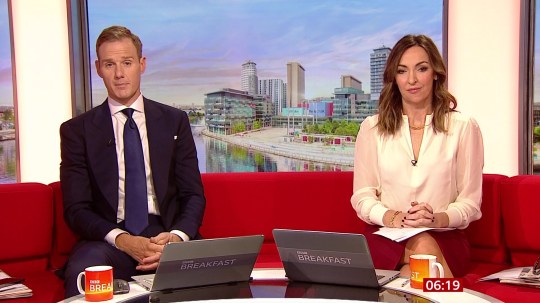 Sally was on the programme last week, presenting with Jon Kay while Dan was off the show.

It’s currently unknown why she hasn’t been in this week, so it might just be that she has taken some annual leave.

Her most recent Instagram post, which was shared in the early hours of the morning, showed what looked like a resort, indicating that she could be on holiday.

‘Where are you Sally miss you not on BBC in the morning,’ one person commented on the post, while another said that they ‘missed her in the mornings’.

Last week, Dan addressed why he wasn’t on BBC Breakfast, informing his Twitter followers that he hadn’t ‘taken some time out of after Strictly’, nor had there been a ‘major presenter shake-up’, adding: ‘I’m just not in this week.’

Therefore, it looks like it may be the same case for Sally as viewers await her return.

BBC Breakfast airs every day from 6am on BBC One and BBC iPlayer.