The incredible total is higher than last year (Picture: BBC)

BBC Children in Need has announced an updated total of £40.3million after a star-studded fundraising effort over the weekend.

The charity has raised an incredible amount of money for good causes, with an evening of celebrity appearances, appeals and celebrations airing on Friday night.

The show featured musical performances from Ed Sheeran and Tom Grennan as well as special editions of beloved TV programmes, including The Repair Shop and First Dates.

Simon Antrobus, Chief Executive, BBC Children in Need, said: ‘It has been a difficult 18 months for children and young people facing disadvantage across the UK, but once again the public has responded with incredible kindness and generosity to help change lives for the better.

‘I cannot express strongly enough the difference this money will make, or the legacy it will leave. Thank you so much to everyone who has supported this year’s Appeal.’ 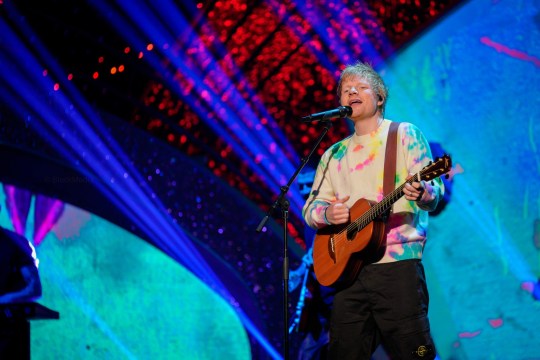 Ed Sheeran performed as part of the show (Pictures: PA)

The event – which raises money for underprivileged and disadvantaged youths across the UK – sees a number of famous faces come together to inspire people to contribute to the charity.

There was plenty for viewers to look out for on Friday, with Charlie Brooks and Simon Gregson taking part in an EastEnders and Coronation Street crossover as their respective characters, Janine Butcher and Steve McDonald, met at the First Dates restaurant.

The fundraiser, which first aired in 1980 and was this year hosted by Graham Norton and Mel Giedroyc, , featured appearances from celebrities including Stephen Fry, Niall Horan, Anne-Marie and Harry Maguire.

Paddy McGuinness, Jimmy Carr, Alison Hammond and Amanda Holden also filmed a special version of their programme I Can See Your Voice.