Dominic Cummings sat down with Laura Kuenssberg for a BBC interview (Picture: BBC)

The BBC has fiercely defended its decision to air an interview with Dominic Cummings after viewers complained it was biased against Prime Minister Boris Johnson.

Political editor Laura Kuenssberg sat down with the PM’s former top aide and grilled him about the behind-the-scenes power struggle and the events of the last year, with the programming airing on BBC Two on Tuesday.

During the interview, Mr Cummings claimed Mr Johnson believes it’s ‘ludicrous’ that he is Prime Minister and also revealed he is in discussions with others about new political projects, including setting up a party.

However, days after the programme ended, the BBC was forced to double down on why it chose to broadcast it.

‘As the Prime Minister’s former Chief Adviser and someone who held a key role in the Vote Leave campaign, Dominic Cummings has been an influential figure in British politics in recent years;  participated in and been privy to many significant political developments,’ the corporation said in a statement.

‘This was Mr Cummings’ first major broadcast interview, and we believe the insights he offered into the Government’s handling of the pandemic and other issues of importance would be of interest to our audience.’

The statement continued: ‘Laura Kuenssberg conducted this interview in a robust manner, repeatedly challenged Mr Cummings on the substance of the allegations he was making, and the motives behind them;  asking him to address questions over his credibility and agenda.

‘She scrutinised his past actions which have been a source of controversy, such as his breach of lockdown, his campaign tactics during the EU referendum, and the implications for democracy of the way he conducts politics.’ 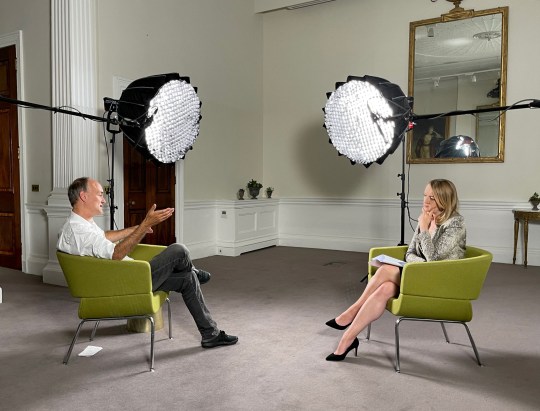 ‘We made clear that this was Mr Cummings’ version of events, gave Downing Street a right of reply, and featured their response to claims he had made, it added.

‘We reflected the context in which this story occurs;  the acrimonious circumstances in which he left Government and the personal animosity that exists between him and some of the individuals involved.’

The BBC’s statement followed a slew of criticism from viewers, with many calling the interview ‘bias’.

‘@BBC_Complaints I’m disgusted by the way the BBC has used Dominic Cummings for its constant bias against the Government,’ wrote one. ‘This man has an agenda to discredit the Government because he was sacked and therefore can’t be trusted why give him this airspace.’

‘The #BBC has REALLY gone to town,’ another added. ‘A whole hour of anti-Tory, Boris bashing, to be broadcast on their prime time TV. They are taking everything that bitter EX-employee Cummings says as gospel truth. This bias is jaw-dropping even for the BBC. The Management should be investigated.’