Vince will serve as a producer (Photo: Ethan Miller/Getty Images)

WWE and Blumhouse Television have announced plans for a drama based on Vince McMahon’s infamous steroid trial.

The upcoming show, titled The United States of America Vs. Vince McMahon, is being developed by Jason Blum’s studio and will be the first-ever scripted dramatic portrayal of a chapter in WWE’s history, as well as the first time the wrestling mogul and many top superstars will be depicted in this way.

There is currently no writer attached, but we do know that the series will focus on the 1990s when the New York Post alleged in a number of stories that McMahon was giving his wrestlers steroids.

The coverage even caught the eye of the FBI and federal prosecutors, with the boss indicted on charges of possession of illegal steroids with intent to distribute and conspiracy to distribute steroids.

In a press release, the synopsis reads: ‘In 1994, the U.S. government indicted McMahon for allegedly supplying anabolic steroids to WWE talent.

‘McMahon, with his liberty at stake, two school-aged children at home and with WWE on the brink of bankruptcy, refused to take a plea deal. 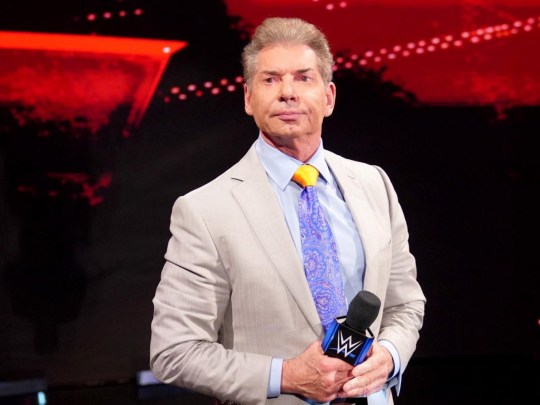 ‘Ultimately, McMahon stood trial and was acquitted unanimously by a jury of his peers and went on to build a multi-billion-dollar global sports entertainment empire.’

It should be noted that at the time of the trial, Vince’s son Shane was 24 and working with WWE behind the scenes, while his daughter Stephanie was 17.

Dunn said in a statement: ‘Jason, Chris and their team at Blumhouse create amazing work and we look forward to delivering an inside look into one of the most pivotal moments in our company’s history.’

‘We have a dramatic, riveting saga – one that’s crazier than fiction – that will appeal to the cross-section of Blumhouse and WWE fans,’ McCumber added.

‘To say I’m thrilled about collaborating again with WWE is an understatement.’

Meanwhile, the same period of wrestling history will also be addressed in an entirely separate project with no official involvement from WWE when Dark Side of the Ring resumes its current series later this year.

*A broadcaster has yet to be confirmed for the series.