BMF might have just come to a dramatic end but fans of Black Mafia Family will be thrilled to know the show is returning for a second season.

Indeed, Starz renewed the series right after its record-breaking premiere, and for executive producer 50 Cent, that had always been the plan.

Speaking to Metro.co.uk, the TV mogul made it clear that the show was set to branch out into new locations as he stated: ‘There’s so much to really get to…. they had business in St. Louis, we’ve got to get to Atlanta and we’ve still got to get to LA. And to Mexico to get the drugs.

‘In the first season, Detroit being the focus is cool, but we have so much to get to.’

He teased: ‘It’s almost like a different city every season we’ve got to get to, just tell a picture of the full story.’

The program tells the story of Demetrius ‘Big Meech’ Flenory, his brother Terry ‘Southwest T’ Flenory, and the loved ones who found their lives forever changed by the actions of Detroit’s infamous drug lords. 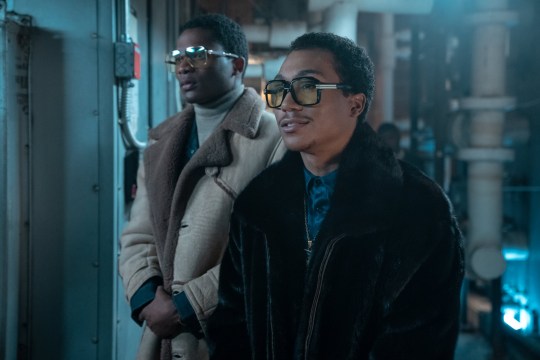 Opening up about his original plans for the hit series, the Candy Shop rapper explained that he had chosen to tell the pair’s story in the form of a TV series so that he could help the viewers get a full picture of the story.

The 46-year-old rapper stated: ‘We wanted to show that their choices were about, “How do we survive?”‘

The 21 Question hitmaker claimed that laying that groundwork in season one will allow the viewers to understand there had been ‘innocence’ before the drug lords ended up becoming famous for their crimes.

‘Usually, when we see the person has been successful so long, it’s pretty tough for you to have compassion for them because if you haven’t seen innocence and the choice to begin with,’ he explained. ‘You go, “How long you’ve been successful with this You’re a drug dealer so about time they caught you!”

‘Ain’t nobody sympathetic to that because they got away with it forever. Instead, we now have the viewer feeling something different, because they already are invested in the character at that point.’

Meanwhile, Da’Vinchi (who plays Terry ‘Southwest T’ Flenory), is excited to explore how things changed for the brothers as they got older.

‘It’s gonna be more of everything as they’re going to get older and more mature’ he stated.

‘That only means that competition is going to get worse… more money, more problems.

‘It’s definitely going to get even more intense. In season one, they start as the 50 boys in the world so now we’re slowly getting into the BMF portion of things and exploring how they build that.’

BMF airs on Starz in the US and is available on STARZPLAY in the UK.