Production on season two of Bridgerton has reportedly been shut down for the second time in a week due to a positive Covid-19 test.

The romantic period drama begin filming in locations across the UK in May, but suffered a setback on Thursday when a crew member tested positive for Covid, resulting in production being halted for 24 hours.

However, after getting back underway on Friday, production has ground to a halt again today, according to Deadline.

The website reports that Netflix has ‘paused production for an indefinite period of time’ following a positive test being returned.

While the streaming service did not confirm who had tested positive, Deadline suggests that the length of the hiatus ‘will lead to speculation that it could be an actor’.

The person who tested positive is now isolating.

As per data from July 16, there have been 277,995 new cases of Covid in the United Kingdom in the past seven days, as the Delta variant wreaks havoc. 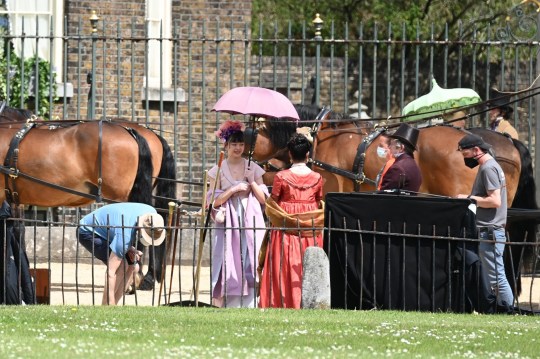 Filming for the show kicked off in May (Picture: BACKGRID)

In two days time, all lockdown restrictions in England will be lifted for ‘Freedom Day’.

Earlier this year, Phoebe Dynevor, who plays Daphne Bridgerton on the show, admitted that she had concerns about filming season two of the show during the pandemic.

The 26-year-old told Deadline: ‘I can’t imagine how it would be possible to film under these circumstances.

’There are so many extras and so many crew members, and it’s a very intimate show. It just baffles me how we would film it under Covid rules unless there was a vaccine beforehand.’

Bridgerton, based on Julia Quinn’s novels, was a worldwide success for Netflix when its first season was released on Christmas Day 2020, and became the most watched series on the streamer.

It has already been renewed for a second, third and fourth season.

While the majority of the main cast will return for season two, Regé-Jean Page will not be returning to play Simon Basset, the Duke of Hastings.

It is expected that the story will focus on Anthony Bridgerton, played by Jonathan Bailey.

Bridgerton season one is now streaming on Netflix.