Aidy Bryant, Ego Nwodim and Chloe Fineman were all left absolutely quaking as the British actor turned up his Duke Of Hastings charm to 11 in the opening monologue.

Launching with his opening monologue, the 31-year-old joked that Bridgerton was ‘the show that made everyone turn to their mums and say “you know what, never mind, I don’t think we should watch this together”.’

Aidy and Ego then jumped in to offer their services as his chaperone – telling him he could have anything he needed.

‘I have been getting a lot of this energy lately,’ he told them. ’But you can both relax – I am nothing like my character the Duke. I’m actually quite shy.’ 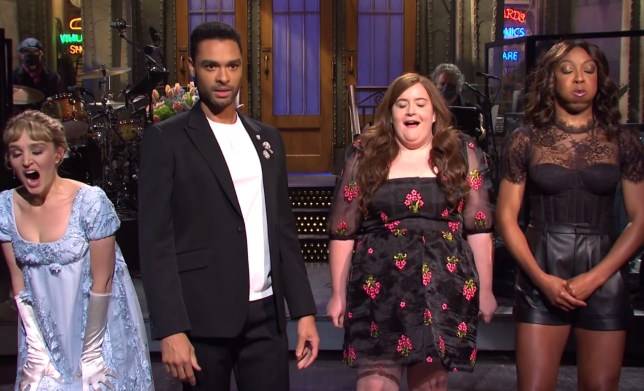 None of the girls could resist the charms of Regé-Jean Page (Picture: NBC) 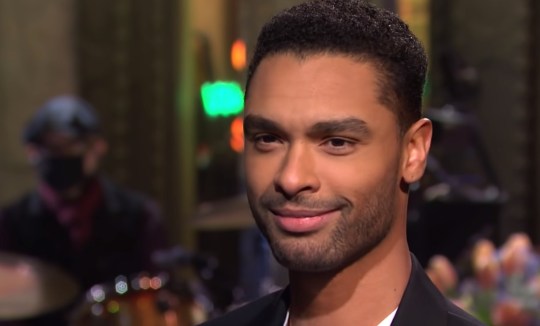 Then he shows off his vocal skills with a rendition of one of the most romantic songs ever – Unchained Melody.

Officially melting, the overload only gets worse when Chloe, dressed up as Phoebe Dynevor’s Daphne from Bridgerton, then makes an entrance to try and sway him further.

However, they officially melt when he utters the Duke’s iconic words: ‘I burn for you.’

Later on in the episode, Regé-Jean brings the Duke to SNL, just like fans were dying for… only this time there was a far less sexy twist. 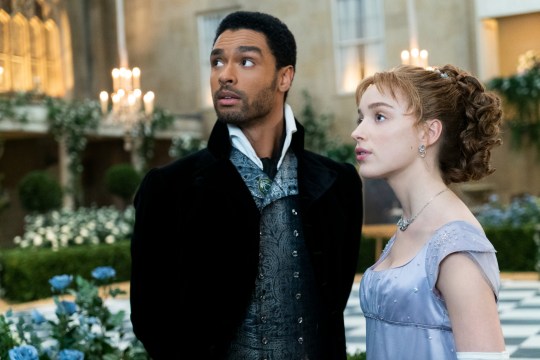 Bridgerton’s Duke left everyone hot under the collar (Picture: Netflix)

The sketch, set behind the scenes of filming Bridgerton, takes a turn for the awkward when the intimacy co-ordinators turn out to be a pretty creepy Pete Davidson and Mikey Day.

With Chloe returning as Daphne, Regé-Jean and his co-star look uncomfortable as they’re confronted with the proposals and ideas from the two crew members – who offer them used modesty socks for their private areas, and green-screen nipple coverings ‘so they can CGI in other nipples later’.

Somehow, we can understand why they weren’t so keen on these ideas.

Bridgerton season two has already been confirmed to go into production later this year, only this time The Duke and Daphne will take a backseat – with Daphne’s older brother Anthony becoming the newest lead in search of ‘The One’.

Saturday Night Live airs weekly on NBC in the US.