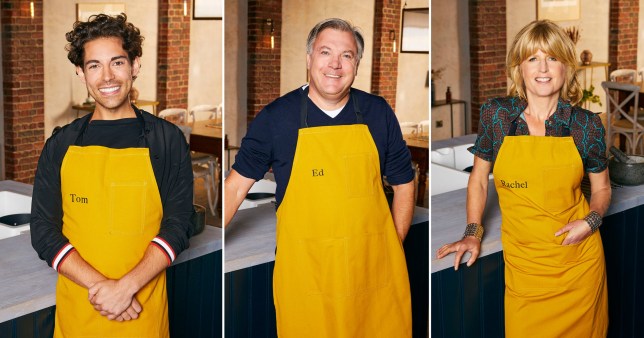 Fans of Celebrity Best Home Cook were treated to a tense final as Tom Read-Wilson, Ed Balls and Rachel Johnson battled it out to be crowned champion, with Ed eventually taking first place.

The final three were first tasked with making a dish from butternut squash, with Ed’s creation being the best out of the three on the judges’ taste test.

While he was then given a free pass to the next round, Tom and Rachel then had to face off against each other to see which of them would be eliminated and place third in the competition.

The pair were tasked with making a croquembouche – a tower of profiteroles – with spun sugar decoration in just one hour and 20 minutes.

Judges Mary Berry, Chris Bavin and Angela Hartnett judged the two pyramids of sweet treats anonymously, not knowing who had cooked each one to decide which amateur chef was worthy of staying on.

They ultimately decided Rachel’s was the poorer croquembouche, leaving her in third place and Tom and Ed set to go up against each other in the final challenge.

Mary tasked the final two with creating the ultimate picnic for 10 people, consisting of a meat dish, a fish dish, something plant-based and a sweet treat.

While both cooks prepared meals which were highly-praised by the judges and their fellow contestants – who had been brought back in to taste-test them – Ed was crowned the winner in the end.

Ed tweeted following his win: ‘Well well. That was a turn-up. What a brilliant cook ⁦@TomReadWilson⁩ is. #Celebritybesthomecook was such a lovely lockdown show with fab fellow cooks.

‘I’m dedicating the trophy to all the Mums & Dads who do their best & have a go in the kitchen. I hope my Mum will be proud.’

He also thanked Mary Berry and the rest of the contestants for making the challenge so much fun to take part in.