Channel 4 has addressed the claim that the revival of Changings Rooms is to be axed in the near future, emphasising that the show ‘continues to be a hit’.

This summer, Changing Rooms, the infamous DIY home makeover show, returned to our screens after 17 years, having previously drawn to a close on the BBC in 2004.

Interior designer Laurence Llewelyn-Bowen was the only original cast member to return, with Naked Attraction host Anna Richardson joining him as a presenter on the show along with several other new faces.

While Changing Rooms only made its comeback a month ago, it’s been reported that the show is already heading for cancellation.

According to The Mirror, following a decline in viewers, from 1.5m for the launch show to 500,000 a couple of weeks later, Channel 4 is considering the future of the series.

One said: ‘Channel 4 will be wondering what has gone wrong. A lot was put into it but it doesn’t seem to have caught on,’ while another remarked: ‘It won’t be missed.’ 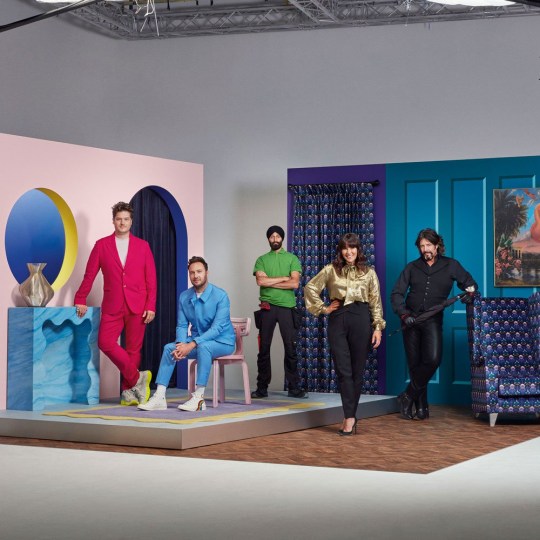 Is the new series of Changing Rooms destined to go the distance? (Picture: Channel 4)

Nonetheless, Channel 4 has stressed that people shouldn’t jump to conclusions about the future of the programme.

In a statement sent to Metro.co.uk, a spokesperson said: ‘It is far too early to have conversations about commissions however the show continues to be a hit, regularly securing over a million viewers.’

When Changing Rooms returned after almost two decades, it immediately reverted back to the chaos for which it became so beloved among fans.

Disaster struck straight away in the first episode, when the designers tried to create a hanging piece of decor that failed miserably.

The moment bore parallels to the infamous teapot controversy from the original show, when an entire collection of antique teapots smashed to pieces due to a hanging shelf that fell from the ceiling.

In the new series of Changing Rooms, Laurence and Anna are joined by designers Jordan Cluroe and Russell Whitehead and carpenter Tibby Singh.

The show follows members of the public as they swap keys with friends or neighbours, with each party being put in charge of decorating a room in the other person’s house.

Changing Rooms airs on Wednesdays at 8pm and is available to watch on All 4.