Police officer Sadie Byrne is at the centre of the investigation (Picture: Kevin Baker/Channel 4)

A new Channel 4 drama called Deceit launches tonight, telling the tale of a complicated investigation that went down a disastrous path following the brutal murder of a young woman called Rachel Nickell in 1992.

The four-part series stars Niamh Algar as undercover police officer Sadie Byrne, with the viewers watching the ‘honeytrap’ investigation unfold through her eyes.

After the police identified a man called Colin Stagg as a suspect in Rachel’s murder, they had the police officer, who went by the name Lizzie James, form a relationship with him in an effort to draw out a confession.

Also starring Ray Donovan actor Eddie Marsan and The Crown star Harry Treadaway, what is Deceit about, is it a true story and who else is in the cast?

What is Deceit about and is it a true story?

While Deceit is based on a true story, with the creators conducting thorough research and interviews, some scenes and characters have been created for dramatisation purposes.

On July 15 1992, Rachel was stabbed to death by a man while walking on Wimbledon Common in London with her two-year-old son, Alexander, who was not killed. 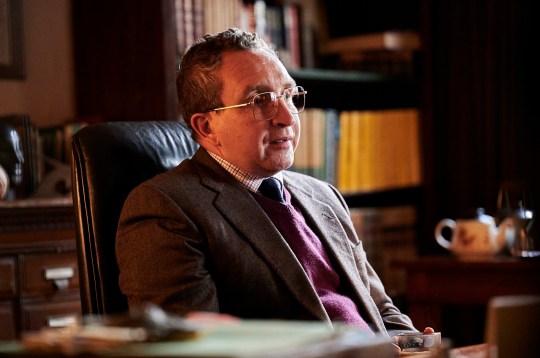 Several months after the murder, the Met Police were still trying to uncover the culprit, leading them to a man called Colin Stagg, who was first identified through a BBC Crimewatch appeal.

Colin, who was known to walk his dog on Wimbledon Common, was contacted by an undercover female police officer, who developed a relationship with him in an attempt to secure a confession.

After the police used the evidence they’d gathered on Colin to arrest him and put him on trial, he was found not guilty, with the judge stating that the police had tried to encourage him to make a confession by ‘deceptive conduct of the grossest kind’.

The police are determined to draw a confession out of Colin Stagg (Picture: Channel 4)

The man who killed Rachel, Robert Napper, was eventually identified by the police several years later using DNA forensic techniques, resulting in him being convicted of the crime in 2008.

The police officer at the centre of the investigation, named Sadie Byrne in the show, has had her name and other characteristics changed for legal reasons.

Who is in the cast of Deceit?

Calm with Horses actor Niamh stars as Sadie, the undercover police officer who adopts the persona of Lizzie in an attempt to gain the trust of Colin, the murder suspect played by Sion Daniel Young.

The part of Paul, the criminal psychologist who devised the profile of Rachel’s murderer, is Eddie, while Keith Pedder, the detective leading the investigation, is depicted by Harry.

The first episode of Deceit airs tonight at 9pm on Channel 4 with all four episodes becoming available to watch on All 4.