Disney has made history by introducing its first-ever non-binary character in the show The Owl House, and fans are overjoyed.

The programme follows teen girl Luz Noceda who falls through a portal into another world, and decides to go on adventures there.

Befriending Eda the Owl Lady, she soon becomes an apprentice to the mage in her Owl House, in order to come into her abilities and help fight evil that comes her way.

The character Raine Whispers was written into the programme, and they are described as a ‘sharp and hardworking Head Witch of the Bard Coven’ and a non-binary character, who made their first appearance in this week’s episode of the beloved Disney series.

Non-binary actor and voice artist Avi Roque is voicing the character and they revealed the exciting news on their Twitter account.

Avi said the role is a ‘dream come true’. 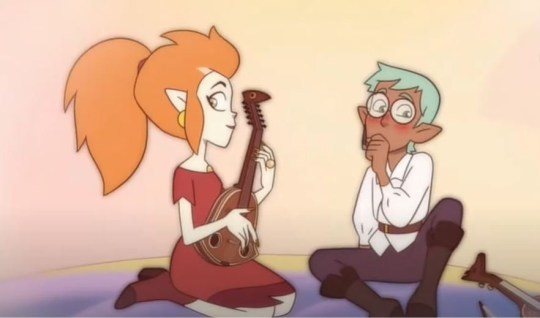 Fans of the show are overjoyed (Picture: YouTube/Disney)

The inclusion of Raine as a non-binary character brought a lot of joy to The Owl House fans.

‘This is amazing, I love that the character has a queer, non-binary latinx voice actor and that they’re non-binary themselves! That is so important for representation!’ one fan wrote.

Responding to show creator Dana Terrace’s announcement, one person said: ‘Thank you for writing a non-binary character into your show, it means the world to your trans fans.’

Another person added: ‘DANA THANK YOU FOR MAKING A NON-BINARY CHARACTER.’

the owl house season 2 just out there making history

AAAAA i’m so happy and proud of The Owl House for continuing to break down barriers in Disney TV!!! i love Raine already omg

This isn’t the first time that the programme has broken down barriers, as they were previously the first show on the Disney channel to ever to feature a bisexual leading character.

In the episode Enchanting Grom Fright, the character Amity revealed that she wanted to ask her best friend, leading lady Luz Noceda, to prom – kickstarting a relationship storyline.

Show creator Dana, who is also bisexual, spoke out about the decision and its importance for LGBTQ representation, thanking the studio executives for being open to the idea for the first time ever.

‘When I was first developing Owl House I always wanted to do a prom episode to make up for my own experiences,’ she wrote.

The Owl House airs on the Disney Channel.

The Demon took a nasty fall (Picture: WWE)Roman Reigns retained the Universal Championship as he overcame ‘The Demon’ Finn Balor...