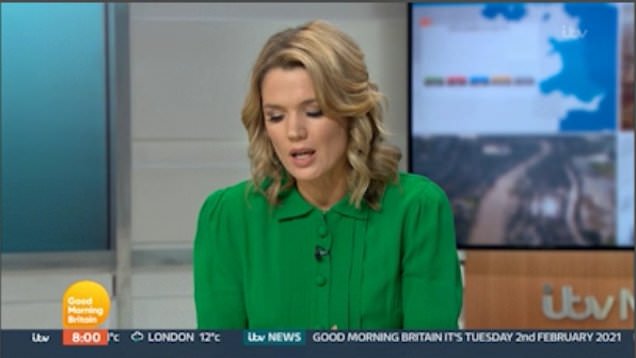 Good Morning Britain’s Charlotte Hawkins has responded to critics who said she was in a fortunate position to be able to self-isolate.

The presenter returned to the ITV show on Monday having quarantined for 10 days after coming into contact with someone with coronavirus, however, was bombarded with complaints that it was okay for her because she would be able to get paid despite not being in work.

‘There were a lot of people getting in touch with me yesterday on Twitter who were saying, “it’s okay for you in your position, you’ll get paid, you can afford to self-isolate”,’ Charlotte began.

‘Yeah, I know I’m in a fortunate position. I was told by my work to self-isolate and therefore it was straightforward for me to do it, but it is a legal requirement.

‘If you test positive or if you’re contacted by NHS test and trace and told to self-isolate, it is a legal requirement for you to do it. And also, you don’t want to put people at risk.’

She continued: ‘I didn’t want to put my family at risk, I’d hate to think I’d passed a potential infection on to somebody else and cause them serious illness. You just don’t know how it’s going to affect people.’

Charlotte went on and stated the Government help that is available, including the test and trace support payment of £500.

‘You should hopefully be entitled to statutory sick pay,’ she continued.

‘There are also universal credit employment support allowance and councils also have a discretionary amount of money that they can give to people.’

On Monday’s show, Charlotte told viewers: ‘I was really worried and I just felt that huge sense of responsibility of keeping my family safe,’ she told her co-stars.

‘It was a really tough thing to do.’

‘I can’t tell you how hard I found it having to self-isolate for ten days, & how relieved I am it’s over and all is OK,’ she penned.

‘Not being able to be near this special one… not being able to hug her was heartbreaking, but not knowing whether I had Covid or not meant I needed to keep my family safe.

‘I’m so relieved I escaped it & tested negative, I know so many others haven’t been as lucky. Sending love to all those going through it right now, & thinking of all those facing a tough time at the moment who can’t hug their loved ones.

‘It makes you so thankful for what you have. If you’re able to, hug them close tonight.’