Gogglebox fans were left laughing at their screens as Jenny Newby didn’t quite get the memo about a scene she was watching with best friend Lee Riley.

The Channel 4 show was back again on Friday night with everyone’s favourite professional TV watchers giving their verdicts on the biggest small screen moments of the week.

At one point, the sofa critics were shown a scene from You season three, in which Joe Goldberg (Penn Badgely) is fantasising about Marienne Bellamy (Tati Gabrielle) as he got intimate with another character, Sherry Conrad (Shalita Grant).

But Jenny clearly wasn’t quite sure what was going on, which made for very funny watching.

After Joe was seen only having Marienne on his mind, Jenny asked: ‘What’s she got to do with it then?

‘She’s thinking about her to get a hard-on,’ Lee told her, before Sherry was seen tearing open a condom wrapper with her teeth.


The pair watched a season from Netflix’s You (Picture: Netflix)

This left Jenny wanting to know the answer to a very important question.

‘What’s she eating a chocolate bar for then?’ Jenny asked, before Lee bluntly told her it was a condom.

‘I thought it was one of them chocolate bars!’ she said, as they both burst into laughter. 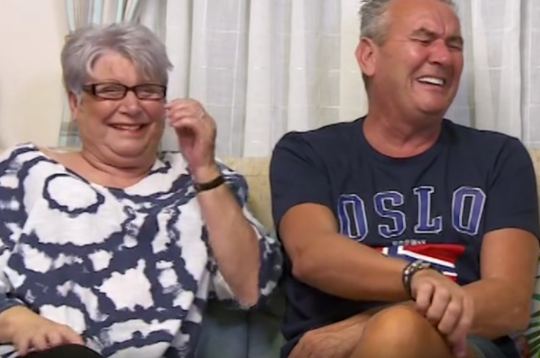 Jenny and Lee fully got the giggles after her error (Picture: Channel 4)

Fans were also left in hysterics over the moment too, taking to Twitter to share their love for the duo.

One wrote: ‘“Why is she eating a chocolate bar?” Jenny, you’re mint! LOL #YouNetflix #Gogglebox.’

A third added: ‘A chocolate bar, oh what you like Jenny #Gogglebox.’

‘Bwhahahaha Jenny “why she eating a chocolate bar” #YouNetflix  #Gogglebox,’ commented a fourth.

Another viewer wrote: ‘”What’s she eating a chocolate bar for” That’s me done hahaha Jenny is classic #Gogglebox.’

Jenny and Lee worried fans late last month when they failed to appear on the show, which they have been a part of since 2014.

But luckily, it later emerged they were just off on a trip abroad for Lee’s husband Steve’s birthday, with them sporting lovely tans as they arrived back on the sofa.