What does the Gossip Girl reboot have in store for us? (Picture: SteveSands/NewYorkNewswire/MEGA)

***Warning: Spoilers ahead for the Gossip Girl reboot ***

The Gossip Girl reboot has left viewers impressed, with many saying they prefer it to the original, and now we have been blessed with exclusive photos from the filming of upcoming episodes.

The new series picks up eight years after that killer twist in the original series, which (spoiler alert) saw Dan revealed as the iconic blogger Gossip Girl.

This time, fans have been introduced to a fresh group tech-savvy gang of privileged Constance Billard and St Jude’s students.

The scandalous lives of the new iteration of New York’s elite have not failed to shock and surprise after golden couple Audrey Hope (played by Emily Alyn Lind) and Aki Menzies (Evan Mock) ended up cheating on each other… with the same guy!

Naturally, we are desperate to know what happens now they’ve both had a taste of Max Wolfe. 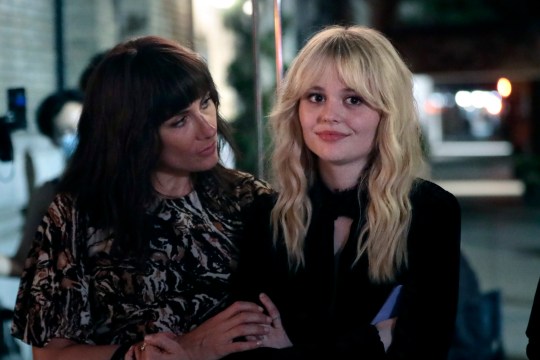 While we’ll have to wait for the next episode to find out more, new exclusive photos have given us a small taste of what’s to come.

In one photo we see Emily and Evan walking down the street with Laura Benanti (who’s playing Audrey’s designer mother Kiki Hope) in tow.

In another shot, Laura’s arm is wrapped around Emily’s as she smiles.

These photos beg the question, will Audrey tell Aki that she slept with Max?

If Audrey does confess, we have a feeling she’ll be very surprised to learn that her boyfriend had a nearly-naked makeout session with the very same person. 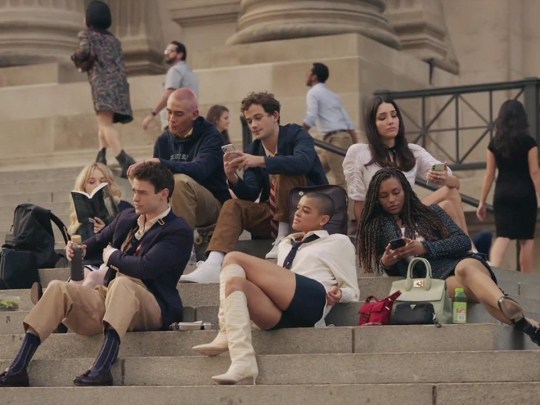 Considering the fact Max seems to have chemistry with everyone in NYC, we can’t tell if he’s actually interested in anything serious with either of his pals right now. So what on Earth happens next?

In a different photo, we see Whitney Peak (playing Zoya Lott) and Jordan Alexander (Julien Calloway) looking morose as they wear Christmas hats. Could this perhaps mean a Christmas special is being filmed? We will have to wait and see.

The show is being shot in a variety of locations that fans of the original Gossip Girl will most likely recognise.

It can’t be a reboot without the inclusion of the Metropolitan Museum of Art, which was featured many a time in the original series as a hangout spot for the crew.

The filming locations for the Constance Billard School for Girls is filmed at The Museum of the City of New York, which is where it was filmed for the first two seasons of the original Gossip Girl.

Gossip Girl airs Thursdays in the US on HBO Max. It will be available on BBC iPlayer later this year.