Owen Paterson resigned as MP for North Shropshire earlier this week after a lobbying scandal, which saw him made the subject of Ian Hislop’s latest rant on Have I Got News For You.

A recent report found the MP was being paid nearly three times his £82,000 salary to lobby ministers and officials on behalf of two private companies, which was due to see him suspended for 30 days.

However, the government later put forward and voted through an amendment which would have seen him avoid this.

After immense backlash, Paterson stepped down on Thursday and told his constituents he would ‘remain a public servant but outside the cruel world of politics’ after spending the week dominating the headlines.

On the latest episode of Have I Got News For You, team captain and Private Eye editor Hislop made sure to say his piece on the events, giving a passionate monologue to explain what happened, in a nutshell.

Hislop said: ‘There’s a man called Owen Patterson who was paid £100,000 a year to lobby on behalf of two companies, he did, the Commissioner for Standards looked into it and found he was guilty and said, you did it.


Ian hit out at the government over the saga (Picture: BBC)

‘He had, unbelievably clear cut, and then all his Tory mates started a campaign and the Prime Minister said, oh right, “We’re changing the entire system now.”

‘He was going to be suspended for 30 days, he said, “No he’s not,” and all the Tory MPs voted it through, I mean, they should all be ashamed of themselves, it’s absolutely disgraceful.

Hislop recognised there were a select few Conservative MPs who didn’t support the vote, such as Peter Bottomley, but added: ‘Basically they said, “If you criticise us, we’re going to change the system,” I mean, it was really quite shocking.

‘I think because the Parliamentary Commissioner for Standards had looked into the PM’s free holiday in Mustique, so I think it might be an act of revenge.

Ian spoke about the saga on Have I Got News For You (Picture: BBC)

‘I can’t prove that but I’m going to say that anyway,’ he remarked, which was met with applause from the audience.

Many watching at home praised his attack, with one writing on Twitter: ‘Ian Hislop on brilliant form in last night’s @haveigotnews [do watch it]. I think he’s teetering on national treasure territory. #ToryCorruption.’

Another said: ‘They could really do with promoting Ian Hislop to the BBC News Channel. This is the best summary of the whole Owen Paterson thing the BBC has aired.’ 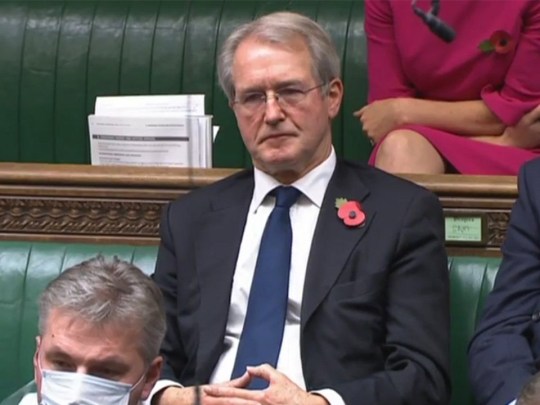 Owen resigned from his role on Thursday (Picture: parliamentlive.tv)

A fourth echoed: ‘Ian Hislop’s monologue on Owen Paterson situation on #HIGNFY last night was one of the most essential takes on current events I have ever seen. No laughter, not fishing for a joke, just one of the UK’s best ever satirists absolutely ripping chunks from a failing Government.’

Paterson was found to have lobbied the Food Standards Agency (FSA) a total of 10 times for both companies between November 2016 and July 2018.

He also made four approaches to the Department for International Development around the same time. His lobbying on behalf of Randox related to blood testing technology and the testing of antibiotics in milk, the commissioner said.

In a statement, Paterson said that he believed that he was acting in the interests of public health and safety.

Have I Got News For You airs Fridays from 9pm on BBC One.