Holly Willoughby rolls her eyes at Phillip Schofield cutting her off

There seemed to be a little tension in the air between the This Morning presenters as Holly Willoughby was spotted looking quite unimpressed by Phillip Schofield after he cut her off.

So unimpressed, in fact, that she couldn’t help but roll her eyes in the moment.

Holly, 41, and Phil, 60, were speaking to Polly Brooks MBE on the 20th anniversary of the Bali bombings earlier this week.

Listening to Polly’s emotional story about losing her husband in the bombings and having to ‘rebuild her life,’ Holly responded: ‘Wow, gosh.’

But before she could go on to say any further, Holly was quickly cut off by Phil saying: ‘43% of your body was burnt I think,’ before he asked Polly another question.

Holly fell silent after being brutally cut-off mid-sentence, but her face said it all as she clearly looked frustrated, and appeared to roll her eyes.

Sharing the clip to TikTok, one viewer who spotted the savage eye-roll captioned it: ‘Holly’s eye roll when Phil cuts her off.’

Other TikTok users shared their amusement in the comments, with one writing: ‘That was some side-eye slide.’

Another penned: ‘Holly has had enough,’ while someone else wrote: ‘Trouble in paradise.’ 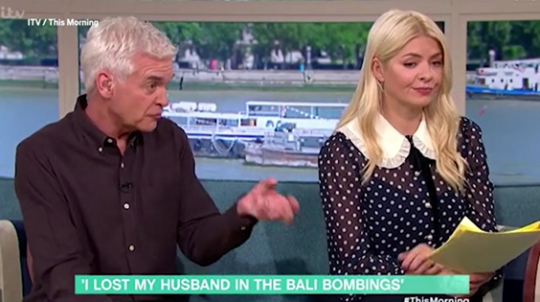 The moment comes after Holly and Phil faced intense backlash for appearing to skip the queue to see the Queen’s coffin lying-in-state at Westminster Hall.

Thousands waited for hours, including Susanna Reid and David Beckham, as the queue stretched back to five miles at one point.

ITV strenuously denied that Holly and Phil had done anything wrong, explaining they were there of members of the press and respected the rules in place for the media. 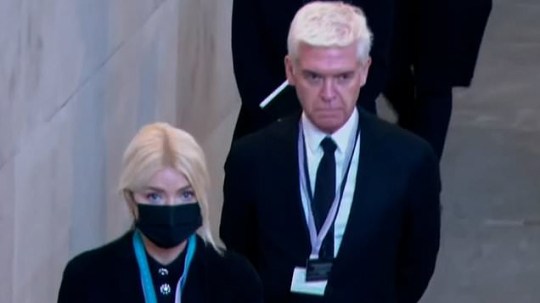 Despite the pair apologising on air for the controversial segment, and barely any Ofcom complaints being filed regarding queue-gate, a petition calling for Holly and Phil to be axed attracted more than 72,000 signatures.