Paddy will play the Targaryen patriarch in the highly-anticipated prequel series (Picture: HBO/Reuters)

House of the Dragon star Paddy Considine has revealed his mum played a pivotal role in informing his performance as King Viserys in the Game of Thrones spin-off.

Later this year, the new HBO series is set to launch, introducing viewers to a brand new batch of characters, including an array of Targaryens during the noble house’s prime in a tale set 300 years before the original series.

The actor recently explained that when playing the ruler of the Seven Kingdoms, it was important to ‘be compassionate’ and ‘just play the person’, adding: ‘And when I played Viserys Targaryen, I just played my mum, you know. That’s what I played – my mother.’

Speaking to The Independent, the 48-year-old said that his mother was ‘an anchor’ for him.

‘I loved her very much. But she was a woman who became very, very sick,’ he said, remembering how she suffered from diabetes, losing sight in both of her eyes and losing both of her legs. 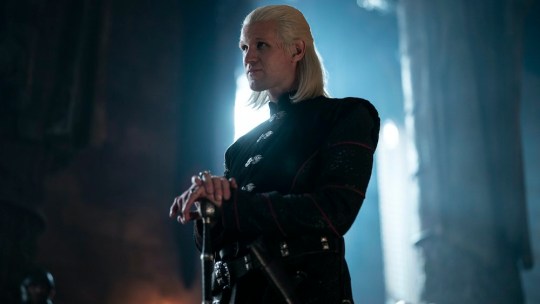 Matt plays the younger brother to the King, an experienced dragonrider (Picture: HBO)

‘She was in a terrible, terrible state. But I think she hid inside her illness, and that made it worse for her. And it was a lot for us and everyone around to care for her, whereas she needed to care for herself, too,’ he said.

‘And that’s what this character does, eventually, you know… he becomes very sick and hides in his illness.’ 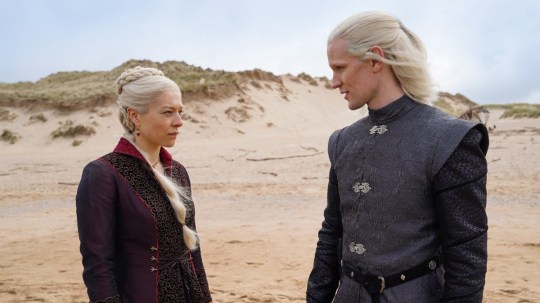 He added that King Viserys shares his ‘mothers passion and love for the people that are close to him’, showering his grandchildren with affection in the series, which isn’t known to happen that often in the fantasy franchise.

Paddy found that doing so brought ‘humanity’ to the character, adding: ‘I just used my mum as the template.’

In February this year, George RR Martin – who wrote the book series A Song of Ice and Fire on which Game of Thrones is based – teased fans when he revealed that he was ‘loving’ what he’d seen of House of the Dragon so far.

‘I have seen rough cuts of a few of [the episodes], and I’m loving them,’ he said.

‘Of course, a lot more work needs to be done. Special effects, color timing, score, all the post production work.’

House of the Dragon will premiere on August 22 on Sky Atlantic and streaming service NOW.