Caption: How I Met Your Mother spin-off full cast revealed

How I Met Your Mother spin-off show has revealed who will join the new gang.

Previously announced stars of How I Met Your Father include Lizzie McQuire icon Hilary Duff and GLOW’s Chris Lowell.

Duff’s character Sophie will lead the show, telling her son the story of how she met his father over a 10 episode run.

That’s what season one of the original show also set out to do but it ended up taking over 200 episodes and nine years to get to the bottom of it.

Of course, the show will focus on other aspects besides the hunt for a man as Sophie and her confidants navigating an existential crisis and bond over how to make the most of today’s limitless options. 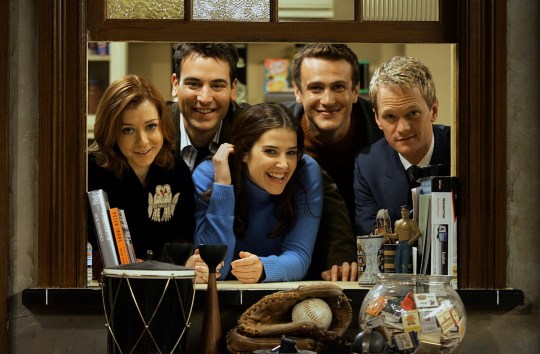 The smash-hit series chronicled the life of 30-somethings in their search for The One (Picture: CBS)

Lowell will play Jesse, an aspiring musician who works as an Uber driver to make ends meet. His character is described as having ‘a bit of an edge and cynical about love’ so he could be Sophie’s unattainable love interest.

Living with Jesse is his friend Sid, played by Sharma. Sid is a new bar owner and his personality is the complete opposite of that of his roommate.

Raisa plays Sophie’s friend Valentina. The two live together and Sophie relies on Valentina – an ‘impulsive and adventurous’ aspiring stylist – for humour in her life.

Rounding up the gang, Tran will play Ellen, Jesse’s adopted sister who just moved to New York from a small country town after separating from her wife.

Finally, Ainsley will portray Charlie, an aspiring model who comes from a conservative and aristocratic family who fell in love with Valentina at London Fashion Week and followed her to the Big Apple.

Unfortunately, no release date has yet been confirmed and while the show will air on Hulu in the US, a UK broadcaster or streamer has not yet been found.

Since this is the fourth attempt at creating a female-centred spin-off show since the first script in 2013, fans should be able to wait a bit longer knowing this one will definitely be happening.

Duff will also act as a producer on the series which was written and created by This Is Us and Love, Victor’s Isaac Aptaker and Elizabeth Berger who will act as showrunners alongside the creators of the original series Carter Bays and Craig Thomas.