With his inability to pull or even get snogged in the games, Hugo has attracted a very sympathetic fan base so far this series but I still have to say that his dumping of AJ Bunker made for unpleasant viewing.

Two things were clear when AJ shimmied her way into the villa to perform some industrial-strength flirt displays: Firstly that she had been sent in as a rescue party for the only guy who had been uncoupled and un-loved for the whole run.

Second obvious fact though was that she was completely, utterly and almost comically wrong for the PE teacher. Her come-on seductions and his looks of barely-supressed fear looked straight out of a Carry On movie.

The guy on a full-time drought had to turn the offer of a glass of water down then, but how was he going to do it?

How does a ‘good guy’ dump someone? Well the answer was not in the way that Hugo chose.


Hugo had his hair in a middle parting as he ended things with AJ (Picture: ITV)

Dressed like a comedy geek, Hugo decided to use the body language, vocal tone and words of a rather superior bank manager turning someone down for a loan and directing them to another bank in the high street.

When he first sat down we saw AJ about to launch into tactile flirt mode but one small touch of his middle-parted hair and she clearly felt the frost and retreated to try to protect her dignity.

She has come on so strong with Hugo that his rejection was always going to be tricky. Other ‘couples’ have been aware there was no real interest on either side but AJ had bravely thrown her hat right into the Hugo ring, making a loss of face almost inevitable.

Hugo might have got away with a ‘You’re just too gorgeous for me, you deserve one of those Love Island sex gods’ but instead he took a superior tone and managed to come across sounding patronising. 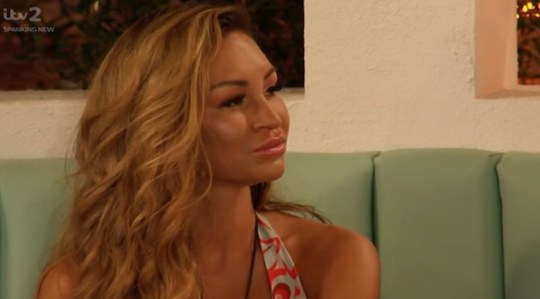 His preen gestures when he sat down and asked ‘What do you think of my hair’ invited flattery and involved a pit-bare gesture that showed confidence.

He then flipped into Bank Manager/school teacher mode with his: ‘To be honest I’ve been wanting to talk to you anyway’, plucking at the shoulders of his shirt and performing a double pit-bare as he did so.

There was no eye contact and he told her that he thought they’d be ‘better off as friends’.

Usually with a polite public dumping the ‘friends’ bit needs to be an ask not a tell. It’s not really polite to assume that the girl whose advances you’re rejecting will want to be your friend afterwards. 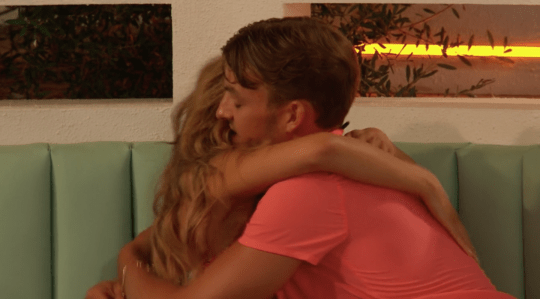 The pair hugged after Hugo called it oof (Picture: ITV)

Hugo then topped it off by telling AJ that she should try her luck with Danny instead. Rejection and re-direction is not a good technique as the underlying message will be ‘I don’t fancy you but I think my mate might’.

The oddest part of his dumping of AJ though was after their hug when he told her ‘Absolutely, my pleasure, it was the least I could do’ as though he’d just bought her an amazing gift.

He then went off to tell friends what he had done, laughing as he sat down and even shushing them and telling them to ‘breathe’ when they sounded surprised.

I’m going to assume most of this was unintentional and that he still is the good guy in there. Perhaps he just got his order of service wrong. ‘I think you and Danny have chemistry and so I am going to step back’ might have been less wounding for AJ but ‘Best for me and best for her’ didn’t quite sit with the expression on AJ’s face as he was telling her.