Is Come Dine With Me filmed over a week? 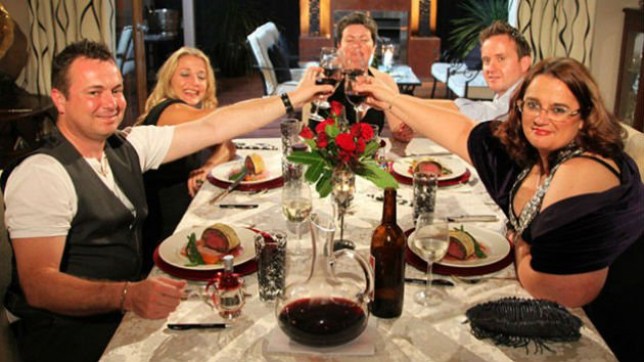 Strangers will try to impress one another with their best cooking and hosting skills. (Picture: Getty)

Come Dine with Me has been on air for over 15 years, and has become a classic must-see for many, who tune in for everything from Dave Lamb’s sarcastic narration to the often cringe, awkward inevitable things that always seem to happen.

If you’re less familiar with the show, five strangers come together to visit each other’s homes over a week, where each one will take a turn in cooking and entertaining.

The other four will judge them, with the maximum score being a perfect 40. The person with the highest score of the week will win the cash prize.

But, how true to life is the filming? If you’ve thought about applying, how much of a commitment is it?

Does all the filming happen over the week, or are there gaps between filming?

How long does it take to film Come Dine with Me?

It turns out they do film Come Dine with Me over the space of a week.

So, any time contestants might have bumped heads and then had to see each other the next day is all true – which could explain certain outbursts in the past.

Former contestants have said the introductory interviews happen in local pubs and restaurants on the Monday. This is where contestants are given their first menu.

Filming reportedly takes place across eight hours every evening, meaning every episode is the result of up to 40 hours of footage.

Are Come Dine with Me contestants paid for their week of filming?

For a week’s worth of filming, you might think Come Dine with Me contestants get some financial compensation, but they do not.

They do, however, each get £125 to spend on their food and drink for their evening hosting.

And, of course, they have the potential of winning the £1,000 cash prize.

Come Dine With Me airs weekdays on Channel 4 from 9.55am.