JEREMY Clarkson branded a Who Wants To Be A Millionaire contestant an “idiot” after he used one of his lifelines on the FIRST question.

During tonight’s episode of the ITV quiz show, legal assistant Connor Kim didn’t get off to a very good start after he stumbled at the £100 question about a famous singer. 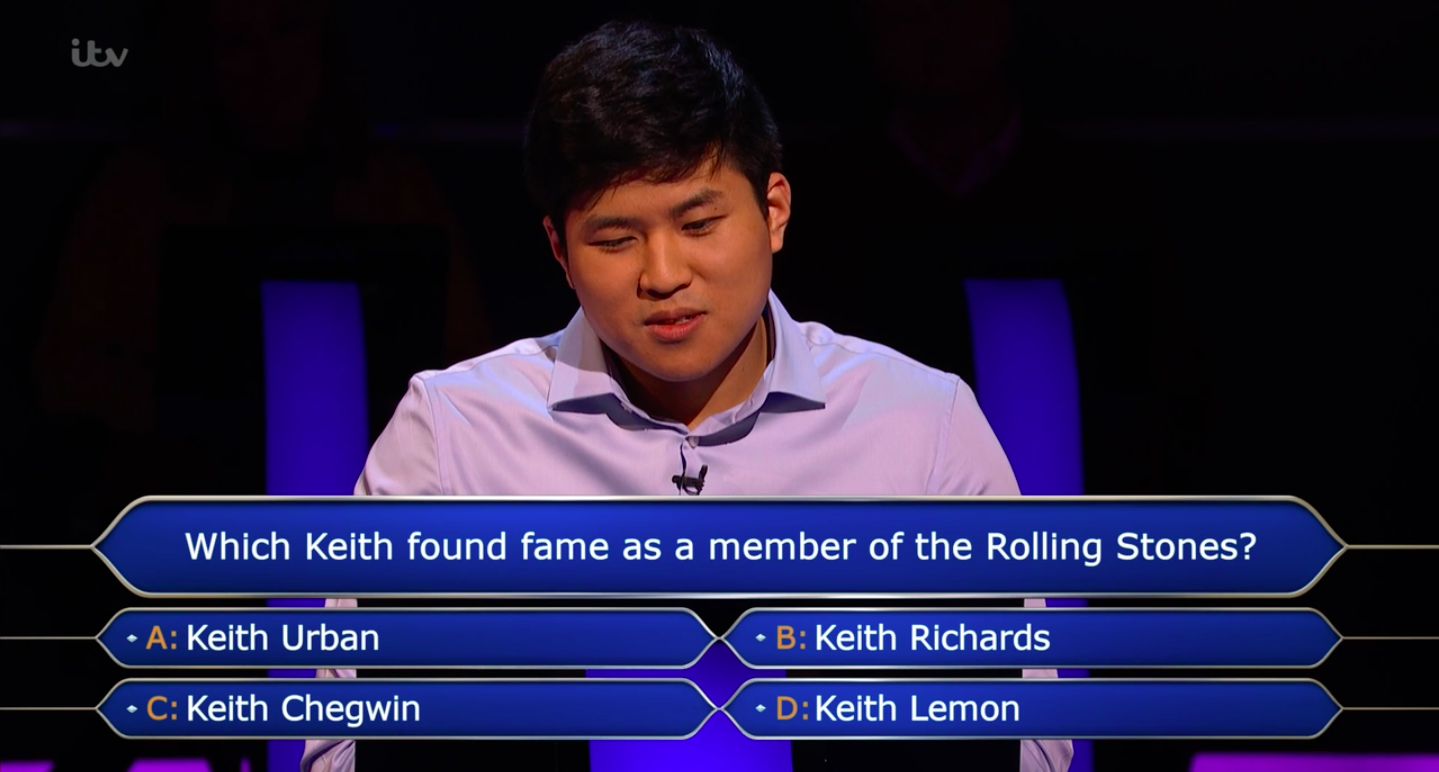 Host Jeremy asked which out of Keith Urban, Keith Chegwin, Keith Richards or Keith Lemon was it that found fame in popular 60s band The Rolling Stones.

Connor wasn’t confident with his answer, but had an inkling it was either co-founder of the rock group Richards or telly presenter Chegwin.

As Jeremy giggled away to himself, he said: “I can hear the crew laughing. I can tell you I don’t think this is really breaking with the rules too much, one of those is hilariously wrong.”

Connor replied: “God I’m going to look like an idiot on TV.”

God I’m going to look like an idiot on TV

The presenter hit back: “No no you already are doing!”

Connor had a feeling that the answer was Keith Richards but he still wasn’t 100 per cent, so he decided to ask Jeremy for help.

The former Top Gear star confirmed that his guess was correct, but fans of the ITV show were left in shock that Connor had to use a lifeline on the FIRST question.

A third chimed in: “I have got no bloody hope for this guy on now #WhoWantsToBeAMillionaire.”

Another wrote: “Never forget the contestant who used a lifeline on the first question #whowantstobeamillionaire.”

Despite his slow start, Connor ended up leaving the studio with a whopping £135,000.

It comes after a contestant called Somebi was left stunned after Jeremy Clarkson gave him the correct answer to a £64k question.

He was struggling to answer a question about bears and asked the star for help by using the ask the host lifeline.

The question was about which species of bear originated from South America, with the possible answers: Sun bear, spectacled bear, black bear and brown bear.

Jeremy called the contestant a “lucky, lucky man” as the host revealed he had travelled to Colombia and found the spectacled bear as part of an episode of his Amazon Prime show The Grand Tour.

He explained that he even took a photograph of the bear in the wild himself.

He was very confident in his answer and Somebi was right to trust him as it landed him £64,000.

Somebi ended up walking away with the massive sum – and was very happy with the result.

Who Wants To Be A Millionaire? is available to watch on ITV Hub.