Jeremy Clarkson has said that the coronavirus crisis forced The Grand Tour team to be on their ‘A-game’ during filming.

In The Grand Tour Presents: Lochdown special, part of a double bill on Amazon Prime Video, Jeremy is joined by co-hosts Richard Hammond and James May as they take a trip to the Scottish Highlands in vintage cars from the 1970s.

The highly-anticipated programme was filmed last year in between lockdowns, with the presenters forced to film in the UK rather than different locations abroad due to the pandemic.

Jeremy has explained how the COVID-19 pandemic changed their approach to filming.

‘Filming in COVID, I don’t know, it’s sort of forced us to be on our A-game really because the risk was so intense,’ he told RadioTimes.com.

Jeremy admitted that the pandemic created a logistical nightmare for the cast and crew of the show.

‘I mean, there may be 50 people in the crew, and we couldn’t just take 50 rooms in a hotel, we had to take over the whole hotel because this was the protocols that were given to us. We had to bring in our own catering staff, we had to have our own Covid testing people with us.

‘We all had to be tested every day and if anybody failed, even any one
person failed, then the whole ship had been abandoned, which would have
been financially ruinous, so it was a big team effort.’

The veteran presenter hopes fans will see and understand the efforts
they’ve made in order to create the show amid the pandemic.

He said: ‘I think it shows in the special we’ve made. We were right at the top of our game on that one. And it’s a … It’s like Grand Tour Unplugged really, because we’re not abroad – you don’t have scenery to fall back on or volcanoes, it’s just rain.

‘We had to provide the entertainment and I think we’ve done a pretty good job.’ 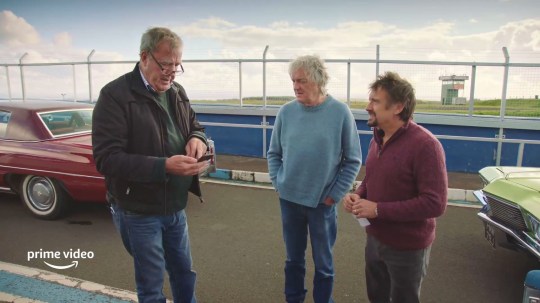 The trio adventure around Scotland for the special (Picture: Amazon/TNI PRESS LTD.)

The Grand Tour presenters have worked together for years and love to prank each other, with their Lochdown special featuring one of their very best antics.

Speaking to Metro.co.uk and other press, James said that he’s already plotting his revenge on co-star Jeremy, after Jeremy and Richard had the idea to pump thousands of litres of water into James’ vehicle behind his back while he left the vehicle unattended at a pitstop.

When James came back and spotted a leak, he opened the caravan door and tonnes of water knocked him to the ground.

‘I do have a couple of big ideas lined up for Clarkson,’ James admitted. We’re intrigued!