Life on Mars creators Matthew Graham and collaborator Ashley Pharoah have penned the pilot for the follow-up series Lazarus.

The BBC drama – which is a reference to David Bowie’s 1971 hit – followed Detective Inspector Tyler, (John Simm) struggling to come to terms with waking up in 1973 following a near-fatal car crash.

Both John and his co-star Phil Glenister (DCI Gene Hunt) previously hinted that they wouldn’t turn down the opportunity of reprising their iconic roles, with John recently teasing that bosses came up with a ‘brilliant idea about how it could come back.’

And the pair even threw some keywords for viewers to look out for.

The tweet read: ‘So Ashley Pharoah and I have completed the pilot script for Lazarus. It contains the words – Hanging, Boogie, Creme Fraiche.’

So @AJPharoah and I have completed the pilot script for #Lazarus.
It contains the words –
Hanging
Boogie
Creme Fraiche

It’s safe to say fans were hyped over the announcement, with one writing: ‘This is so exciting! I hope #Galex will also be included – no matter how much I love Gene and Sam, it won’t be the same without Alex Drake.’

‘I’m just going to put it out there, I love you and @AJPharoah so much right now! You’ve made my year! Legends the pair of you!!’ another added. 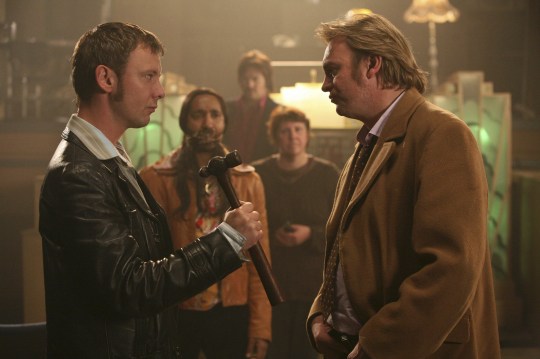 The creators confirmed they have written the third sequel (Picture: KUDOS)

Although a pilot has been written, the BBC are yet to confirm whether the series will be commissioned by the broadcaster.

Life on Mars nabbed the prestigious pioneer audience award for the best programme at the Bafta TV awards in 2006.

The success of the British original series sparked the Ashes To Ashes sequel – which ran from 2008 to 2010.

The series followed police officer Alex Drake, played by Keeley Hawes, who was shot in 2008 by a man called Arthur Layton and inexplicably regains consciousness in 1981.

Series one and two of Life on Mars is available to watch on BBC iPlayer.