Hugo called it off with Georgia (Picture: Rex)

Love Island’s Hugo Hammond ended things with new arrival Georgia Towend in scenes that aired tonight, citing he didn’t feel a ‘spark’ between them. She was later dumped from the villa.

Georgia entered the series on Wednesday alongside fellow contestants Tyler Cruickshank and Abigail Rawlings and quickly made a move on the former PE teacher by telling him she was interested.

However, her advances were shut down in this evening’s scenes when Hugo pulled her over for a chat.

‘I just want to let you know where my head is at,’ he told her. ‘I’m just going to be completely honest with you, from that first chat, I didn’t get that spark.’

‘Absolutely no worries whatsoever,’ Georgia replied, before thanking him for being honest.

‘Everyone is in here trying to find that right person and it would be worse if you were like, “yeah let’s continue” without having these feelings and not being honest,’ she added. 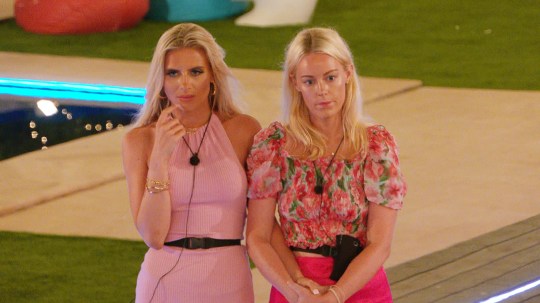 Georgia was later dumped from the villa (Picture: ITV)

Hugo’s dumping comes just days after he also pied off AJ Bunker, even going as far as telling her to try things with Danny Bibby.

Understandably, viewers didn’t waste any time in venting their frustration at the whole shebang, with one going as far as to brand Hugo a ‘lost cause’.

Okay no sorry Hugo needs to leave immediately why havenât you clicked with ANYONE?! Be GONE #loveIsland

Hugo is a lost cause at this point. He donât want no girl that likes him, what is his purpose other than washing the islanders pant? ð¤ð¤ð¤ #loveIsland

‘Okay no sorry Hugo needs to leave immediately why haven’t you clicked with ANYONE?! Be GONE’ one fumed.

Echoing a similar sentiment, another added: ‘Hugo!!! How many girls need to be in to you before you find this spark you are looking for sir?!!’

Hugo had all the power in tonight’s recoupling and chose to partner with Chloe Burrows, ultimately sending Georgia home.

Love Island continues on Friday at 9pm on ITV2.