Kaz and Tyler enjoy a moment on the balcony (Picture: ITV)

Love Island’s Kaz Kamwi may have finally found her match in new bombshell Tyler Cruickshank and viewers couldn’t be more excited about it.

The new contestant entered the villa tonight alongside Georgia Townsend and Abigail Rawlings not long after Danny Bibby and AJ Bunker had been dumped from the series.

Tyler and Kaz enjoyed a flirty chat on the sun loungers where she confessed to him that he’s her type, and judging by the preview for Thursday’s episode he also feels the same way.

In the spoiler clip, the pair appear to be seen snogging on the terrace, much to the delight of fans.

While the video didn’t identify the couple per se, the two islanders in the shot were wearing the exact same clothes Kaz and Tyler had been wearing in tonight’s episode. 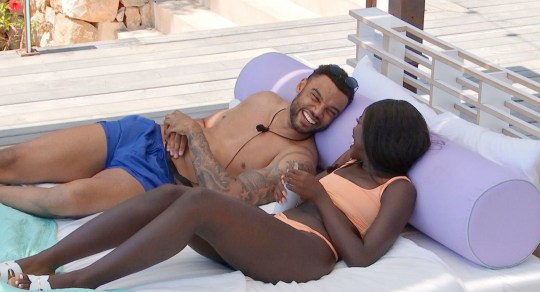 Tyler and Kaz got talking on the day beds (Picture: ITV)

Overjoyed by the scenes at hand, viewers raced to Twitter to celebrate the romantic kiss.

‘YESSSSSS KAZ AND TYLER I KNOW THATS RIGHT!!’ one enthused.

Echoing a similar sentiment, another added: ‘Tyler and Kaz, you have my blessing. Go forth and win!’

Tyler and Kaz, you have my blessing. Go forth and win ðð½ #loveIsland

Tyler is a 26-year-old estate agent from Croydon, south London.

Prior to entering the Love Island villa, he revealed that he did have his eye on Kaz, saying: ‘She just looks like she has so much energy about her. You kind of need it if you’re surrounded by people all the time.

‘If you were feeling down, Kaz would be the person to uplift you.’

He’s been single for three years and is feeling ‘competitive’ so the coupled up islanders might want to keep an eye on Mr Steal Your Girl.