Before it was announced that two islanders would be dumped and three new bombshells are headed into the villa, the 21-year-old student from Birmingham had a debrief with the girls on the terrace about her bedroom antics.

Faye Winter asked Liberty whether they had a ‘1-1’, with Chloe Winter kindly explaining in the Beach Hut: ‘So one all is, basically doing bits, one all.

The girls continued to speculate using football analogies while Liberty sat back and enjoyed their guessing games.

‘I’m just going to sip my tea and mind my own business,’ she said, before adding: ‘There’s you guys thinking this is the first time.’ 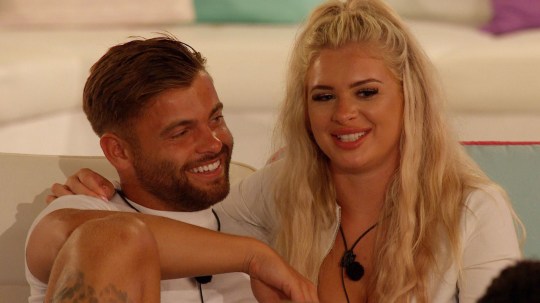 Liberty and Jake have been coupled up since the first day (Picture: ITV)

Viewers weren’t as enthused, however, with many fearing that Jake’s head will turn when Casa Amor returns.

‘I hate to say it but Jake is still going to Casa Amour Liberty and I’m just mentally preparing for it,’ wrote one.

Anyone else have a horrible feeling when casa amor comes round jake is going to stray and Liberty will stay loyal and end up getting her heart broken? Just me? ð­ #LoveIsland

I just donât know what it is about Jake, but I just donât quite trust him yet still and until he comes back from Casa Amor alone, we must protect Liberty at all costs! #LoveIsland

Elsewhere tonight, the islanders were gathered around the fire pit where they learned news of another impending dumping.

Hugo receives the next text which read: ‘The public have been voting for their favourite girl and favourite boy. Those with the fewest votes are at risk of being dumped from the Island tonight.’

The three girls who received the fewest votes and therefore are at risk of being eliminated include Lucinda Strafford, Chloe Burrows and AJ Bunker.

Who will be safe and who will be left at risk of leaving the villa?

Love Island continues on Wednesday at 9pm on ITV2.